Kings Shield (133lb) has developed into a dominant force on the dirt in Hong Kong and this Sunday at Sha Tin he’ll look to stamp his authority on the surface once again in the Class 1 Egret Handicap (dirt, 1650m), doing so with a trip to Dubai on the radar.

“Everyone knows he is a dirt horse so I think he has a really good chance - he just needs to carry a big weight,” Lor said of the British import, who holds top billing on the dirt in Hong Kong as a 109-rater after scoring his third course and distance win last November.

But that was his last run on the surface and, with high class dirt races a rare commodity in Hong Kong, Lor is eyeing the US$750,000 G2 Godolphin Mile (dirt, 1600m) on Dubai World Cup night (Sunday, 27 March) and will look to take Glorious Artist, too.

“I have already entered both horses for the race – Glorious Artist also, so we’ll see with the virus if they can go,” Lor said.

Between runs, Kings Shield has remained fit with two runs on the turf, most recently a last-placed effort to Champion’s Way in the G3 Chinese Club Challenge Cup Handicap (1400m) a fortnight ago.

“You need to race him, you can’t just trial him, it’s not enough so if there’s a race on the turf I’ll put him in,” Lor said of the American-bred who is a much less imposing figure on the turf in Hong Kong with only one top-three finish from 14 tries on the surface.

Kings Shield has made all in each of his three Hong Kong wins and this weekend will be ridden by Australian ace Zac Purton against six others, including six-time dirt winner Elusive State (121lb), stablemate Glorious Artist (119lb), Red Desert (117lb), Encore Boy (113lb), Green Luck (113lb) and Circuit Glory (113lb).

Prior to export, the American bred raced under the care of John Gosden in Great Britain, finishing fifth in the 2018 G1 St. James’s Palace Stakes (1594m) at Royal Ascot.

Lor also saddles Glorious Artist, who will shoot for a hat-trick of wins in Sunday’s HK$3 million dirt feature.

“He’s already won twice this season and I think he’s held his form really good, so I think he has a chance,” the handler said.

This Sunday, Derek Leung will take the reins for his hat-trick bid and the pair will set off from gate seven, while stablemate Kings Shield breaks from gate three.

But Lor was quick to separate his duo.

“For me, Kings Shield still looks better than Glorious Artist,” he said.

“This time we put him back to 1200 metres and added the blinkers which should be better for him - he also has gate five,” Lor said.

“Last time I tried him over 1400 metres but we got an outside draw and because he needs to be used up early that could be the reason why he didn’t finish off last time,” he added.

Wellington bids for a repeat

“All the racing fans get behind these improving horses – it makes you very motivated to train, we’ll just keep looking after him and see how far he can get up the rankings,” Gibson said.

A winner of four from five starts, the All Too Hard gelding returned from an eight-month break last month with a two and a quarter length triumph over 1000m at Sha Tin, firmly pushed out by champion jockey Zac Purton to earn every inch over the concluding stage.

“It was a decent performance, he was a bit raw and fierce at the beginning of race but in the end he almost struggled a bit to complete it but he’d only had a couple of trials so he was a bit short on fitness,” Gibson said.

“We’re very happy, the horse has responded well to the race and did a nice piece of work on the turf last week with Zac (Purton) – all lights are green for Sunday,” Gibson said.

Purton will again take the reins atop the gelding and the duo will break from gate 10 against 13 others.

“I’m not one to really talk up my horses - I much prefer that they do the talking on the track but this horse is fast, he’s a fast horse and I think after this race we’ll see him step up to 1200 metres and if see if he can front up against the big boys,” Gibson said of his 88-rater. 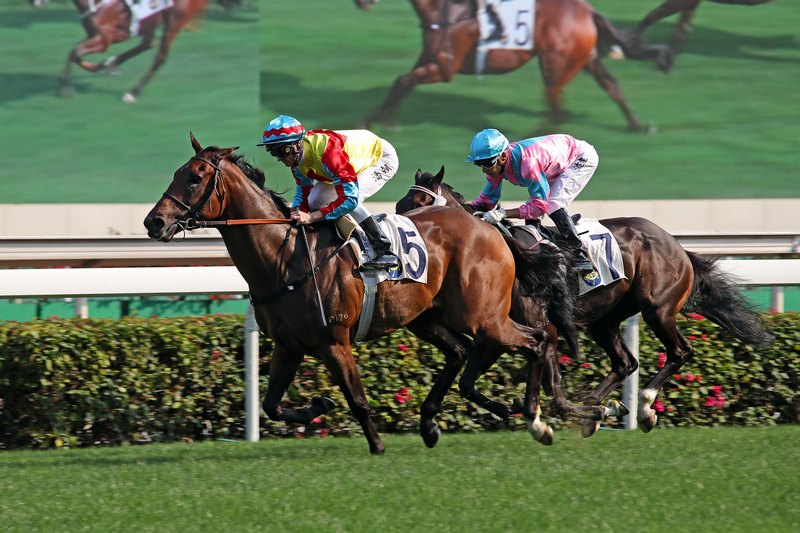