Doubles for Dettori and Godolphin at Meydan

Ridden by Antonio Fresu, sporting the green and yellow checks of Nasir Askar for trainer Musabbeh Al Mheiri, the 6-year-old gelded son of Dubawi was one of a host of the 11 runners settled in just behind early leader Capezzano who was still ahead entering the final 350m. However, he had no answer when challenged by Fresu’s mount who hit the front, tracked through by Salute The Soldier who threatened briefly, but ultimately lost second to Thegreatcollection who finished fast and late to claim the runner-up spot on the podium.

Winner of the 2000m Listed The Entisar in December 2019, Military Law only ran twice more last season, finishing second in both the 1900m Group 2 and 2000m Group 1 second and third rounds of the Al Maktoum Challenge. This was his seasonal debut and first since chasing home Matterhorn in the last named race on Super Saturday last year.

Fresu said: “This is just a lovely horse, a true gentleman and an absolute pleasure to be associated with. We only ran him four times last season and he was progressive over further, but we thought they would go quick here which would bring his stamina into play. Luckily that proved the case.
“It is particularly special for me because I ride him every day so I knew he was a lot stronger and, basically, a better horse this season so we waited for this race.” 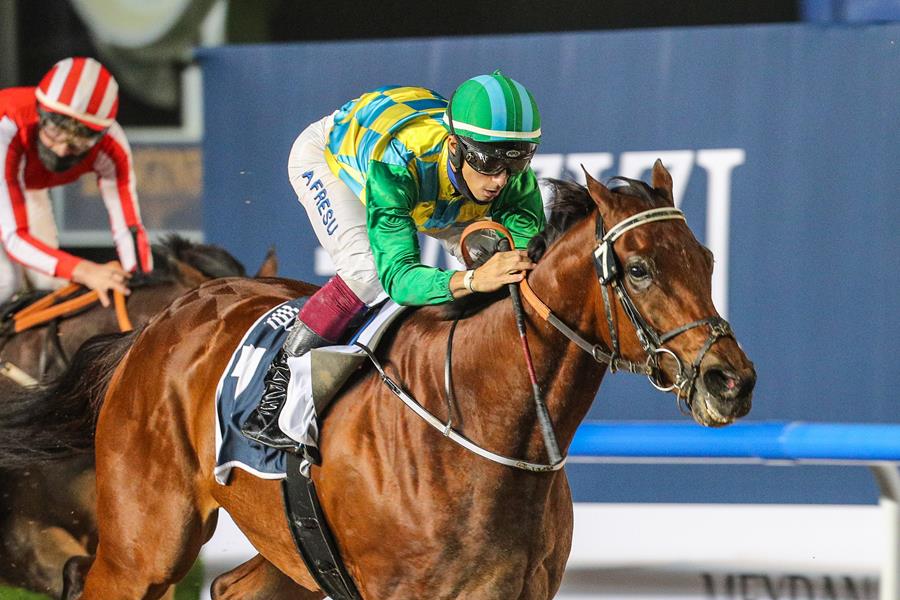 Few jockeys ride the Meydan turf track better than Adrie de Vries and he was seen at his very best aboard Lord Glitters, impressive winner of the 1800m Group 2 Singspiel Stakes sponsored by Riviera By Azizi. Virtually last of the 11 runners entering the long Meydan straight, De Vries crept closer aboard the massive 8-year-old grey gelded son of Whipper before pouncing on Art Du Val about 300m out. Once in front they were never going to be caught.

Trained by David O’Meara and thus opening the international account at the 2021 carnival, Lord Glitters was winning for the first time since his career defining victory in the 1600m Group 1 Queen Anne Stakes at Royal Ascot in 2019. His most recent outing had been in Bahrain when not beaten far, finishing fifth in the Bahrain International Trophy.

De Vries said: “I rode a winner for the trainer a couple of years ago so was delighted to ride for him again. It probably did not go totally to plan because we missed the break a bit, but after that it all went smoothly.

“I just took my time and, in the straight, he just powered home in the style of the very good horse we know he is.” 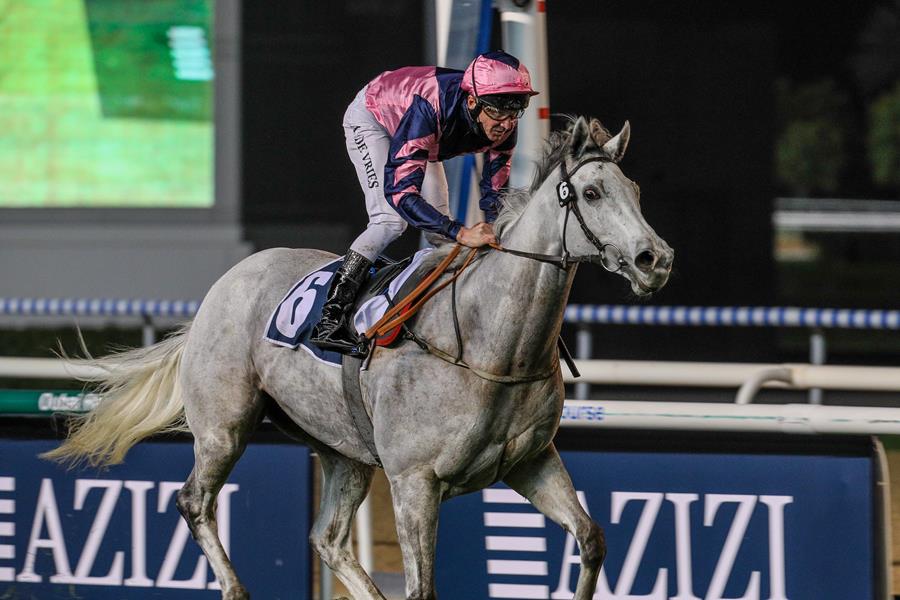 A second turf feature, the 1400m Group 2 Al Fahidi Fort sponsored by Creek Views By Azizi, proved a memorable race for more than one reason with Land Of Legends bringing up 400 UAE winners for Godolphin and supplying Frankie Dettori his first local winner since landing the Group 3 Dubai Gold Cup in March 2012. He has been an infrequent visitor since and performed his trademark flying dismount, albeit to a somewhat reduced audience.

Saddled by Saeed bin Suroor, Dettori’s mount led home a 1-2-3-4 for the Godolphin trainers, in doing so registering a fourth career success and a deserved first local having finished second in the first two of his three carnival outings last season, both in 1600m turf handicaps. A homebred 5-year-old Iffraaj gelding, he was seemingly outpaced on Super Saturday in the 1200m Group Nad Al Sheba Turf Sprint and this, 320 days later, was his first start since.

Bin Suroor said: “Isn’t great to see Frankie back, winning races and riding as well as ever. We have been friends for about 27 years.

“This horse has been working very well and showing lots of speed at home, so we were hoping for a big run but he will improve for that because he had been off since March.”

Dettori added: “I had a perfect trip; I sat behind the leaders and found the split at the right time. Actually I was probably going too good and getting there too soon. When we hit the furlong marker I asked him to quicken and bless me, he gave me all he had. It was a good effort, but everything fell right; we had a good draw and found a nice rhythm but these races are very competitive. If you ran it ten times you’d get ten different results.

“Honestly, I’m delighted. We had high hopes all night and we managed to get one in our last race together today so I’m pleased for Saeed and the team.” 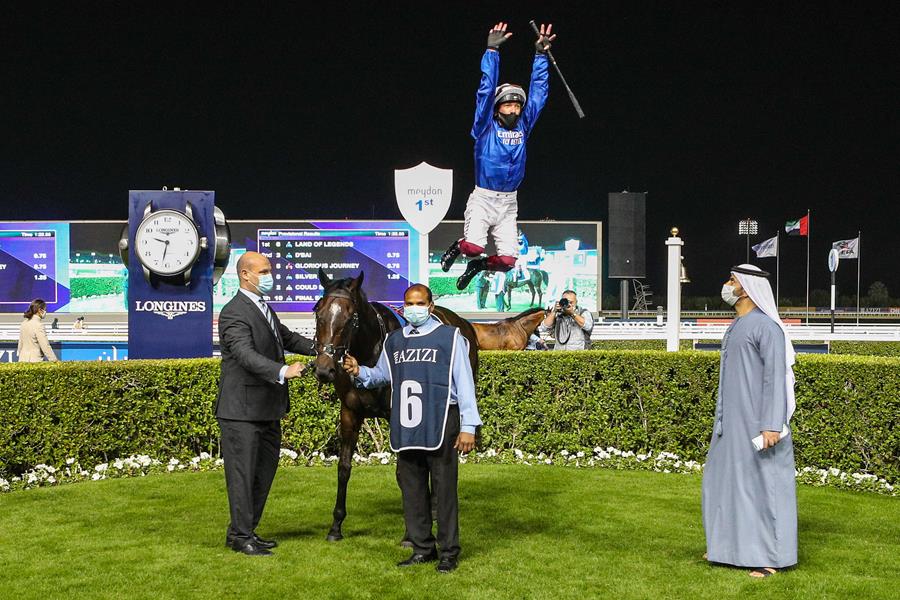 Another on dirt, the 1200m Group 3 Dubawi Stakes sponsored by Park Avenue By Azizi, is clearly a race Satish Seemar likes and he saddled five of the nine runners this year, landing the spoils with Switzerland, the mount of Tadhg O’Shea. The master of Zabeel Stables has now won the race three years consecutively and seven times since 2013. Drawn wide and forced to race accordingly, O’Shea settled his mount in midfield before closing as the main protagonists turned for home to get involved in a four horse war.

Stable companion Gladiator King briefly led, from early leader Waady with Good Effort living up to his name in between them. O’Shea drove Switzerland to lead about 275m out, but Waady fought back, eventually finishing second ahead of last year’s winner Gladiator King.

Gelded since his previous appearance in March, the RRR Racing Speightstown 7-year-old was opening his UAE account at the seventh attempt, third for Seemar, and adding to five victories in his native US.

O’Shea said: “I worked this horse here at Meydan the other day and he was brilliant and really pleased us all. There is no doubt he had somewhat lost his way, but now he has won again, hopefully he can get back to his very best.”

Rest of the Card

A 2410m Listed turf handicap, the Dubai Racing Club Classic sponsored by Aliyah By Azizi looked competitive on paper, but nobody told William Buick and Walton Street who made every post a winning one, breaking the track record for good measure. Seemingly always happy bowling along in front, Buick set sail for same leaving the home turn and, within 100m, their race was won.

A 7-year-old gelded Cape Cross gelding, saddled by Charlie Appleby for Godolphin, won a course and distance handicap in February 2018 and was winning for the first time since when landing his final start of 2020 in Newmarket’s 2400m Listed Godolphin Stakes at the end of September.

Appleby said: “We are delighted with that and he looked absolutely fantastic before the race which basically reflects the work he has been producing at home.

“He is not out fastest, classiest, horse by a long way, but he has guts and loves it here at Meydan so we might freshen him up for Super Saturday and have a crack at the City Of Gold.”

The 2021 carnival curtain raiser was on dirt, the Al Furjan By Azizi, a 1400m handicap and Doug Watson, having his first runners of 2021 although not present to saddle them himself, wasted little time opening his account for the year with the ultra-impressive victory of Golden Goal.

Ridden supremely confidently by Pat Dobbs, the 7-year-old gelded son of Dark Angel was settled in fifth of the nine runners, never far off what appeared a frenetic early gallop set by Important Mission. Desert Doctor led briefly, sweeping past eventual third Important Mission but Dobbs stalked that move and, once he pressed the accelerator, Golden Goal surged to the front with the race immediately in safekeeping.

It was the horse’s fifth career win and second in the UAE, from five starts, since being purchased by Dale Brennan, and a track record to boot!
Brennan said: “We were very excited by him last season when we thought he had a Godolphin Mile chance but, about this time of year, he had a setback and missed the rest of the season.

The finale, a second turf Listed handicap, was the 1000m Dubai Dash sponsored by Aura By Azizi, just as it was 12 months ago was won by Equilateral for Charlie Hills. Last year he was ridden by James Doyle for Prince Khalid Abdulla, this time Dettori was in the saddle for Jim & Fitri Hay.