It was 29 years ago that Frankie Dettori first tasted Group 1 glory. The scene of his celebrations was Ascot, the place where so many marvellous things have subsequently happened to the man who became racing's biggest star. 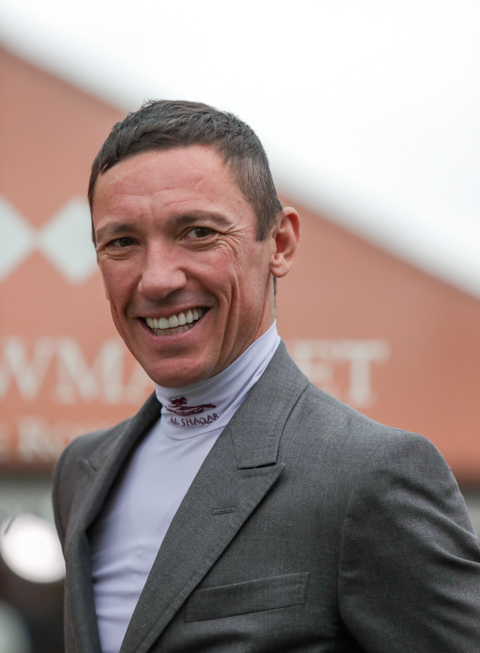 He returns to his favourite racecourse with chances aplenty, but on Qipco British Champions Day he may have to share the limelight with another man. That man is the new British champion.

Oisin Murphy was not born when Dettori broke his top-flight duck aboard Markofdistinction in the 1990 Queen Elizabeth II Stakes. Nor had he been born when Dettori was crowned champion jockey for the first time in 1994, also the year of his first flying dismount. He was definitely born when in 1996 Dettori made history at Ascot with his Magnificent Seven but, having only just passed birthday number one, he was not doing much.

At 24, Murphy is half Dettori's age, yet like his older rival he has done plenty this season. On the autumnal afternoon when that season ends, both will seek to go out with a bang.

This is a Champions Day like none that has gone before. On the straight track, home to three of the card's contests, the ground was on Friday heavier than clerk of the course Chris Stickels has ever known. On the round track it has been so heavy, and indeed so waterlogged, that the remaining three races will take place on what has been christened "the inner Flat course", but which we know best as the hurdles track. While that means the Champion Stakes is shifted to the hurdles track, jumps fans can no doubt look forward to this year's Long Walk Hurdle being held on the inner Flat course.

Fret not, however, for you will see no hurdles on Saturday, just lots of new plastic railing, an expertly reconfigured home bend and some of the best racing staged anywhere in the world. Predictably, therefore, in this the most spectacular year of his sensational career, Dettori could be the one to dominate.

In an annus mirabilis he has won 17 Group 1 prizes, beating his previous personal best. History may have eluded his sweetheart Enable at Longchamp but, to widespread delight, she will return in 2020. So, too, will the sport's supreme stayer Stradivarius. First, he has a job to do in the Qipco British Champions Long Distance Cup.

Now the winner of his last ten races, Stradivarius has a rich Ascot record, having won two Gold Cups, a Long Distance Cup and the Queen's Vase. One certainty this Saturday afternoon is mud. The other – assuming John Gosden is happy after walking the course – is that Stradivarius will be sent off at odds-on.

Stable companion Star Catcher will surely not be odds-on but the Ribblesdale, Irish Oaks and Prix Vermeille heroine will likely start favourite in the Fillies & Mares, in which Dettori has selected her for a second time over another of his dual Group 1-winning partners, Anapurna. He did not face a choice in the opening Qipco British Champions Sprint but will be happy to ride Advertise – who has also provided him with a pair of strikes at the loftiest level – and Cambridgeshire victor Lord North in the Balmoral Handicap. Both have been ante-post favourites all week.

Murphy rides in those four features – his Long Distance Cup mount Max Dynamite made his racecourse debut before Murphy – but it is the other two races, the programme's true crown jewel highlights, that he will be anticipating most.

Twelve months ago Murphy was victorious in the QEII on Roaring Lion, the greatest horse he has ridden who, so desperately sadly, this summer became the greatest horse he has lost. On this occasion Murphy can take confidence from knowing he will be legged up on the fixture's highest-rated runner. This time last year Benbatl was preparing to take on Winx in the Cox Plate. Winx proved too much for him. Saeed bin Suroor hopes Ascot's heavy ground does not prove similarly insurmountable.

Benbatl has been a good friend to Murphy. So has Japan and so has the nation's smashing mare Deirdre, the Nassau Stakes winner who ends her European trip against the likes of Magical, Addeybb and the Dettori-ridden Coronet in Britain's richest race, the £1,358,750 Qipco Champion Stakes.

Yet even if Murphy draws a blank he is set for a huge day, for this is the day he becomes champion jockey – and an extremely worthy one, too. Murphy is not simply brilliant in the saddle, he is a wonderful ambassador for the sport. Earlier in the year he saluted another when sending Dettori a congratulatory message following his winning ride in the Irish Oaks. When interviewed by the Racing Post last month he was understandably proud to reveal what he received back.

"Kid, riding horses is all about feeling," texted Dettori in his reply. "If you want to be the best use your instincts. This is advice for free. I hope you'll understand. You have a natural talent, so use it."

Advertise, Hello Youmzain and One Master have all won Group 1s this season. Make A Challenge has not but he will be many people's choice as he seeks to continue a remarkable campaign in which his official rating has soared from 66 to 111.

It's all about you know who, the exceptional marathon man Stradivarius, undefeated in his last ten outings and bidding to complete back-to-back wins against a field that includes last season's St Leger hero Kew Gardens and Withhold.

John Gosden has been blessed with an incredibly strong hand of middle-distance fillies and mares in 2019 and three of them run hero. Star Catcher and Anapurna are both Classic winners but five Irish raiders – made up of the Dermot Weld-trained Tarnawa and a Ballydoyle quartet – make it a strong heat.

At the start of the month The Revenant was hardly a household name but he heads the betting for Europe's unofficial mile championship thanks to his Arc weekend romp on deep ground. Benbatl is the best horse in a big field that also houses 2,000 Guineas winner Magna Grecia, absent for 147 days.

Magical does not win when Enable is in the field but when Enable is not in the field Magical often does win. The Arc fifth is clear favourite to claim an interesting but substandard renewal that has attracted Japan's Deirdre, the soon-to-retire Coronet and Addeybb, who would have been happier on the normal round course, even in its waterlogged state.

If by this stage Frankie Dettori has had a good day bookmakers will be shortening Lord North, on whose back Mr Ascot was at his cheekiest in the Cambridgeshire. Bookmakers have already been done one favour by Biometric, who denied Dettori a five-timer on the Thursday of the royal meeting.

Racing fans will see something new on Saturday when the three longest races on Qipco British Champions Day are run on Ascot's hurdles track, which was called into action on Wednesday when it was decided the normal Flat course was likely to be unraceable.

Having only received watering to encourage grass growth, the "inner Flat track" is good to soft, soft in places, much quicker than the straight course, described as heavy and "and as soft as I've known it" by clerk of the course Chris Stickels on Friday.

Looking at the weather forecast, Stickels said: "The indications are it will be generally bright with sunny intervals. We may even get a dry day."