Last season's Investec Derby hero Masar continues to please trainer Charlie Appleby and has been pencilled into the trainers' strong squad of older horses for Royal Ascot next month. 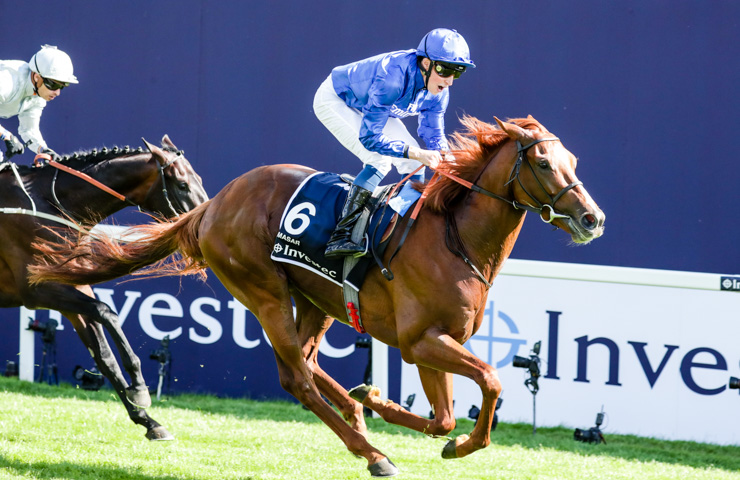 While Appleby admitted it is a case of "day by day" with the son of New Approach, who suffered a leg injury days before last season's Coral-Eclipse, the four-year-old's continued progress is enabling Godolphin to potentially shuffle the pack, with Ghaiyyath moving up to a mile and a half in the Hardwicke should Masar make the Wednesday feature over a mile and a quarter.

Masar is a best-priced 8-1 for a Prince of Wales's Stakes, which could also mark the start of the season for Enable and Sea Of Class.

Speaking at Longchamp on Thursday night, Appleby said: "I'd probably like to go up to a mile and a half with Ghaiyyath in the Hardwicke because, dare I say it, Masar is coming along nicely. It is one day at a time with him but it could be him in the Prince of Wales's.

"If I'm fortunate enough to get him there in time then that is more likely his route, allowing Ghaiyyath to go a merry gallop in the Hardwicke."

Appleby pinpointed Ascot tentatively back in March when Masar began his road back on a treadmill in Dubai but admitted at the time that everything needed to go right for that schedule to be maintained.

The trainer was speaking after Barney Roy confirmed his wellbeing ahead of the Queen Anne Stakes with a cosy success in a tactical renewal of the Listed Prix de Montretout on Thursday.

"I think the Queen Anne is tailor-made for him," said Appleby. "We got him at the start of the season and, given what we saw of him at home and watching his race videos, plus James has ridden him plenty at three, I asked James if he thought a mile or ten furlongs would be his best trip.

"We think a strongly run mile is his best trip, although he is obviously competitive at ten as well. I think going into Ascot on what we have seen so far, he’s going to be a major player."

Appleby also confirmed that Wild Illusion will make her seasonal reappearance in the Prix d'Ispahan back at Longchamp this Sunday, while options remain open as to the Classic destination of Line Of Duty.

"Line Of Duty will be kept in [the Prix du Jockey Club] and we've left him in the Derby as well," said Appleby. "We'll just see what the weather conditions do because we feel he’s a horse that appreciates a slight ease in the ground."

One horse who won't be taking in any big targets at this stage of the season is runaway Lincoln winner Auxerre. The rising star has suffered a setback and should return to the track in either July or August.