Irish-bred import Degraves (IRE) has scored at his Australian debut for Lloyd and Nick Williams at Flemington, but had to survive a protest before being confirmed as the winner.

Degraves won $125,000, The David Bourke (1620m) from Think ‘N’ Fly, but Damien Oliver lodged a protest against the winner for interference at the 100m mark. Stewards deliberated for around five minutes before dismissing the objection.

Under the guidance of apprentice Will Price, the well-supported Degraves ($3.90) scored by a long neck from Think ‘N’ Fly ($5), with the $2.20 favourite Kurabui 2-¾ lengths away third.

Degraves started his career racing in the Melbourne Cup winning colours of Lloyd and Nick Williams under the care of Joseph O’Brien in Ireland before making his way to Australia late last year and joining the stable of Robert Hickmott.

The son of Camelot had shown potential overseas, finishing fourth in Group 3 company behind Armory — runner-up in last year’s Cox Plate behind Sir Dragonet, and the minor placegetter in the Group 1 Prince Of Wales’s Stakes at Royal Ascot earlier this week.

Price was taken with the turn of foot Degraves showed when he asked the gelding to quicken.

“He hit the front and he’s still learning what it is all about, which is quite scary considering how his turn-of-foot was quite electric at the 300-metre mark,” Price said.

“For him to be doing that much wrong and still winning like that was pretty impressive.

“We were planning on being in the first couple, but I soon found the back of the favourite and I was always happy to track behind it.

“I felt like I was going too good and had to peel off its back … once we hit the front, he was still a bit ‘everywhere’ but he’ll get that improvement with racing.” 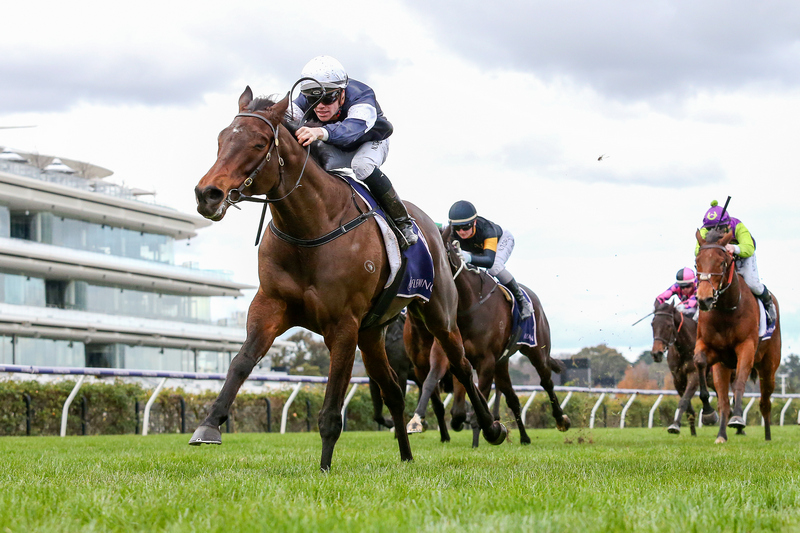 Degraves (IRE) and apprentice Will Price weave a passage to the line, picture Racing Photos