Currie: Sunlight is up for the fight

Luke Currie can see no reason why triple Group 1 winner Sunlight will not repeat her extraordinary pattern of producing her best form at her second run from a spell when she tackles Saturday's crucial The Shorts at Randwick.

Sunlight pushed her first-up record to one win from five starts when unplaced fresh in the Concorde Stakes earlier this month, but the mare is unbeaten second-up, most famously winning Victoria's premier sprint the Newmarket Handicap in the autumn after a first-up third in the Black Caviar Lightning.

Currie said on Tuesday morning that all indications were that Sunlight was set to repeat history and fly second-up in what will be the final lead-in run for many of the contenders for next month's $14 million The Everest.

"If you go through her form she should be well improved second-up and I think she'll run really well this Saturday," Currie said.

"She'd done everything right before her first-up run but the track was lightning fast and we drew out and she had to go back - she was only going to be wide.

"She still run home quite well - she broke 33 (seconds for last 600 metres) home so I didn't think it was too bad a run although the horses around her made it look that way." 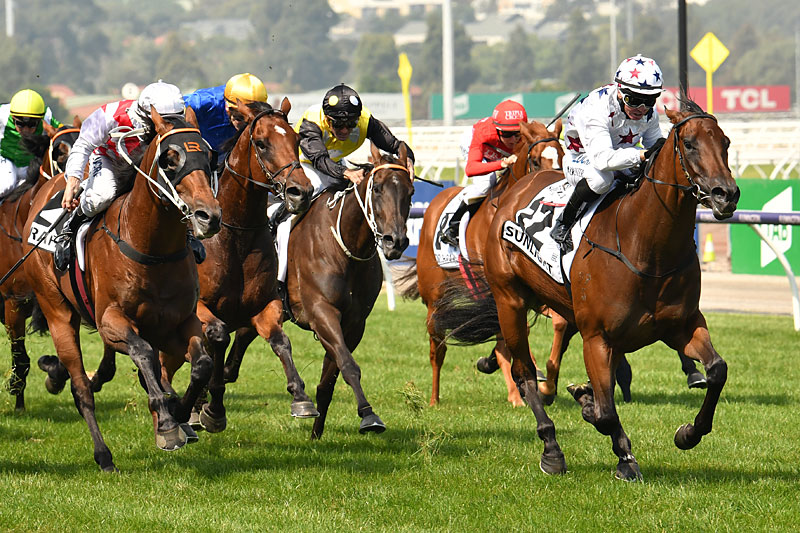 Despite her outstanding three-year-old form and her second-up record, Sunlight is a drifting $13 chance with BetEasy in the race on Saturday.

Currie conceded Saturday's G2 The Shorts over 1100m will hold a deal of pressure for all connections given what is at stake in a month's time.

"Everyone's eyes are on them so it is important for them to run well so I'll be expecting and hoping she'll run well and there's no reason why she won't," he added.

Currie also has claims of a Group 1 win on Saturday as he rides ATC Derby winner Angel Of Truth in the Colgate Optic White (George Main Stakes) at Randwick.

Angel Of Truth, who is trained by Gwenda Markwell at Kembla Grange, ran sixth first-up in the Chelmsford Stakes at Currie's first ride on the horse and the performance left an impression on the rider.

"He gave me the feel of a really nice horse," Currie said.

"He wasn't really screwed down for his first-up run. He sat on speed and got a bit tired late. It was only in the last 150 yards otherwise he was going to run second. I imagine he'll improve off the back of his second run too, but if you look at his first run, he'll run really well this weekend.

"He has shown in previous preps that he's got the speed - he's won over a mile and even seven furlongs early in his prep."

There is a lot at stake in Saturday's race as if Angel Of Truth runs well, he will continue on his path to the Caulfield and Melbourne Cups and that prospect is exciting for Currie.

"They (Cups horses) are hard to find especially the Australian ones at the moment with all the internationals coming over, so it's quite important (he runs well)," Currie said.