Ka Ying Star maintained Tony Cruz’s advance towards the top of the trainers’ premiership with an overdue success in the G3 Lion Rock Trophy Handicap (1600m) at Sha Tin on Sunday. 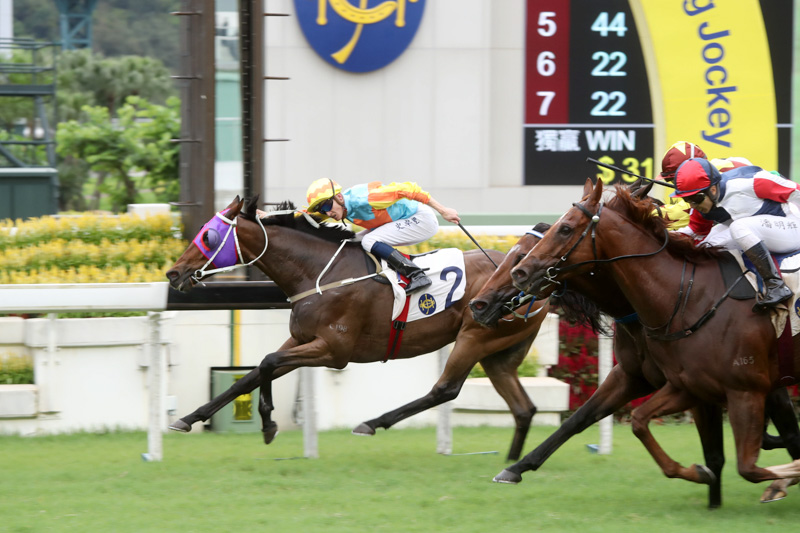 “I’m going to put the pedal to the metal!” Cruz said after the Cityscape gelding had pushed the stable’s tally to 52 wins.

That puts the two-time champion trainer five shy of long-time leader Ricky Yiu, who has clocked only one win from the last seven meetings.

Ka Ying Star (129lb) had classy form in the book already this term, including a couple of G1 placings, but had not nailed a Pattern race and was without a win of any kind in 13 months.

“The horse has deserved this, he’s run some good races in Group 1 but he has hardly any wins on his record so this is a good way for him to end his season,” Cruz said.

“Everything went his way today; he had to dictate this race and if he did, I knew he’d be hard to run down. Chad rode the perfect race and he clocked 1 (minute) 32.95 (seconds), that’s a decent time so he’s shown his quality.”

The Cityscape five-year-old secured the leader’s spot under Chad Schofield, who slowed the tempo in the back straight before kicking on down the final stretch. The game bay responded to every urging, holding off the driving challenges of Southern Legend (133lb) and Fast Most Furious (113lb).

“Once I got the lead and got the fence I was able to give my horse a breather,” Schofield said. “Time To Celebrate had made us work a bit through a pretty solid first section and he wanted to put pressure on me again around the turn. If anything, that spurred my horse along and switched him on because usually he's very relaxed out in front. Credit to him with the big weight, he was strong to the line.”

Schofield was delighted to have ended a personal Group race drought going back to his success on Rattan in the G2 Sprint Cup in April of last year. Ka Ying Star’s score also took the rider to 38 wins, matching his personal best for a Hong Kong season.

The rider reached a new peak of 39 wins when driving Mr Croissant to success in the finale, the Class 2 Amah Rock Handicap (1200m).

“I hope the (Group races) keep coming,” Schofield said. “I haven't had many big winners bar today but numbers-wise we've equalled my best, so hopefully we can keep kicking strong for next season.

“I only started riding for Tony (Cruz) this season and to ride a Group 3 winner for him is very good.”

Cruz will give Ka Ying Star a well-earned rest before pointing towards the LONGINES Hong Kong International Races in December.

“We’ll try again next season,” the handler said. “There’s nothing else for him this season so we’ll have to go with what the programme gives us, so he'll definitely be aimed at the Hong Kong Mile.”