Billy Egan on Nettoyer: “She worked to the line nicely. She went alright for her in that grade.”

James McDonald on Kolding: “He doesn’t go this way around. Simple.”

Willie Pike on Arcadia Queen: “It was a sound effort.”

Jamie Kah on Buckhurst: “He was disappointing. He was very dour today.”

Michael Rodd on Master Of Wine: “He ran his race a bit upside down. He was very keen early wanting to charge up behind them. He had no right to finish where he did and they sprinted and left him and then he came home late. He’s still a work in progress, the horse.”

Luke Currie on Fierce Impact: “Went back from the draw. He got a good run through them but he was on empty late.”

Kerrin McEvoy on Probabeel: “The ground went against her. She tried very hard but she found it tough over that last furlong in the ground.”

Craig Williams on Humidor: “He followed the winner up through the race but he dipped and dived from the 1200 (metre mark) onwards, even though he was in the same ground as the winner, he just didn’t enjoy it today.”

Damian Lane on Aspetar: “Didn’t handle the track or the condition or the circuit.”

Damien Oliver on Russian Camelot: “Great effort. He ran really good. Got into a nice position. Was probably a little close to a strong speed from the barrier but we did as well as we could. He was super brave even when the first two came to him. He fought it out really well.”

Jye McNeil on Grandslam: “Not to be today.”

John Allen on Mugatoo: “He’s gone super. Tried to get a bit of cover early so he’d done it the tough way. Didn’t get around the home bend great but he battled on good.”

Ben Melham on Armory: “He was good. He just struggled in the ground and I had to keep him wide on the fresh ground. Just got beaten by a better one on the day. He had his chance.” 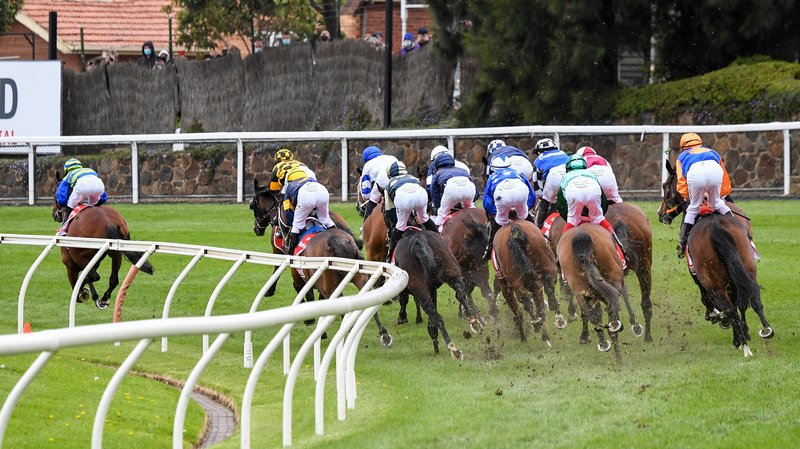 The first lap of the Cox Plate, picture Racing Photos