It was meant to be a warm-up run towards the Kranji Mile, but Countofmontecristo showed he was already in red-hot form after he downed some of the best sprinters at Kranji with a sizzling win in the highlight of the comeback meeting on Saturday.

It has been well-documented that the six furlongs of the $100,000 Class 1 race was considered a touch sharp for the multiple-Group winner now that he has matured into a miler, even by his trainer Michael Clements, but the Echoes Of Heaven six-year-old does not read the papers.

With the top pick Fame Star (Marc Lerner) caught in a speed battle with Nowyousee (Krisna Thangamani) at the head of affairs, and the well-backed Skywalk (Vlad Duric) and Star Of Jupiter (Shafrizal Saleh) clapping onto the blistering pace right behind, they did not loaf around in the first half-mile. 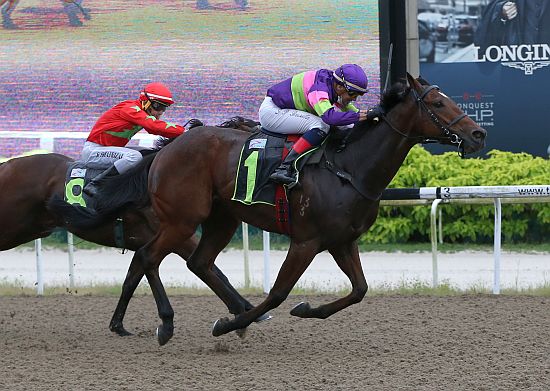 For most of the backstraight, Louis-Philippe Beuzelin was seen niggling Countofmontecristo ($22) along to keep up with those record-breaking sectionals in fifth place, but it wasn’t long before those fliers hoisted the white flag.

Fame Star tried to raise another gallop but after his energy-sapping run outside Nowyousee, by the 300m, he shortened up along with his companion in misfortune.

Star Of Jupiter and Skywalk were the next cabs off the rank, but sneaking up right behind them, Countofmontecristo had reached full throttle, finishing over the top of them to defeat a gallant Star Of Jupiter by one length.

Clements could not be happier with the run from a Kranji Mile perspective, with the marquee Group 1 race due on August 16, while Safeer’s smack-up fourth place was also a source of satisfaction.

“Count has always been a genuine horse. He always gives his best,” said the Zimbabwean-born handler.

“What he did today was quite remarkable. We had prepared him to carry a heavy weight, and it was a big effort to win with 59kgs while giving away weight to the others.

“Louis put him in a nice place and he quickened nicely in the straight. He didn’t have to necessarily win today, but he did it in style, and that can only put him in good stead for the Kranji Mile.

“I was also happy with Safeer’s fourth as he was drawn out wide, but he was well-weighted. The trip does not suit him and things did not go his way, but it was a promising run, also towards the Kranji Mile.”

With that latest success, Countofmontecristo has enhanced his already stellar record to 10 wins and 10 placings from 30 starts for close to $2 million in prizemoney for his owner Joe Singh.

Beuzelin said Countofmontecristo won on class, but it was also hard work for him in the early stages.

“He has the quality to win such a race. The fast pace helped him, but not me in the first part of the race,” said the French jockey.

“I had to scrub him up to keep in touch, I was flat out, and at the end of the backstraight I was worried because I know Fame Star is a 1200m horse with a hot pace, and he was 10 lengths clear.

“I was not making much headway, but when we reached the home turn, they began to knock up. He was too good in the end.”

“I was mindful not to hit the front too soon as he’s the sort of horse who stops once he’s in front. I waited for the last 100m and he won a nice race.

With the treble, Beuzelin leapfrogs to the third place on 17 winners, but is above all happy he is not staying at home anymore.

“In the first month, I gained four kilos and was around 58kgs, but in the second month, I ran 10km twice a day and started to diet,” said the Barbados-trained hoop.

“I’m lucky I had my first four races early and had a break in between. That gave me a breather, and I felt fitter and stronger as the day wore on, and I was able to finish strongly with three winners.”