Coming Through gunning for third win in Class 3

Progressive galloper Coming Through has reached the top end of Class 3, but trainer Desmond Koh feels there is still plenty of depth in his race on Saturday.

After going back-to-back in such company at his last two starts (both 1200m Polytrack), the four-year-old now stands at 79 points, courtesy of his smart record of five wins and one third in only eight starts for the Tan Huat Stable.

One more hurrah will see the son of El Hermano compete in Class 2 next, but Koh would like to see his charge pass that test in the $70,000 Class 3 race over 1100m first.

On ability, the Singaporean handler expects Coming Through to be in the mix, but while the fitness level following the Circuit Breaker lockdown is a query, he is more wary of the opposition. 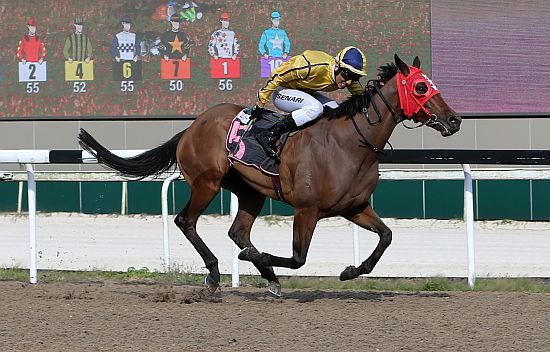 “Obviously, he’s not as tight as he was, but he’s had one barrier trial, although he could use another trial as a tightener.

“But I’d rather not in the end. I thought I’d just let him come into it naturally instead of keeping putting pressure on him.”

Koh could have elected for an apprentice jockey to shave some kilos off the hefty impost of 59kgs, but decided not to change a winning team instead.

Noh Senari, who still claims one kilo as a senior jockey, will attempt to keep their unblemished record of three-from-three going at a fourth pairing.

“When you are at the top of your class, you will carry weight. We knew he’d get a heavy handicap, but I would rather stick with Noh, even if he claims only one kilo,” said Koh, who is currently the leading local trainer in ninth spot on nine wins, two of them provided by Coming Through.

“He knows the horse very well, and they are so compatible together. He likes this horse and he works him all the time, even during the break, he walked and trotted him.

“That’s why I will always try to put Noh on him whenever he can ride at the weight.”

Barrier three is a handy draw, but Koh said Coming Through is an adaptable sort.

“He’s a versatile horse. He can go with the pace or take a sit,” he said.

Coming Through will not be the only runner Koh will saddle in that race. Enter newcomer Legend Of The Sun, who as his name suggests, is raced by one of his main supporters, the Sun Bloodstock Racing Stable.

Typical of a big chunk of their Singapore horses, Sun previously raced the Not A Single Doubt four-year-old in Australia – then known as Legend Of Condor - where he was a two-time winner for Gerald Ryan at Randwick and Flemington, both over 1000m.

“The horse was ready to race before the lockdown. We had to go back to square one with him,” said Koh, who has booked jockey John Sundradas for the ride on his debutant

“He has come along well and will get a chance to show us what he can do. He’s shown some pretty positive things on the training tracks.

“On his Australian form, he was more of a stalker behind the leader, but we’ll get a better gauge of him on Saturday.”

Koh will have seven confirmed starters and three standby starters across the 14 races on offer at that first Kranji meeting – held in camera - since the closure brought about by COVID-19 on April 7.