The re-scheduled $140,000, Listed, McMahon’s Dairy McKenzie Stakes (1200m) at Moonee Valley in Melbourne was responsible for the best feel-good story of Saturday afternoon racing nationwide when Harry Coffey scored aboard the lightly-raced 3-year-old gelding Ocean Beyond (NZ) (by Ocean Park).

A seven horse affair dominated by the on-pace duo Deep Speed (by Deep Field) and the aforementioned Ocean Beyond, it was the latter which managed to do best over the closing stages, the pair of speedsters racing clear of their handful of rivals after dictating terms through the early and middle stages of the contest.

The winner of a Geelong maiden at his only previous outing, Ocean Beyond maintained his unbeaten record thanks to a Harry Coffey ride which would not have only pleased the gelding’s connections, but brought a great deal of satisfaction to the Australian thoroughbred fraternity as a whole.

Despite consistently proving be a hugely competent jockey, Coffey is also very well known in the racing game through his well-known battle with cystic fibrosis.

Coffey’s day-to-day attendance to his life threatening illness has witnessed the young jockey gain the admiration of an entire industry universally amazed at his ability to maintain race riding fitness in one of sports most demanding professions.

Covid-19 has only complicated matters for the tremendously popular hoop, but the re-scheduled McKenzie Stakes — postponed from its regular slot at the beginning of the spring — saw Coffey back in the headlines for all of the right reasons. 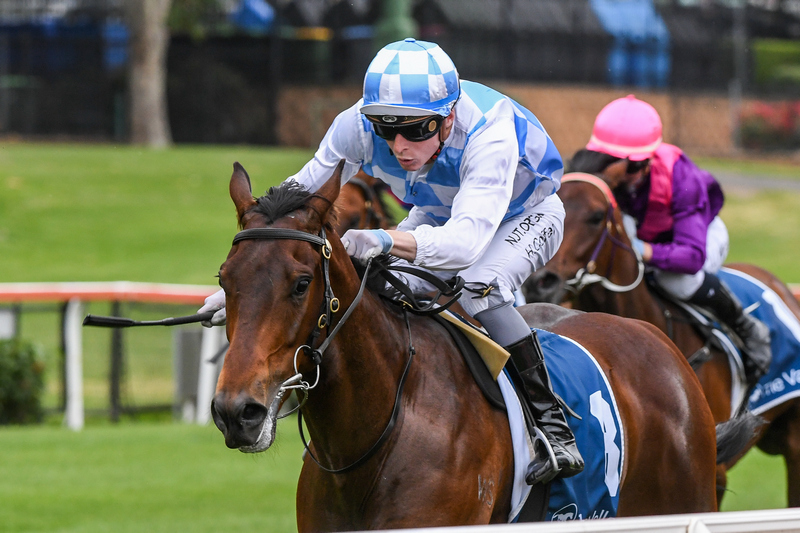 Speaking after his black-type victory at virtually his first opportunity to ride in the Melbourne metropolitan area for months, Coffey made it profoundly clear how much the victory for his close friend and trainer Daniel Bowman meant.

“That was really pleasing,” confessed Coffey after the win.

“He did everything today. He bounced, he rolled across, he relaxed nicely and quickened at the end.

“How good he is? I probably don’t know. Daniel thinks he’s pretty good. He’s pretty happy with him.

“All they can do is do what we ask and he did that today. Pretty lucky to be on him.”

Coffey continued telling the story of his association with Bowman and the progressive 3-year-old.

“When he rang me to trial that horse I asked if I had to ‘drive all the way to Warrnambool to trial it’, and he said that he ‘thought it was worth my while’.

“Daniel and I have been associated with some good horses back in the day. Hopefully this one can take us back to those heights.”

Coffey also alluded to the complications of managing his condition during the Coronavirus pandemic.

“I wasn’t doing a lot of riding in town pre-Covid, but I was getting a stack of winners in the bush and had a lot of momentum.

“With all the uncertainty around, I just chose to stay away. Not only was it the best thing for my health, it was probably a good thing for life. I just had a bit of time on the farm. I’ve ridden constantly since I was 15 in a hectic industry.

“To have three months at home with the family, and now a fiance, it was pretty good. I’m back bigger and better than ever and I’m a happy man.”

In reference to Ocean Beyond, winning trainer Daniel Bowman claimed: “Since we gave him his first gallop, we’ve known that he goes good. It was [just] a matter of looking after him until his head was right.”

Bowman also confirmed that “We’ll tip him out. He’s still very feminine and fine; he’s got a bit of filling out to do.”

Ocean Beyond scored by half-a-length, with another three lengths separating Deep Speed in second and Free To Move (by Unencumbered) in third.

Nicolini Vito started the $2.50 favourite but failed to get into the race at any stage after dropping out last on what was starting to look a decidedly leader-bias track.