Desert Encounter, who trailed through much of Saturday’s 1 ½-mile Pattison Canadian International, found a seam in deep stretch under Andrea Atzeni and recorded his second straight score in the Grade 1, $800,000 turf race for 3-year-olds and upward.

“The plan was to jump slow and he probably jumped a stride slower than I would have liked,” said Atzeni, who was riding Desert Encounter for the first time since their success here last year. “But it’s a mile and a half, it’s a long way, it’s a small field. So we were never panicking. The plan was always to sit last and come through them. So I wasn’t too worried about it.

“He’s a good horse, he likes it here. He loves the ground. And, I think he’s actually a better horse than he was last year.”

Ziyad, the even-money French invader, set a measured pace of :26.31 for the quarter and :52.26 for the half ,while holding a one-length lead over Woodbine-based Pumpkin Rumble.

The order remained unchanged through three-quarters in 1:16.93, but the field had begun to tighten up as they reached the mile in 1:41.23 and both Desert Encounter and Alounak were beginning to zone in with a quarter of a mile to run.

“Coming into the straight, obviously, I had options,” said Atzeni. “I could have gone around them but I decided to go inside. I thought the French horse (Ziyad) was the one to beat and I tracked him up through the straight and picked him up very nicely. He was the best horse in the race.” 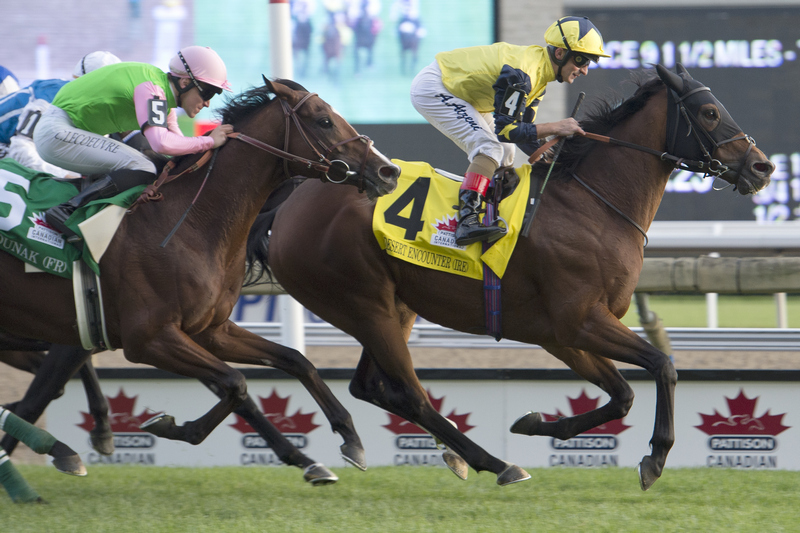 In high gear at the eighth pole, Desert Encounter was too hot to handle in the closing stages, winning by a half-length, as Alounak battled on gamely to hold second money by a neck as Ziyad gave way grudgingly to finish third.Pivoine, yet another neck in arrears, ran well to nail down fourth money with Pumpkin Rumble and Nessy completing the order of finish.

For Alounak, who is conditioned by Waldemar Hickst, the Canadian International represented a career-best effort.

“First of all, we are very happy,” said Holger Faust, racing manager for owner Darius Racing.

“We expected to come for good prize money and that worked out. “He didn’t break that good because we actually wanted to be more with the front. We wanted to be in the second position behind Ziyad because we knew Ziyad would try to make it post to post. That plan didn’t work out, so the jockey took ‘Plan B’ and we are happy with the result.

“Jamie Spencer (on for the past three starts, all wins), unfortunately, couldn’t ride him today, so I was lucky enough to get back on him,” said Atzeni. “He’s been winning in England, but dropping back to last. I spoke to David (Simcock) before the race, and he was very keen for me to get the horse to relax.”

The Irish-bred seven-year-old gelding follows Joshua Tree (2012-2013) and George Royal (1965-1966) as Canadian International repeaters.Philip Robinson, racing manager for owner Abdulla Al Mansoori, left the door open for Desert Encounter to return next year and attempt to join Joshua Tree, who also won the race in 2012,  as the only three-time International winners.

"It would be lovely," he said. "I dare say if he's still a happy horse like he is now, for sure, he'll be back. He enjoys it here, why not?

"The last three of four races he's just never stopped improving, he's still improving. You expect it maybe from a four- or five-year-old but I think mentally he's improving so much. He's enjoying his racing . . . he's just in a very happy place this moment."

In other news Starship Jubilee, under Luis Contreras, surged to the lead at the top of the stretch, and went on to take all the spoils in the 63rd running of the Grade 1 $603,200 E.P. Taylor Stakes for fillies and mares, Saturday at Woodbine.

It was mutuel favourite Red Tea who came away with the lead after a cavalry charge into the first turn of the 1 ¼-mile E.P. Taylor. Contreras and Starship Jubilee pressed to the outside, as the pacesetting duo took their eight rivals through an opening quarter-mile in :26.50.

Red Tea was a length to the good after a half-mile timed in :52.07, as a patient Contreras kept his charge well-positioned. Holy Helena, the 2017 Queen’s Plate champion was third, while British-bred Imperial Charm sat fourth.

After the three-quarters mark, with Red Tea still holding a one-length lead, Starship Jubilee was asked for her best run, and the six-year-old daughter of Indy Wind responded with a strong turn of foot that put her in charge by two lengths at Robert Geller’s stretch call.

German-bred Durance, efficiently ridden by Lucas Delozier, and always well placed, soon picked up the chase, as did fellow outsider Platane. But the pair was left to toil for runner-up honours as Starship Jubilee stayed strong in the final yards.

At the wire, Starship Jubilee, claimed for $16,000 on Attard’s behalf by his father and fellow trainer, Tino Attard, at Gulfstream in February of 2017, was a length in front of Durance, who was a head in front of Platane. Imperial Charm settled for fourth.

“It being a mile and a quarter is always tough, but it being a Grade 1 and being in our backyard, that kind of helps soften the blow,” said trainer Kevin Attard. “She was so convincing when she won her last start (the Grade 2 Canadian Stakes) and she came out of that race in great shape. She’s worked really well in the interim and Luis gave her an incredible ride today. I’ve been fortunate to make some good claims in my career but… she’s the pinnacle right now. This is my first Grade 1 win and I want to thank Adam and Bonnie of Blue Heaven Farm for buying her and allowing me to train her.”

It was sweet redemption for the Florida-bred Starship Jubilee, who finished fourth in last year’s E.P. Taylor.

“Last time (in the Canadian), she relaxed really nice going 1 1/8-miles and today, (Kevin) told me if they want to give you the lead, take the lead, but she didn’t need the lead to win this race,” offered Contreras. “This filly came out really well trained and she was amazing today. She always gives me something no matter what at the end and I just was so comfortable on the last turn. When I saw no one was coming close to us on the front end, I was just waiting for the stretch to make a run and she just exploded.”

The Blue Heaven Farm silk bearer came into the race off an outstanding victory in the aforementioned Grade 2 Canadian Stakes on September 14, an authoritative 4 ¼-length win in the 1 1/8-mile grass event.

A date in the Breeders’ Cup could become a reality.

“It might be on the table now,” said Attard.