After a change of scenery,  a vastly-improved The Shadow broke his maiden status in style in the $20,000 Open Maiden race over 1200m at Kranji on Saturday.

With a third place as his best effort to show for in six previous starts under trainer Donna Logan, the Dissident four-year-old was a different proposition altogether from the moment he was taken to the front by jockey Shafrizal Saleh from barrier one.

He quickly had company on the outside, but the strides looked comfortable and fluent. When favourite Ima (Simon Kok Wei Hoong) took the race up to him in the home straight, the threat never materialised. 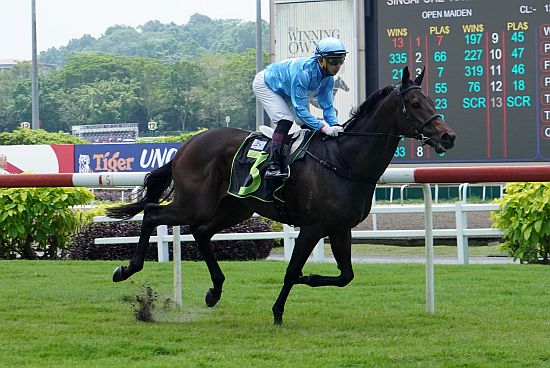 Sent out at $21, The Shadow hacked up by more than five lengths from Alexander (Mohd Zaki) with Ima again bowing out of the scene when called upon, settling for third another half-length away, his third placing in five starts.

“He arrived to us around two months ago, and like with any stable transfer, we took our time with him,” said Clements’ assistant-trainer Michael White.

“He had two trials (one win and one second), and if he runs as well as he trialled, honestly, we were confident he would run well.

“If he couldn’t win today, it is what it is. If he had won by one length, it would be okay, but from the way he won, without getting too carried away, he’s a horse that certainly has ability.

Shafrizal said he was expecting an improved performance, but certainly not the sheer contempt of the win.

“He ran good barrier trials. You could tell he was an improving horse,” said Clements’ former apprentice jockey.

“I was told to go forward from barrier one. I thought Ima would lead us but we were able to hold the fence.

“I just waited for the home straight to let him go. I had plenty in hand but he still surprised me with the way he pulled clear.”

That first breakthrough has doubled The Shadow’s stakes earnings to around $20,000 for the Falcon Racing No 7 Stable.

Clements went on to saddle a training double with the well-supported ($18) Day Approach (Louis-Philippe Beuzelin) in the following race, the $50,000 Class 4 Division 2 race over 1200m to stretch his lead to seven winners (23 versus 16 from Mark Walker) on the Singapore trainer’s premiership.