When the gavel came down and the auctioneer hollered over the microphone: “Sold to Michael Clements for A$210,000”, the Kranji trainer could let go a little fist pump, but not without that sinking feeling of walking away with a much lighter wallet.

Clements was happy and relieved because he had been eyeing this son of emerging stallion Headwater for both his looks and pedigree, but was also a bit on edge because he had just busted his budget by a long way.

Four fine specimens of Vinery Stud’s much-vaunted first-season sire by Exceed And Excel had already gone through the sale ring at the Inglis 2019 Ready 2 Race Sale in October 2019 - and had all sold like hot cakes. 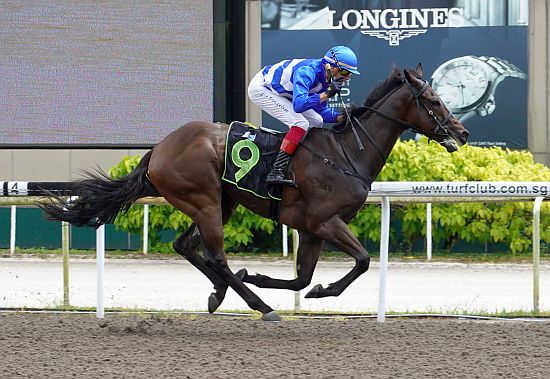 The only remaining Headwater left happened to be the last lot of the whole one-day sale (Lot No 190).

The crowd at the Riverside Stables Complex in Sydney had already thinned out, but the bidding action was still going on in earnest. Having unsuccessfully bid for the first four Headwaters, not to mention at previous sales elsewhere, Clements was very determined not to let this one get away.

But when his A$150,000 limit was passed, the Zimbabwean-born horseman had to think twice before upping the ante.

Still, he had been so taken by the gelding’s physique and breeze-ups that it wasn’t long before he threw caution to the wind.

“Personally, I tend to go more on the physical side than the pedigree when I choose a horse. This one was physically impressive, the way he moved in the breeze-ups was powerful and his action in the parade was also very good.

“But I’ve also been keen on this new stallion for a while. I’ve missed quite a few Headwaters at that sale and in past sales, and this one was the last one available and it was towards the end of the sale.”

After he picked up his new expensive toy at the check-out, Clements would invariably be prey to that nagging thought whether he had not broken the bank for a dud, but if there were any moments of self-doubt, they were well and truly answered a little over a year later.

Having already given a foretaste of his enormous potential in his morning work, Starlight (as the first Headwater progeny to race at Kranji was named by his owner, the PSM Racing Stable) duly thumped his rivals at his Kranji debut in a Restricted Maiden race over 1200m on Polytrack at the last 2020 meeting on December 27.

Now, we’ve often seen impressive debut winners fail spectacularly at their next start. Clements is aware of such flashes in the pan, but as measured as his assessments always tend to be, there’s a feeling he wouldn’t have to look too hard to find Top Knight’s successor as his next 3YO champion.

While Clements’ assistant-trainer Michael ‘Chopsy’ White has already stuck his neck out by calling Starlight the “best horse” he has had anything to do with since he has been in Singapore, Clements would still rather wait for Starlight’s next tougher test in this Saturday’s $75,000 Novice race over 1200m to gain a better idea if that twinkling star could turn into the next supernova.

“It was great to see him do so well first-up, especially after he showed a lot in his gallops and trials,” said the newly-crowned Singapore champion trainer.

“He won his trials so easily, but he also looked a bit vulnerable when they took him on. He didn’t know what to do, but Louis (Louis-Philippe Beuzelin) didn’t panic.

“The horse raced away from the field in the end. He won on raw ability, he will improve on his first-up run.

“He will be up against similar opposition tomorrow, horses who won their maidens and are stepping up in class, like Infinite Wisdom and Be You, but I expect him to match them for class.

“We bought him for the Singapore Three-Year-Old Challenge, but as you know, there are no feature races programmed for now. The Singapore Turf Club will let us know in due course.”