The Michael Clements yard came out firing on all cylinders at Kranji on Saturday with a four-timer courtesy of The Shadow, Day Approach, Big Hearted and Spirit Of Big Bang.

The prolific haul extends the Singapore champion trainer’s lead on Mark Walker to seven winners on the log. The Kiwi handler was able to pinch some ground back with a two-win buffer from Accumulation ($41) and Mystery Power ($25), a UK Group 2 winner who was at his Kranji debut in the last race, the $50,000 Class 4 Division 1 race over 1200m.

But all honours to Clements for having maintained a winning momentum which has snowballed into the present juggernaut thanks to a potent and evenly-spread squad. 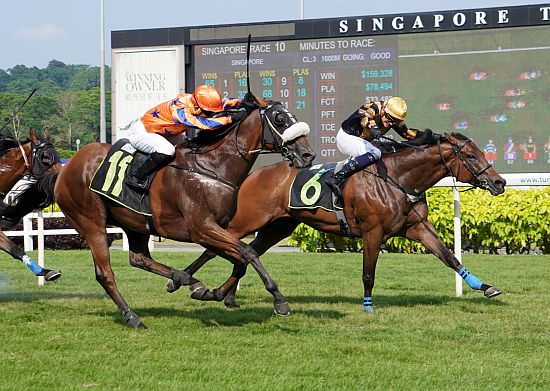 While the Zimbabwean-born handler had his assistant-trainer Michael White on hand for the first three wins, he was around for Spirit Of Big Bang’s run in the penultimate event, the $70,000 Class 3 race over 1600m on turf.

No doubt all four victories meant a lot to him, but he was particularly even more pleased with the last one given the Irish-bred six-year-old miler by Intikhab was nearly lost to racing.

“Spirit Of Big Bang got loose on the trotting track and had a head-on collision with another loose horse,” said Clements.

“He fractured a bone in the hoof, and the vet didn’t give a very good prognosis, but he has come back good.

“He was away for over a year. He had two good prep runs (both thirds in Class 3 races), and it was his race to win today.”

Clements admitted the race didn’t pan out as expected, but even if it didn’t look pretty, a win is a win.

Ridden by Louis-Philippe Beuzelin, Spirit Of Big Bang rolled forward to land in the leading position but was unable to clear Sky Rocket (Hakim Kamaruddin) on the fence.

Beuzelin decided not to budge, allowing Spirit Of Big Bang to travel as comfortably as possible before giving him a first taste of the persuader shortly after swinging for the judge.

A winner from off the speed at his previous three Kranji wins, Spirit Of Big Bang was treading into unfamiliar territory by spearheading the charge from the front for the entire journey.

The length of the straight must have felt endless. He was running on fumes inside the last 100m, but he hung on for dear life to fall in by a head from Augustus (Wong Chin Chuen).

Spirit Of Big Bang’s stablemate So Hi Class (A’Isisuhairi Kasim), who enjoyed a cosier rails-hugging run in transit but was hamstrung in traffic from the top of the straight, powered home strongly when he got a clear run inside the last furlong, but could only make it for third place another length away.

“We thought the only pacemaker would be Asaad, and Spirit Of Big Bang would then sit off him, but when Asaad missed the start, he found himself landing in front,” said Clements.

“He held on well. He fought on well to win a nice race.”

Sent out the $11 favourite, Spirit Of Big Bang clocked 1min 36.14secs for the 1600m on the Long Course for a fourth win over the same course and distance.

Having not finished out of the placings at his other five starts, Spirit Of Big Bang has seen his prizemoney shoot past the $130,000 mark for the Team Cheval & Goldenhill Stable.

The win also capped a great day at the office for Beuzelin. A riding treble (he also partnered Day Approach and Big Hearted) has vaulted him to the top of the Singapore jockeys’ ladder on 13 wins, unseating fellow Frenchman and previous leader Marc Lerner (12 wins) from his perch.

“I had to go for Plan X on Spirit Of Big Bang,” said Beuzelin after the original plans to follow Asaad went out the window from the start.

“He was extremely quick out of the gates. He was a bit keen as he had a lot of horses alongside him.

“I then decided to take him wider to give him more chance to relax, which he did. He got a nice breather.

“I had my own way in front, and then I decided to steal the race from them. He just kept going and held on well.”