With nine race meetings left in 2020, Michael Clements is imminently close to a first Singapore champion trainer title that has eluded him since he landed in Singapore in 1998, but the Zimbabwean-born handler would rather still keep the champagne on ice.

Long locked in a ding-dong tussle with reigning champion Mark Walker at the top of the tree this season, Clements has only recently drawn clear thanks to a more consistent haul of winners than his New Zealand rival.

This month alone, he has ratcheted things up with eight winners, including two trebles (last one at just-concluded Sunday meeting) to vault his score to 47, whereas Walker has seen his win-counter stall at 40 on September 26. 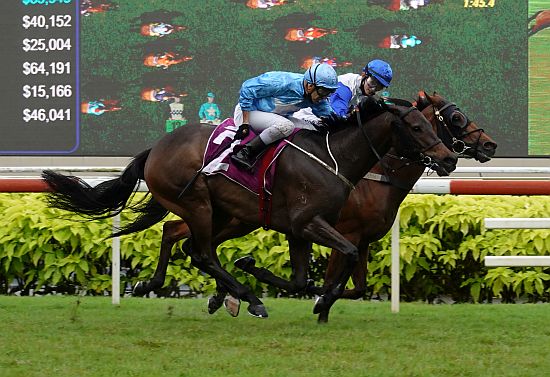 Top Knight will be returning over his Singapore Derby winning distance of 1800m on Saturday, picture Singapore Turf Club

Could the three-time Singapore champion trainer be getting the staggers close home or can he still resurge for a late rally that’ll go down to the wire?

Clements, who has two Zimbabwe champion trainer titles (in the last two Borrowdale seasons before he relocated to Kranji) on his CV, for one felt he was not home and hosed.

“That’s the closest we’ve ever been (to becoming champion), but a lot can still happen in nine weeks,” he said.

“We’ve had a good run of late. It’s good to have a strong team of horses and great staff behind us.

“I hope we can keep going as we have been going in the last couple of months.”

Clements would be hoping his stable star Top Knight is one who can reverse his latest performance, a too-bad-to-be-true ninth to Aramaayo in the Group 1 Raffles Cup (1600m) on October 10.

The Singapore Derby winner returns in this Saturday’s $400,000 Group 1 Queen Elizabeth Cup over the same Derby trip of 1800m.

Clements has already put a line through the Zoustar five-year-old’s Raffles Cup defeat, reasonably confident the gelding’s big finish can help him atone for a ninth win and third Group 1 success (he also claimed the 2019 Singapore Guineas in his champion three-year-old season).

“At his last race, there was no pace in the race. It didn’t suit him when they crawled, and sprinted up late,” he said.

“He can’t do that as he is not a sprinter. For him to finish off his race, he needs to run off a fair pace and he can then run into the race.

“This time (in the QEII Cup), he will be back on his winning course and distance (1800m), and it’ll be over the Long Course as well.

“The horse has maintained good form. We were really happy with him going into the Raffles Cup as we felt he was actually better in himself than he was going into the Derby.

“We’ve given him a few strong gallops. I feel he’s at the same level he was before the Raffles Cup, I’m really happy with him and Vlad (Duric) will be on him.

Top Knight will be Clements’ sole QEII Cup contender after he decided to opt out of the second Leg of the Singapore Triple Crown series with Siam Blue Vanda.

The Group 2 Stewards’ Cup winner (before the Circuit Breaker in March) has gone off the boil this campaign, with his last start a distant 10th to Aramaayo in the first Leg of the series, the Raffles Cup, but his trainer is not giving up completely on a berth in the ultimate Leg, the Group 1 Singapore Gold Cup (2000m) on November 21.

“Siam Blue Vanda hasn’t been running up to expectations. We decided to give him a short freshen-up after the Raffles Cup,” said Clements.

“He took it easy for a couple of weeks and is now back in work. There is still a possibility we’ll run him in the Gold Cup, but we’ll have to see how he responds in his prep.

“There’s not much point if he doesn’t show us he can again race up to what he is capable of doing.”

While Clements topscored last Sunday’s meeting with a hat-trick of wins courtesy of Day Approach, Miej and Imperium, the one that mattered, the Group 1 Lion City Cup (1200m), dodged him, but under the circumstances (Inferno is a few classes above and just unbeatable), he was happy with longshot Safeer’s closing fifth for Benny Woodworth.

“Safeer had no clear passage. He ran through horses and was strong at the finish,” he said.

“They ran close to 1min 8secs, it was his best timing ever done over 1200m. I was very pleased with that, considering he’s run at level weights with his rating (83).

“He’s in good shape, and has come through that run very well. I will run him in the EW Barker Trophy as he’ll be better suited at 1400m, and will come in nicely into a handicap race.”

Scheduled for November 15, the Group 2 EW Barker Trophy is a feature race that Clements has yet to claim.

Meanwhile, he will be banking on his team of 13 nominations at Saturday’s Group 1 meeting to keep his momentum flowing. One horse in particular that he is counting on to give a better account of himself is debut winner Sincerely, also raced by the same connections as Top Knight, the Falcon Racing Stable.

The French-bred four-year-old by Evasive never fired a shot second-up when trapped deep while rising in grade in a Class 2 race over 1200m on October 10.

Clements is lining him up alongside last-start winner and fellow Falcon ward Quarter Back in Saturday’s $85,000 Class 2 race over seven furlongs, anticipating the longer journey will suit the French Listed mile winner better.

“Sincerely has a lot of speed and won impressively on debut, but you can forget he ran at his last start,” he said. “He was drawn wide and was outpaced throughout.

“His form in Europe suggests he is looking for further. This time he’s getting up to 1400m which will be the right distance for him.”