Mr Malek signalled his candidacy as a very serious Singapore Classic and Singapore Guineas contender after he won his comeback race with a touch of class at Kranji on Saturday.

Billed as a match-race between Mr Malek and Rocket Star, another Classic and Guineas raider, the $70,000 Class 3 Division 1 race over 1200m was going to script with the two protagonists working ominously into the race from the 600m.

But when Lim’s Passion (Benny Woodworth), a last-start winner tagged as one of the rare rivals who could upstage the two favourites, suddenly swung out wide at the home turn, it had a concertina effect that flushed out the other runners towards the outside running rails, with the fast-improving Rocket Star (Vlad Duric) the worst victim, almost pushed out of camera. 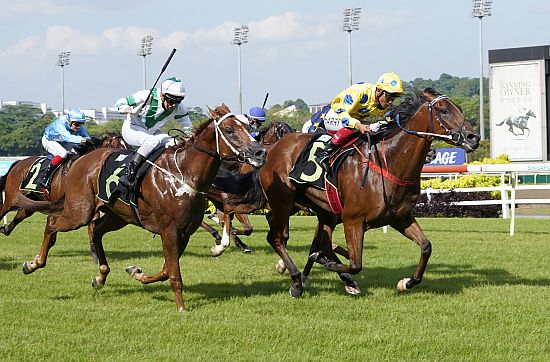 The much-hyped two-horse race wouldn’t happen after all, most thought, more so when upfront, well ridden by A’Isisuhairi Kasim, Mr Malek ($15) had in the meantime unleashed a steady turn of speed to get the upperhand of a combative Lim’s Passion.

But hopes in the Rocket Star corner were revived when the chestnut was seen still powering to the line even if the home turn scrimmaging had cost him at least a couple of lengths.

For a second, it looked like the impressive winner at his first-up run in a Class 4 race over 1200m could pick himself off the canvas, but Mr Malek is no pushover either.

Arguably, the Swiss Ace four-year-old enjoyed a cosier trip in transit, but take nothing away from Lee Freedman’s galloper who held his ground gamely to keep Rocket Star safely at bay by half-a-length.

Lim’s Passion also lost no marks by holding on for third place another short head away. Mr Malek clocked 1min 9.51secs for the 1200m on Short Course on turf.

Freedman had said earlier he had already mapped out a path towards the Group 2 Singapore Three-Year-Old Classic (1400m) on August 30 and Group 1 Singapore Guineas (1600m) on September 26 for the Oscar Racing Stable-owned galloper.

The two feature races are still slated as the second and third Legs of the Singapore Three-Year-Old Challenge, even if they are now open to Southern Hemisphere-bred four-year-olds (since they turned one year older on August 1) and Northern Hemisphere-bred three-year-olds, a change caused by the COVID-19 pandemic.

Mr Malek has now won five races in a row with his only defeat (third) occurring on debut. Stakes earnings have now gone past the $180,000 mark for connections.