Chocante back to winning ways

Chocante bounced back to winning ways in the $50,000 Class 4 Division 1 race over 1100m at Kranji on Saturday.

Trainer Shane Baertschiger actually thought the trip would be too sharp for the previous four-time winner, but under Vlad Duric’s determined ride, the Fastnet Rock six-year-old overhauled an equally resilient Headhunter (Marc Lerner) to poke his head in front where it mattered.

“He won five starts ago with Vlad in a 1200m race (March 15). I thought 1100m would be too short, but he was wearing blinkers for the first time since his first start,” said the Australian conditioner. 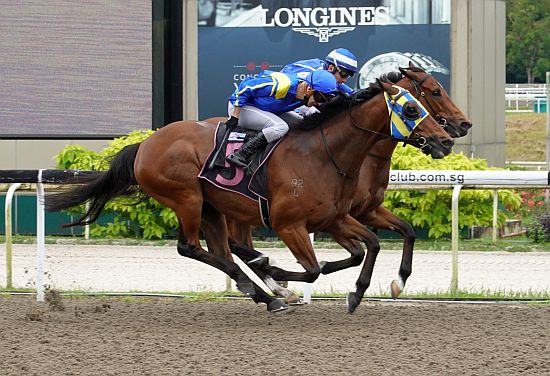 Chocante (Vlad Duric, on the outside) denies Headhunter (Marc Lerner) by a head in Race 3, picture Singapore Turf Club

“I just told Vlad to ride him where he was happy and he rode him a treat, but to me, the horse is more of a 1200m horse.”

Revolution (Ryan Munger) ran on late but had to content himself with third place another 2 ½ lengths away. The winning time was 1min 4.77secs for the 1100m on the Polytrack.

Blinkers for the first time since his debut run more than three years ago did not really see Chocante ($43) posie up closer to the speed, but a midfield berth on the steel certainly helped him save his petrol for that crucial last assault to the line.

When the field straightened up, Headhunter looked to have pinched a decisive break when he ducked to the inside rails and went for broke, but Chocante stalked him up right behind. At the 150m, the race could swing either way between the two protagonists, but the three-time champion jockey had timed his run to a tee.

“We had a good run throughout and he is back to his best form,” Duric summed up.

“Everything went right for him and we got there right in time.”

Everything went even better for the Australian hoop later, especially after a blank day on Singapore Gold Cup day with favourite Top Knight third in the big race, and as he was also coming back from a two-day careless riding suspension. After firing the first salvo in the opening event aboard Tigarous ($32) in the $30,000 Class 5 Division 1 race over 1600m, Duric later strung up two wins in a row to make it a hat-trick of wins.

Chocante rang up the second pin before $16 favourite Marikh made it win No 63 for Duric in the $20,000 Open Maiden race (1600m), vaulting him clear by nine winners on nearest challenger Ruan Maia (54 winners), who was serving a one-day ban for careless riding.

With that fifth win from 31 starts, Chocante has racked up close to $260,000 in stakes earnings for the More Stable.