Cherry Tortoni (by Night of Thunder) continued his development as a potential 3YO Classic contender when turning in a sublime performance to land the $120,000, Listed, VRC Kennedy Taj Rossi Series Final (1600m) — a 2YO Quality Handicap run on the Flemington card in Melbourne.

An impressive winner of his only two previous outings for the lethal combination of trainer Paddy Payne and jockey Billy Egan, Cherry Tortoni was set the task of carrying top-weight of 61kgs over the stiff metric mile journey of Victorian racing's headquarters. In the end, the promising juvenile did so in the style of a young horse going places in a hurry.

Ridden with supreme confidence in the second half of the field by Egan during the early stages, the handsome chestnut gelding was then put into the contest in earnest when entering the final 400m. No sooner had Cherry Tortoni been asked for his winning effort and the progressive young galloper had the race in the bag, finding more than enough to hold off the gutsy challenge of Alcyone (by Teofilo) in second.

Having only his second start in a race, Johnny Get Angry (by Tavistock) stayed on strongly at the finish to claim third at close on triple-figure odds. 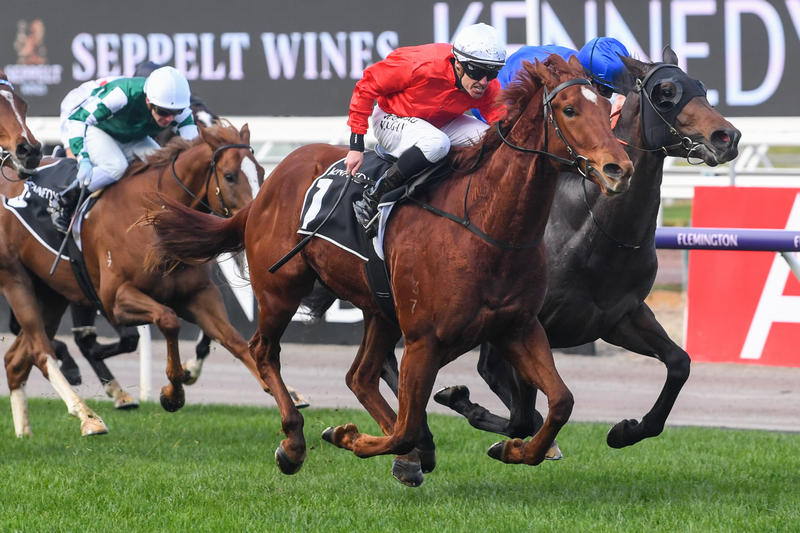 All honours, however, were well and truly with the winner who in the past six weeks has stamped himself as a horse with an unlimited future.

Raced in the famous red and white livery of the Tait family, Cherry Tortoni is owned by Mr O P Tait and Mrs J G Nivison. His three unbeaten starts have now earned his connections $145,525 following victories at 1200m on debut, 1420m second-up, and 1600m at just his third appearance in public.

Interviewed after the win, master horseman Paddy Payne remarked: “Extremely pleased with the horse. He’s a lovely horse to deal with. So are the owners, the Taits.

“When [patriarch] Sandy Tait sent him to me he said this is one of the nicest horses I’ve sent down. He could be a Derby horse, I’ll be guided by him.”

A typically guarded Payne added: “I’m not sure how good he’d be against the smarter three-year-olds over 1200 or 1400 metres, so I’ll give him a short break and look to an early spring mile race.

“He gave weight to the second horse [Alcyone], so I think that might’ve been a difference towards the finish line. But he went really well. He’s a big horse, so I can’t go too easy with him; he’ll just have a short break.”

“It was an impressive win today,” Egan declared. “I thought it was an even race and everything got their chance.

“I noticed that when I went for him that I really had to stick into him today to get past them. The other day there were a couple that were unlucky, so we didn’t know what they really had under the hood. Today they tested him, but it was good to see him put them away still.”

Egan concluded: “I was happy to wait as long as I could on him, get him to the outside and have the last crack on them. It was an evenly run race and every horse got their opportunity. They really put their foot down and it was good that he knuckled down and got on top of them.”

Cherry Tortoni was returned the $2.50 favourite, the runner-up Alcyone at $5.00, and the minor placegetter Johnny Get Angry at $81.00.

Margins of the race were a Short Head x 1¾L.

As made reference to at his previous Flemington success, Cherry Tortoni is a maternal grandson of the brilliant Group 1 winning race filly Whisked, who in turn produced the 12-time Group 1 winning galloper Tie The Knot.

Footnote: 80/1 outsider Johnny Get Angry was the very first runner for Denis Pagan and the newcomer to the training ranks was ecstatic with the 2-year-old's third placing.

Speaking after the performance, Pagan observed: “He was terrific. Just got held up for a while, but when he got out… terrific! Really gives us a positive outlook for the future. There’s a race [Byerley] here in a fortnight time over 1800 metres, then we might send him to Troy’s farm and see how we go from there.

“First runner as a trainer and coming third; it’s exciting. Just like playing my first game of footy. Terrific feeling.” 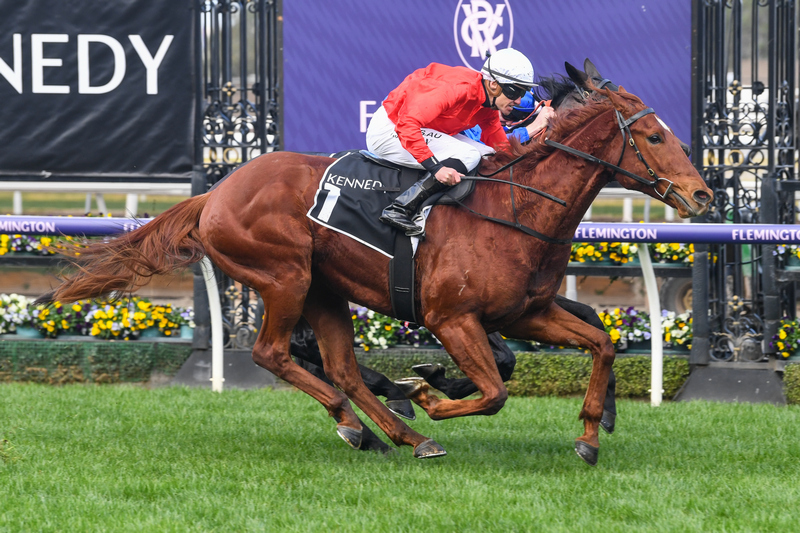