The Mick Price and Michael Kent Jnr-trained filly has now put her hand up for a start in the $1 million Group 1 Thousand Guineas (1600m) at Caulfield on October 17 with Saturday’s success.

Odeum was lining up for only her third start on Saturday and scored a one-and-a-half-length win under the urgings of Michael Walker.

The daughter of Written Tycoon was successful on debut at Moe last month before striking trouble at The Valley at her latest effort when fifth to stablemate Night Raid in the Listed Atlantic Jewel Stakes (1200m) on September 5.

Walker told Price the filly should have finished top three on that occasion and has no doubt the rise in distance of the Thousand Guineas will suit Odeum.

Odeum firmed from $34 into $15 with TAB for the Thousand Guineas which has Instant Celebrity a $6 market leader from Mozzie Monster and Night Raid at $8.

“We thought she could run a place today but to win like that by a big margin, ears pricked, that was awfully impressive.

“It was a lovely ride by Michael Walker and she ran (today) like the mile would suit her.

“Obviously the (Thousand) Guineas is now on the agenda.

“It’s fantastic, a nice problem to have.”

Trainer Dean Binaisse says the monkey has finally been lifted from his back after Felicia outsped her rivals to claim the $160,000 Group 3 How Now Stakes (1200m) at Caulfield.

Feleicia raced to a two-length victory in Saturday’s race for mares having finished second in Listed company at The Valley at her previous start.

“This is my first group or listed winner, I keep running seconds or thirds in them, it drives me nuts,” Binaisse said.

“It’s good to get the money off the back, it’s probably a gorilla that just went past.”

Binaisse was confident heading into Saturday’s race the mare had improved off her last start second behind Showmanship.

“I’ve just got to thank the owners for sticking and giving me the opportunity,” Binaisse said.

“I said to Craig that she had improved again since the other day after having the month off.

“I keep saying to the owners that if we give her a spell then she’ll come back better again.”

Felicia’s win provided Williams the third leg of a treble after success aboard Fabric in the PFD Food Services For NJT Handicap and Behemoth in the Group 1 Sir Rupert Clarke Stakes.

“I’ve reflected on my day with my riding coach and I should have had four winners today,” Williams said.

“I’ve had a really good day and most things have gone well.” 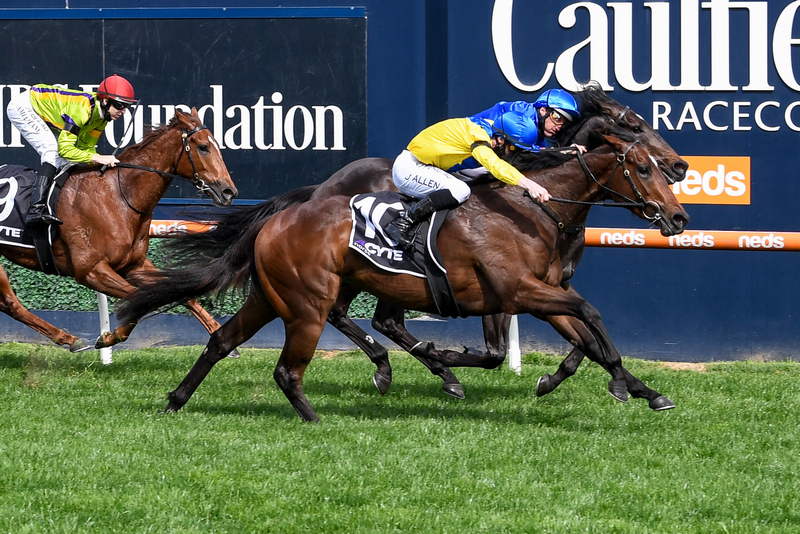 John Allen on Muntaseera (yellow) along with all the jockeys wearing black armbands in memory of the late Pat Smullen, picture Racing Photos

Jockeys riding in the 4Cyte For Living Legends Handicap at Caulfield on Saturday wore black armbands as a mark of respect for Pat Smullen.

In a fitting result, Irish jockey John Allen guided the $3.50 favourite Muntaseera to victory in the 1000m scamper for three-year-olds.

A former leading rider in Ireland, Smullen lost his battle with pancreatic cancer during the week.

While Allen did not ride against Smullen often before moving to Australia, Smullen’s wife Frances Crowley provided the jockey with his first winner.

“I did share a weighing room with him for a very long time and by all accounts he was a fierce competitor and a very humble man off the track,” Allen said.

“Condolences to his family. His wife, Frances, his three kids, Paddy, Hanna and Sarah, the whole racing community has lost a man that will leave a big hole in Irish racing, but also worldwide.”

Muntaseera, who notched her second win on Saturday, brought up a winning double for the Ciaron Maher and David Eustace stable after Wise Counsel scored in the Lonboard For Mirabel Handicap (1600m).

“We can obviously step her up now and we really thought that the Blue Sapphire would be a lovely race for her and if she wins that then you can look towards a race like the Coolmore,” Eustace said.

Eustace said Wise Counsel, who broke his maiden status with Saturday’s win, will be given the opportunity of showing he is up to running in the $2 million Group 1 Victoria Derby (2500m) at Flemington on October 31.

“He’s obviously a winner here as well and you’ve got the Caulfield Classic, so we’ll put him on that path now and see how he comes through.”

FROM WITHIN TOO SPEEDY IN CAULFIELD RETURN

Trainer Danny O’Brien has picked out the $175,000 Listed Alinghi Stakes as the spring target for From Within after her first-up win at Caulfield.

The Alinghi Stakes (1100m) is run at Caulfield on October 17 and is a race From Within took out in 2018 when trained by Toby Edmonds.

From Within proved too speedy for the favourite Front Page in Saturday’s The Henley Homes APC Handicap (1100m) at her first run since June and in the process scored her first win since April last year when successful at Eagle Farm.

Despite having her fourth start for O’Brien, the trainer said it was the first time the mare had been under his care for a complete preparation.

O’Brien said From Within had been trained primarily from his training complex at Thirteenth Beach ahead of Saturday’s return.

“We got her off another stable and then gave her a winter down at Thirteenth Beach where she’s done a lot of beach work,” O’Brien said.

“I think that might’ve made her a little bit tougher and fitter than what she’s probably been in the past.”