Caspar Fownes’ red-hot form continued at Happy Valley on Wednesday night with the three-time champion trainer slamming in a double to extend his early lead at the top of the premiership. 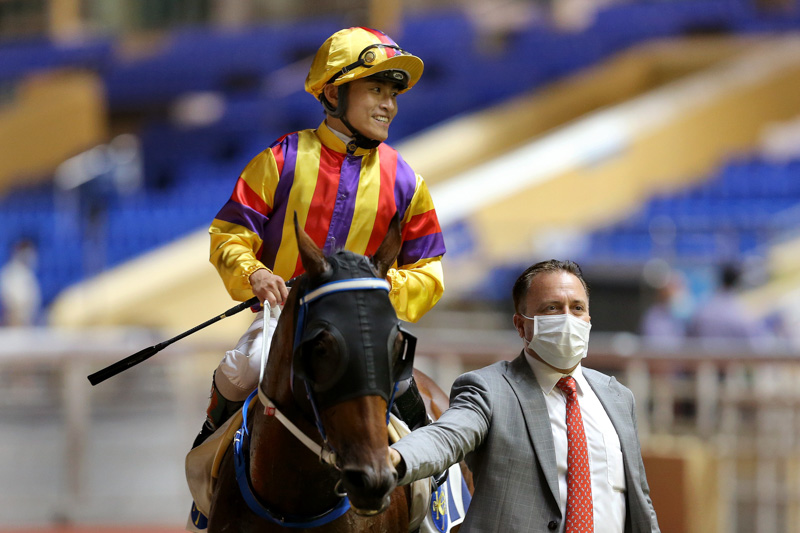 With six wins at the city circuit from three meetings, Fownes is living up to his nickname as the “King of the Valley” and he kicked off his evening’s tally when Jazz Steed and Chad Schofield dead-heated with the Francis Lui-trained Shining On and Vincent Ho in the Class 4 Repulse Bay Handicap (1200m).

“I thought Francis (Lui) had got me right on the line, so I’m very happy with that result,” Fownes said. “Last season we had a similar race that I thought I’d won but lost, this time we dead-heated – no complaints.”

Jazz Steed, a Hong Kong International Sale graduate, took his record to two wins from 10 starts with that win, and, with a current rating of 54, he is just six points shy of a Class 3 berth.

“We’ll see how he is, he’ll probably only get four points because it was a close finish and a dead-heat, so we’ll try to find another race for him in a few weeks,” Fownes said.

After a disappointing 11th first-up, the Exceed And Excel gelding reversed his form tonight with a win, the first of a double too for Schofield who praised Fownes for the galloper’s turnaround in form.

“I think the tongue-tie changed him, he’s a horse who has ability and last start was too bad to be true; well done to Caspar (Fownes) for rectifying the problem, he deserved a win and it was good to see him bounce back from his defeat,” Schofield said.

While an added piece of gear was the key to Jazz Steed, Shining On benefited from a short stint away from Sha Tin.

“Conghua has made him more relaxed, most of my horses based there have become more relaxed,” Lui said of the co-winner.

Schofield went on to secure his double in the following race, the Class 4 Middle Bay Handicap (1000m), aboard the Manfred Man-trained Farm Bumper.

“He was quite impressive today - I know him quite well from last season and he was always close in Class 4 but today he won with a bit of purpose,” Schofield said.

“It was a good win and Manfred (Man) had him nice and fresh coming into today and I think being fresh over 1000 metres is his go.”