Neil Callan’s fine run of form has fired him into contention for the coveted final spot in the LONGINES International Jockeys’ Championship and at Happy Valley on Wednesday night he will attempt to seal his place from five rides in the eight races left to play out.

The Irishman has bagged three doubles for six wins from his last four race meetings to leap-frog his rivals and occupy the coveted sixth spot designated to Hong Kong-based riders. He and Vagner Borges each have 11 wins for the term but Callan has the edge over the Brazilian on a countback with 12 seconds to Borges’ six.

“If we get through tomorrow night and we get some luck, or nobody else gets an advantage on me and the results stays the same, then hopefully I’ll be happy. If it does happen, it does: if it doesn’t, it doesn’t,” Callan said.

This year, the Hong Kong Jockey Club elected for a half-and-half split of competitors in the 12-jockey competition on 9 December. Six jockeys from overseas and six based in Hong Kong will vie for the most lucrative jockeys’ challenge winner’s cheque in the world – HK$500,000 – and Callan, along with Alexis Badel who sits fifth in the local premiership, could join Zac Purton, Joao Moreira, Karis Teetan and Vincent Ho as Hong Kong’s representatives.

“I’ve been here so long with my family and Hong Kong has been so good to us that the meaning of it would be a little different than it was before – but what will be will be,” Callan said.

“I represented Ireland quite a years ago as an international jockey but if I was able to represent Hong Kong, especially having been here for so long and had quite a lot of success here, it would mean a little bit more – it’d be nice to take part.”

Callan first participated in a LONGINES IJC in 2008, representing his home country, but this time he would be on the home side if successful, by virtue of having relocated full-time to what is arguably the world’s most competitive circuit ahead of the 2014/15 season.

Callan has yielded 266 Hong Kong wins, including the Hong Kong Classic Mile on Beauty Only and three at G1 level aboard the brilliant Blazing Speed who took the 2015 QEII Cup (2000m) and two Standard Chartered Champions & Chater Cups (2400m) in 2014 and 2016.

“The last 10 days, my luck changed and put me in a good position so we just need to extend that luck by one more day and hopefully we’ll be right,” the rider said. 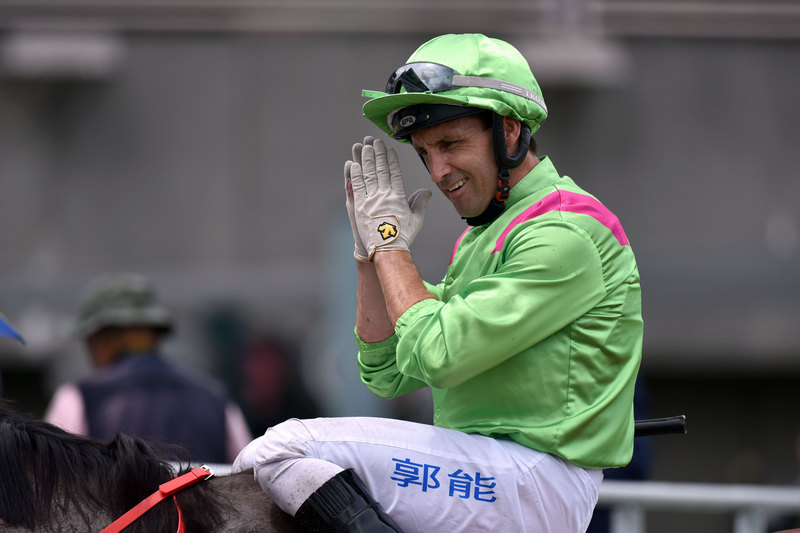 Among Callan’s five mounts is the Manfred Man-trained King Dragon, a first--time ride, in the second section of the Class 4 Tsing Lung Tau Handicap (1650m).

“He’s been racing ok, his form is a little bit up and down but he’s shown in his past couple of runs that he is more than capable,” Callan said.

The Savabeel gelding is looking for his first win but has six top-three efforts to his name from 13 Hong Kong runs.

“He’s got a little bit of a tricky draw but from riding him in trackwork he feels like a horse that likes to just be chilled in his run rather than dug up, because he’s a little bit tense and he’s not a horse that you want to fire up,” Callan said.

“He’ll sit where he’s comfy and as long as they run along and he gets a nice spot, wherever that may be, then he should be able to hit the line,” Callan said.

While Callan has still got a fight on his hands for that sixth IJC position, Alexis Badel looks to have his all but wrapped up thanks to 15 wins for the season, four clear of Callan and Borges.

“I’m still very focused on my job but it comes as a nice surprise for me, it’s a big challenge and I’m very keen on it, I’m looking forward to being a part of this amazing challenge,” Badel said.

The French ace is booked for seven rides at the midweek fixture, including a renewed association with the Frankie Lor-trained Virtus Star who is looking for a hat-trick of wins in the Class 5 Yau Kom Tau Handicap (1650m).

“The horse is in great form and he has done a great job this season, I still think he is competitive, he is in good form and he should run a good race,” Badel said.

The Australian-bred took 22 starts to break through in Hong Kong but has now found his groove with two solid wins.

Chris So believes maturity was the key to Classic Unicorn’s (129lb) first-up success and he is hopeful that his talented speedster can repeat the dose in Wednesday’s feature, the Class 2 Chai Wan Kok Handicap (1000m) at the Valley.

“The horse is more mature now as a five-year-old: across the summer break it seems like he has improved a lot, some horses in Hong Kong they just need time to develop, the body, everything – even now, he’s a big horse,” So said.

So’s talented chestnut registered a smart first-up success after travelling three-wide early on. The gelding managed to put his rivals to the sword by a length and three quarters under the hands of Derek Leung, who will be in the plate again from gate one.

“The key is that he was more relaxed: at the start of his last race I was chasing him to push him forward for the lead but I didn’t want it because he has had breathing problems,” Leung said. “I just let him roll and gave him more time to go forward but he was more relaxed so he could finish, if I rush him he can’t finish off.”

The New Zealand-bred has four wins from eight starts and sits on the cusp of a triple figure rating with a current figure of 91, eight higher than his last start.

“Last season, even after each race he didn’t eat much, he was a bit skinny and he needed so much time to recover but this time, since the summer time, he’s been impressing us,” So said.

“Hong Kong Win is no doubt a little bit fitter than before, his last race suggested he was fitter and now he’s back to Happy Valley where has won once very impressively,” Moreira said.

The smart Australian-bred is also a four-time winner, and will step out for his fourth run of the campaign following an improved second-up effort to snare third.

“He’s getting better, I think he can win in Class 2 and the horse has improved from his last run,” Lor said of Larson.