Owen Burrows is assessing a range of options at Doncaster's St Leger meeting for impressive debut winner Albasheer, who hails from the family of Nashwan.

The Lambourn trainer, who has achieved first successes at Royal Ascot and Glorious Goodwood this season, is also eyeing big autumn targets for more established stable stars Hukum and Tabdeed.

Albasheer, a two-year-old son of the late Shamardal, caused a stir when winning a 7f Doncaster novice last month by six and a half lengths for Hamdan Al Maktoum, whose colours Nashwan carried to momentous triumphs in the 2,000 Guineas, Derby, Eclipse and King George in 1989.

"He's very exciting – a proper horse with a proper pedigree," said Burrows. "He worked well at home but I didn't expect him to be quite as impressive as he was. Sheikh Hamdan rang me that evening and told me to treat him like a good horse.

"He's had an easy week since Doncaster and we'll look to go back there for something at the St Leger meeting. There are a few options, the Champagne, a Listed race and a conditions race over seven furlongs."

The St Leger is the aspiration for King George V winner Hukum, who picked up an injury at Royal Ascot but is now being readied for the Geoffrey Freer Stakes at Newbury on Saturday week.

"We had contemplated going to Goodwood, but he got struck into on his right hind at Royal Ascot, which required stitching, and we decided to give him a bit more time," said Burrows, who won the last race of the Glorious meeting – the 1m1f apprentice handicap – with Muraad.

"He's fully recovered and has been pleasing in his work, and I'm hoping Jim [Crowley] will come in on Wednesday to ride him and then hopefully he'll run in the Geoffrey Freer.

"We've always felt he's a decent horse and he's won a good handicap, so we'll learn a bit more at Newbury. I know it's a mile and five, but he certainly wasn't stopping at Ascot. Hopefully, things will go right and we can dream of the St Leger." 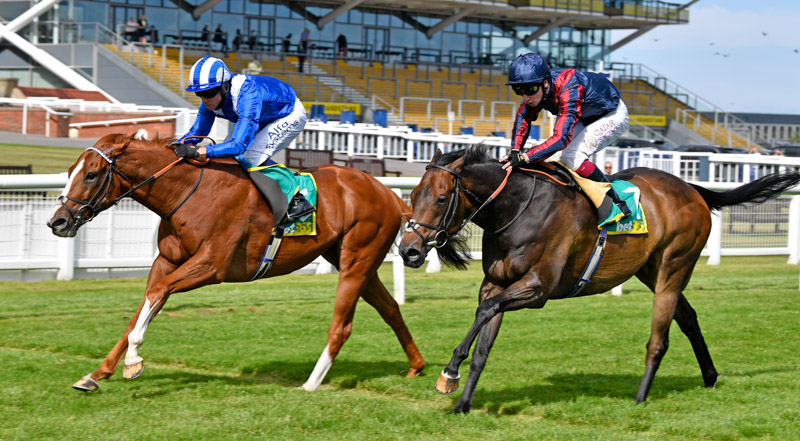 The trainer has been forced to take the patient approach with last month's Group 3 Hackwood Stakes winner Tabdeed, who is poised to make the step up to the highest level.

"He's come out of the Hackwood fine, but slightly disappointingly there isn't a six-furlong sprint in this country in August," added Burrows.

"He's probably best on genuine good ground and wouldn't want it any quicker than Newbury that day [good], so maybe the ground wouldn't be with him anyway.

"There's the Haydock Sprint Cup in early September, which would be a big leap up, and if we're happy with him we might have a punt at that.

"It would be great if we could be in the Champions Sprint at Ascot at the end of the season. That would be the ultimate aim, whether it's realistic time will tell."