Never out of the placings at his previous seven starts, Brutus finally broke through for a well-deserved first win on Saturday.

Lined up in the $75,000 Novice race over 1200m on the Polytrack, the honest four-year-old son of Rubick was again thereabouts when the whips were cracking inside the concluding stages, but he was able to hold sway this time.

It nearly all came unstuck again, though. As Brutus hit the front, he was seen begging for the line as favourite Tuesday (Juan Paul van der Merwe) came charging home on his outside, but the winning post came to his rescue by a nose. 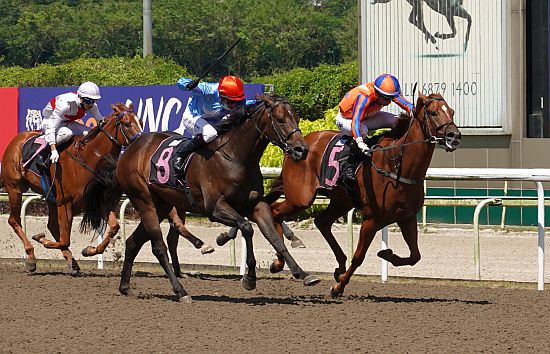 After staging a speed battle with the other well-fancied Infinite Wisdom (Simon Kok Wei Hoong) from the outset, Gold Prize (Ryan Munger) got weary late, but still plugged away for third place another 2 ¾ lengths away, beating Infinite Wisdom to a podium finish by three parts of a length.

Thanks to his consistency in chalking up minor prizemoney right through his budding career, Brutus has earned a tidy sum of $110,000 for the Fortuna NZ Racing Stable, a laudable feat that did not escape trainer Mark Walker’s attention.

“Brutus’ win is a great example of the good prizemoney in Singapore. Even though he has never won before, he still made $110,000,” said the Kiwi handler.

“It’s great for John Galvin (of Fortuna Racing) who works so hard to bring new people into racing. He doesn’t buy expensive horses, but they sure can win races.

“As for the race itself, I left it to Ruan to ride his own race. I think it also helped him that Brutus has morerace experience than a few of those, like the second horse (Tuesday) who won well on debut.”

Galvin was a happy man post-race.

“That was a fantastic result – Brutus has never run a bad race, but always seemed to have run into one that was better than him on the day,” said the Fortuna director.

“However today he contested a Novice as a Maiden and pulled off a great victory for his very patient ownership team.

“Congratulations to Mark Walker for handling this horse so well and big kudos to Ruan Maia who put his hand up for the ride earlier in the week and then rode the horse perfectly.”

After Michael Clements levelled up and even passed Walker at the top of the ladder with his training treble (see earlier report), Brutus’ win has once again brought the two trainers tied at the top.

Such is the ding-dong battle between the two trainers that Walker just led on a better countback for thirds! They both have the same amount of seconds (42) with Walker, however, having a lot more thirds than Clements (42 versus 28).