Corumbene Stud-bred and-raced Bottega is set to begin a new campaign at Rosehill Gardens this Saturday after a series of very promising performances as a late maturing three-year-old trained out of the Gerald Ryan and Sterling Alexiou stable.

Runner-up in both the Carbine Club Stakes (1600m) and Frank Packer Plate (2000m) at Group 3 in April, the princely-bred son of Snitzel then scored a very well deserved win over 1800 metres at Royal Randwick back in Benchmark company against older opposition.

Bottega resumes in very similar company to his Randwick win this Saturday when taking his place in the $125,000, Quayclean Bm88 Handicap (1400m) and the entire’s connections are expecting the progressive home-bred to commence an important spring campaign on a very bright note.

Speaking on behalf of the four-year-old’s ownership group, Tommy Altomonte — grandson of patriarch George — said that the immediate intention is to keep Bottega to shorter distances with the hope of developing him into a Golden Eagle (October 31) contender.

“We expect Bottega to run well on Saturday despite his best form being over a longer distance,” informed Altomonte Jnr.

“Gerald [Ryan] has indicated to us that he has returned a lot sharper this preparation. The intention is for him to race again in [another] three weeks before potentially contesting the Golden Eagle. ”

Due to the timing of the Golden Eagle, Bottega isn’t expected to be venturing south to Melbourne at any time in the coming weeks, with an eye also being cast towards the Sydney Autumn Carnival. 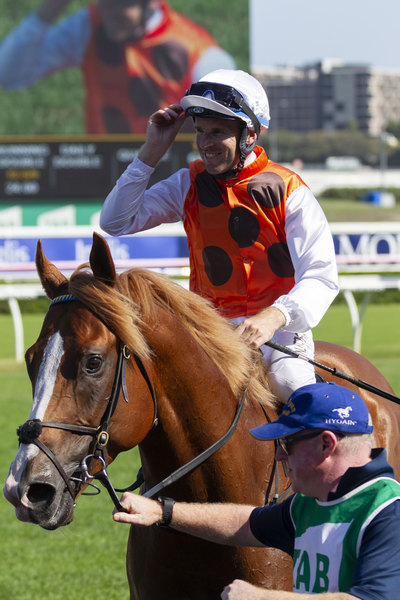 Bottega’s return to racing will come a week after high-profile Corumbene representative Standout had his first start of a new campaign when proving very competitive in the hotly-contested Group 2 The Shorts at Royal Randwick last weekend.

Standout actually loomed up to win the race with 200 metres to go before running out of condition at his first race start since mid-April and Tommy Altomonte says that all things considered, everyone involved with Standout was generally pleased with the effort.

“Overall we were happy with Standout’s first-up run considering the circumstances. They were some of the strongest sprinters in the country and it had been a while since his last run. He may have just needed the run.”

One of the most familiar sights in Sydney racing, the Altomonte family’s orange, brown and white livery was also recently seen in the winner’s enclosure after the gutsy Warwick Farm maiden victory of the promising three-year-old filly Deniki.

The famous colours seem certain to be featuring again in the weeks ahead, and quite possibly as soon as this Saturday.

The Quayclean Handicap is Race 9 on the Rosehill programme at 5.25pm with Bottega at $9.50 with TAB's market. Nash Rawiller rides with barrier five and 58.5kg.