After the Group 3 Saas Fee Stakes was recently cancelled, leading trainer Michael Clements is glad he still has a fallback plan for his smart three-year-old Big Hearted.

One of last year’s best juveniles, Big Hearted staged a victorious comeback in a Class 4 race over 1200m on January 4 to bring up his score to four wins, but was, however, tipped out straight after.

With the Saas Fee Stakes (1200m) scheduled to a new date on April 18 (last year’s was in November in which Big Hearted actually ran second to Inferno) and the Singapore Three-Year-Old Challenge moved back to a June-July timeslot, Clements was careful in picking his way through the programme for the son of Hallowed Crown. 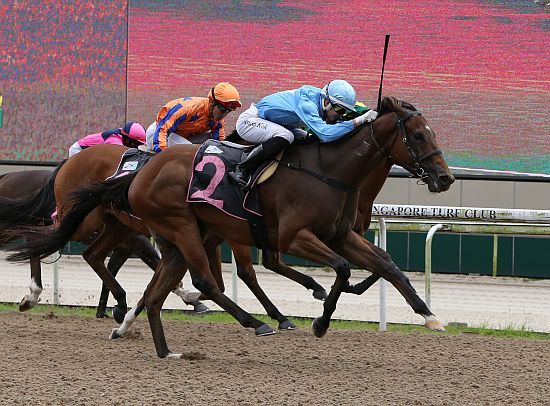 When news came through on Monday that the Saas Fee Stakes was canned due to the latest Covid-19 restrictions resulting into a downscaled calendar (down to twice-a-week racing to only Friday meetings), those well laid-out plans were thrown in disarray.

But everyone else was in the same boat. Offered as a stopgap measure, a Class 3 race over 1200m on April 17 might not have the same appeal as a Group race, but beggars can’t be choosers, in a manner of speaking.

“He was getting ready for the Saas Fee Stakes, but when it was cancelled, a Class 3 race over 1200m was put up as a substitute race,” said Clements.

“He will run in that race instead. He will need a couple of runs afterwards heading towards the 3YO series, though we’re not sure if the date of the first Leg (Group 3 Singapore Three-Year-Old Sprint over 1200m on June 15) will stay the same.

“It was always the plan to trial him the week before the Saas Fee Stakes, so that’s why he trialled today.”

“This horse thrives more on light work. Since his last run, we gave him time off for only one week or two, and we’ve then kept him in work,” said Clements.

“He has kept stepping up to the mark as we saw at his last couple of wins. Every prep, he has come back better and stronger.

“We’ve tried to maintain the same sort of progression, and this year again, the plan for him was to have a good prep towards the Guineas.”

The Group 1 Singapore Guineas (1600m) is the third and final Leg of the Singapore Three-Year-Old Challenge and is this year due on July 26, barring any further changes due to the constantly-evolving pall the Covid-19 pandemic has cast over racing, let alone the world.

Clements, who current tops the log on 21 winners, one clear of reigning champion trainer Mark Walker, had only three triallers on Thursday, the first two being two unraced Irish- bred three-year-olds in the first heat, Tigarous (Beuzelin) and Balor (Patrick Moloney) who finished 1-2.

“It’s a new stable, but the owners are local and had horses with other trainers before. These are the first horses they sent to me,” said Clements.

“We’ll see how they come out of the trial, and then decide if they are strong enough to have their first runs here.

“At this stage, I just want to see if those trials might benefit them as they are young horses from the Northern Hemisphere and are six months behind.

“The trials will certainly help in their education. In those times when there are fewer race meetings, we have to be even more careful with their prep.

“Still, I’m very grateful and thankful races are still on in Singapore, even if it’s limited races and very limited opportunities.

“I can only hope that everybody can live through these very difficult times.”

This Friday’s meeting is the first of a Covid-19-induced amendment to the racing calendar for the month of April where Sunday meetings were cancelled, cutting down the number of meetings from seven to four. They are all held on Friday night, except for next week when the April 10 meeting is a Good Friday meeting held in the afternoon.