The Lee Freedman-King Power Stable team enjoyed a great day at the office with two winners at Kranji on Sunday – My Big Boss and Minister.

While My Big Boss had to leave it late – his jockey Juan Paul van der Merwe looked ever so confident at the 300m when seen hardly flexing a muscle even with favourite Water Rocket (Vlad Duric) two lengths clear upfront – Minister elected for his customary go-forward role, displaying great heart in repelling the last-ditch challenges. 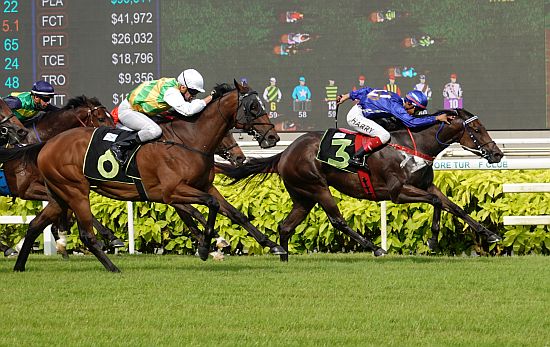 Once unleashed down the middle of the track, My Big Boss ($20) swept past Water Rocket with ease to go and score by two lengths from Water Rocket who beat the next best, Diamond Rush (John Sundradas) by the same gap. The Smart Missile five-year-old clocked the winning time of 1min 11.94secs for the 1200m on the Polytrack.

Minister ($43) was also rated to the minute, but from the front by A’Isisuhairi, who never lost his cool when Destroyer Eclipse (Marc Lerner) came eye-balling him upfront, waiting for the right moment to stoke his mount up for that final dash inside the last 300m.

The US-bred four-year-old by Street Sense worked home solidly, but had to dig deep to outlast the fast-finishing Beau Geste (Vlad Duric) by a head with Big Hearted (Louis-Philippe Beuzelin) third another half-length away. The winning time was 1min 22.06secs for the 1400m on the Short Course

Known as Bye Bye Hong Kong in England where he won three races between 1219m and 1640m under top trainer Andrew Balding’s care, Minister used to present a conundrum for the races he was bought for.

The Singapore Derby (1800m) was earmarked as his goal, but when the whole Singapore Four-Year-Old Challenge was brought forward by three months, his training programme was thrown in disarray.

After a rushed prep, he didn’t show his potential in the first Leg, the Group 3 Silver Bowl (1400m). Freedman then decided to all but can the series, including the third Leg, the Singapore Derby.

But after the unscheduled COVID-19 break, the Derby was postponed to September 6 in a major overhaul of the Singapore racing calendar, rekindling the original plans.

“He’s entered for the Kranji Mile but he may not get in,” said Freedman.

“He’s instead going to a Class 2 race over the mile in two weeks’ time and he will then go to the Derby.

“I was very happy with his win today. From his style of racing, it was always the plan to go forward.

“To do it first-up after three months with 58.5kgs on your back, he did a very good job. He will improve from that first run.

“My Big Boss has a short burst and JP knows him very well. He knows how to ride him.”

My Big Boss has now taken his record to four wins and 10 placings from 23 starts for just under $220,000 in stakes earnings for the King Power Stable while Minister was only posting his second local win from three starts for around $75,000 pocketed for the same Thai connections.