Beuzelin all pumped up about Big Hearted

Beuzelin has linked up with the Michael Clements-trained son of Hallowed Crown at four outings for one win, which was the last of his haul of seven wins, coming in a Kranji Stakes B race over 1400m on April 10.

But it was actually the previous start, run in defeat when a flying third to Lim’s Lightning in a Class 2 race over 1200m that was to Beuzelin the real yardstick in lining up the 2020 Singapore Gold Cup (2000m) winner’s chances at his next marquee target this prep, the $1 million Group 1 Kranji Mile (1600m) on May 22. 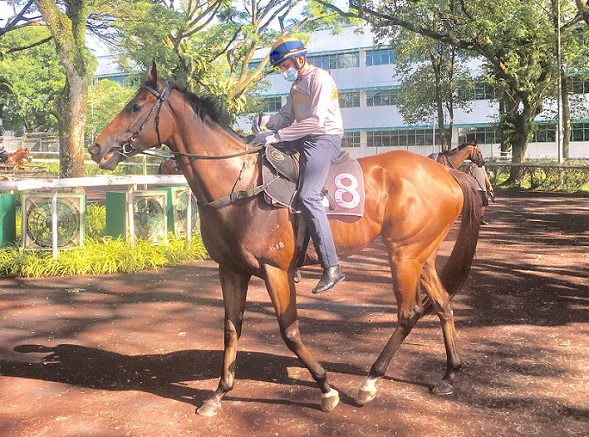 “At his second-last start, he finished only less than half-a-length off Lim’s Lightning in a 1200m race,” he said.

“He was finishing strongly, and I thought we would get past Lim’s Lightning, but Daniel Meagher’s horse was too good that day, and he then went on to win the Group 1 Lion City Cup, which makes that a very good formline.

“That form speaks for itself. Big Hearted then won his next race in great style. I’m very confident, he trialled very well on Tuesday.”

Big Hearted was one of the runners in that much talked-about top-quality barrier trial on Tuesday. From nine runners, only Yulong Edition was not a Kranji Mile hopeful.

Rocket Star was the one whose stocks soared the highest in the wake of his resounding win, but Beuzelin wouldn’t swap his mount for any other horse.

Holding Big Hearted up in a rearward spot in the first two-thirds of the trial, Beuzelin must have chuckled to himself when he slipped some reins for that sneaky late opener. Big Hearted cruised home for an eye-catching fifth around four lengths off the winner.

“1000m is too sharp for him but he still finished off very well. He’s in very good form,” said Beuzelin who boasts two local Group wins at Kranji (last year’s Group 2 Chairman’s Trophy on Countofmontecristo and Group 3 Silver Bowl on Bold Thruster), but has yet to land a Group 1 win.

“I’m only worried about his barrier, though. The Kranji Mile is a race that suits a good miler who can quicken on a small track.

“Basically, it will be the horse who can see out 1600m and have a turn of foot.”

Assistant-trainer Michael ‘Chopsy’ White saw no reason why that horse couldn’t be Big Hearted, even if he wished his build-up had been more conventional.

“Like Top Knight, Big Hearted also had a long break after the Gold Cup, but his prep has been slightly less unorthodox,” said the Australian.

Given his enviable position as Clements’ No 1 jockey, Beuzelin only set his sights on Big Hearted as his ticket to this year’s big races after the revamped feature race line-up was rolled out and champion jockey Vlad Duric confirmed he was sticking with Top Knight, but such is the embarrassment of riches at the Zimbabwean-born handler’s yard that his heart is a little divided.

“I’m very happy with Big Hearted, but one of his biggest dangers will be Tiger Roar, if he gets a run,” he said.

“It all depends how he runs this Saturday. Shafrizal (Saleh) will ride him, while I’m committed to Leatherhead in that race.

“The Kranji Mile will be very competitive this year. I think Rocket Star and Lim’s Lightning will also test him.”

Tiger Roar is the Clements rising star who has somehow filled the big horseshoes left by the now Australian-based Inferno to become Kranji’s new pin-up horse, what with his three-in-a-row all posted in his trademark last-to-first winning style.

Only three, the son of Wandjina, however, absolutely needs a fourth win this Saturday to give himself a better chance of making the cut. On 73, that get-out-of-jail card may still not save him unless he scores a big win in the $70,000 Class 3 race over 1600m, and a few entries ahead of him drop out of the race.

“It’s not an ideal prep as it wasn’t a race we had planned for him. He only got in so he can hopefully push his ratings to get into the Kranji Mile,” said White.

“If he runs, we’ll be in the odd situation where our three horses are all backmarkers, Top Knight, Big Hearted and Tiger Roar, settling in the last three places, but there is every chance they will start as first, second and third favourites.

“If Tiger Roar doesn’t run in the Kranji Mile, then we’ll find something that is down to his ratings. Plan B could be the 3YO series even if there isn’t any Singapore Guineas.

“We’ll then just put him out, and aim him at the Gold Cup. He actually has exactly the same profile as Big Hearted.

“As for Elite Incredible (also entered in the Class 3 race), it’s the same, he’s also low in the Kranji Mile entries, but is heading more towards the Gold Cup. He needs to run, and he will appreciate the Long Course.”