Belichick, second to Mighty Heart in the Queen’s Plate, turned the tables on his stablemate, and trounced his nearest rival by four lengths in the 129th running of the $400,000 Breeders’ Stakes, Saturday at Woodbine.

Coached by conditioner Josie Carroll, who also trains Mighty Heart, Belichick proved to be much the best in the 1 ½-mile turf marathon, and final jewel in the OLG Canadian Triple Crown.

Mighty Heart, the one-eyed wonder colt, was looking to become the first horse since Wando in 2003 to sweep all three races in the series. The bay Ontario-bred, bred and owned by Larry Cordes, was impressive in winning both the Queen’s Plate at Woodbine on September 12 and the Prince of Wales Stakes at Fort Erie on September 29.

On this day, however, it was Belichick’s time to shine over the E.P. Taylor Turf Course, courtesy of a maiden-breaking masterpiece.

It was Mighty Heart, sent off as the even-money choice, who was immediately directed to the front by Daisuke Fukumoto. The son of Dramedy was quickly engaged by longshot Kunal into the first turn, as the duo took their rivals through an opening quarter-mile in a brisk :23.69. Told It All and Clayton (the bay son of Bodemeister, who was third in the Plate and second in the Prince of Wales) were well back in third and fourth, respectively. Belichick, sent off as the 3-1 third choice, sat sixth under confident handling from Luis Contreras.

Mighty Heart and Kunal continued their front-end battle after a half-mile posted in :47.45, still well ahead of their closest pursuers. Belichick, still waiting for his cue from Contreras, began to pick up momentum moving into fifth spot.

After three-quarters in 1:13.02, the field began to converge on the leaders, with Contreras steering Belichick to the outside to take aim at the tiring front-runners. Just before the turn for home, Belichick took command as Mighty Heart began to fade to the inside.

At the stretch call (timed in 2:07.38), Belichick was in full flight, dashing away from his rivals with ease, as late-running 54-1 outsider Meyer rallied to take second spot. English Conqueror got up for third, a half-length in front of 41-1 Deviant for the show award. Mighty Heart finished seventh. Olliemyboy, 11th in the Queen’s Plate, was scratched. 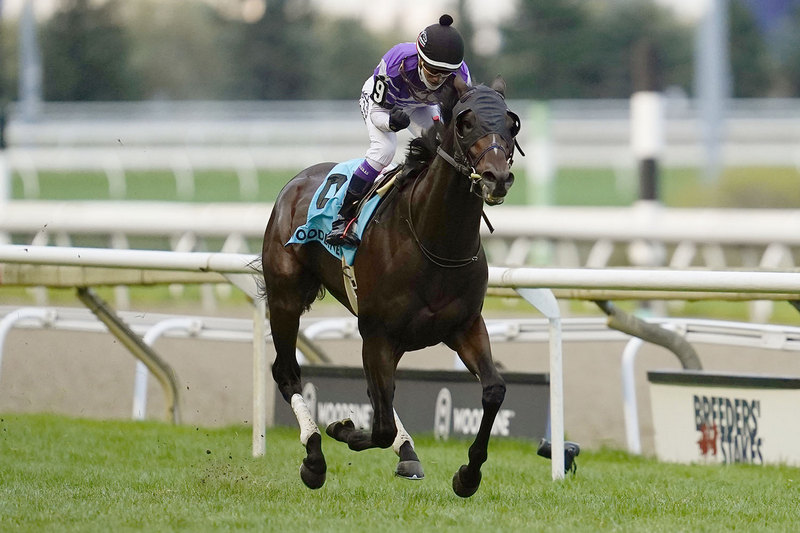 “They kind of broke early in the race so I just tried to see them and relax my horse as much as I can,” said Contreras of the early front end speed. “He was very uncomfortable; this horse has a different style to run so I just let him be happy wherever he wants to be.

“Turning for home, I was just in hand all the way to the quarter pole and I asked him to run from the stretch home and he did. I was just watching, just feeling my horse at the same time. And he was doing great the whole way. He came into this race very ready, good thing for Josie and all the crew.”

Fukumoto didn’t expect to be on the engine with Mighty Heart.

“Today he broke good and I didn’t plan on going to the front. He was sharp like in the Queen’s Plate, I tried to take hold and he relaxed a little bit in the backstretch, but with the mile and a half you need the stamina. I think he just got tired. He tried hard today, I tried to take hold too…but that’s racing. He gave me many experiences and I’m so proud of him. I want everyone to keep following him when he runs again next time.”

Said Carroll, “I told him [Fukumoto], ‘Let’s see how this falls out. If you make the lead, watch your fractions…it’s a long, long race.’ The horse broke well, he found himself up there, unfortunately another horse dogged him the whole way and he couldn’t get the horse to come off the bridle and relax.”

The Canadian Horse Racing Hall of Fame inductee was impressed, but not surprised by the winner’s strong showing.

“I’ve said from the very start that Belichick is a very, very special horse that’s just coming into his own and I think he showed that today. He’s a powerful horse. The Queen’s Plate was a breakout race for him and we couldn’t come back that quickly in the Prince of Wales. A horse needs a little time to regroup from something like that, a young, inexperienced horse. And regroup he did.”

Owned by NK Racing and LNJ Foxwood, Belichick is now 1-2-1 from four starts in his career.

The son of Lemon Drop Kid, unraced at two, finished third in his career bow on July 4, following it up with a runner-up performance in his second start on August 1.

After his second-place finish in the Plate, Belichick’s connections drew up a perfect gameplan for the Breeders’.

“He’s a different horse,” noted Carroll. “He was so distracted the first race. I came over here with high expectations of him, I knew in the paddock I was in trouble…he was looking at a white pony and he was all googly-eyed at them, all over the place. And then off of that race he seasoned a little, and then more so the next race, and then today when I was back at the barn he was sleeping all day, stretched right out in the stall…just crashed. The nerves are all gone, he’s just turned into a real professional.”

The last Canadian Triple Crown winner was the Michael Keogh-trained Wando, who put his name into the record books in 2003 as the 12th horse to win all three races.