Behemoth has claimed a second Group 1 1400m victory at Caulfield coming with a late flourish to claim the $500,000 Sir Rupert Clarke Stakes.

The South Australian-trained galloper broke his maiden Group 1 status taking out the weight-for-age Memsie Stakes on August 29 before returning to the Melbourne course on Saturday to claim the Sir Rupert Clarke Stakes under handicap conditions.

Carrying 60kg under Craig Williams, Behemoth was heavily supported to run the $3.80 favourite before running down the early leader Dollar For Dollar ($26) to score by a length.

Dollar For Dollar’s half-sister Pretty Brazen ($10) was close up in third place.

The victory was Williams sixth in the race while the leading jockey pointed out his father Allan was also a dual winner of the race as a jockey while also being a winning trainer.

Dollar For Dollar rolled along at an even tempo as Williams was able to bury Behemoth back on the fence to get a nice smother from the prevailing cross breeze.

When the runs started from back in the field, Williams was able to work his way from the inside out towards the centre of the track as the field turned for home.

With clear galloping room to the line, Behemoth produced the strong finish that he has become renowned for and drew clear from Dollar For Dollar, gaining the lead inside the final 100m. 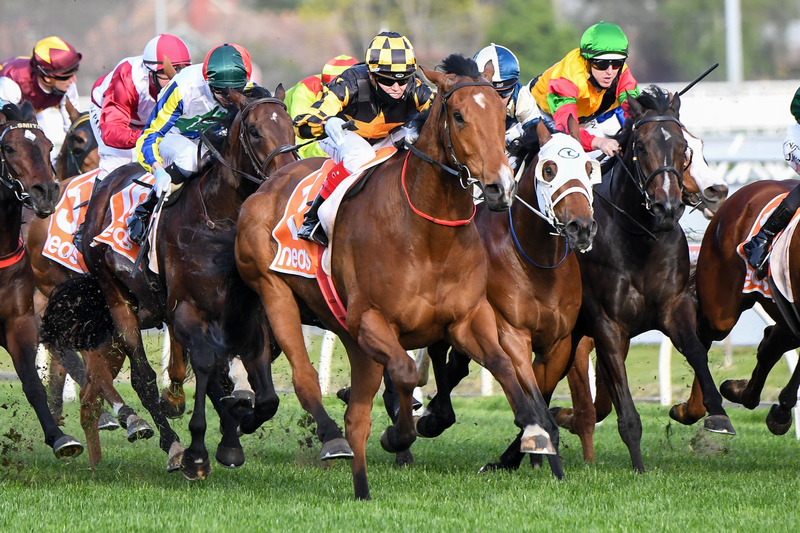 “Credit to David Jolly and his team, Sam Lyons and Grand Syndicates, they’ve just been so patient and now they’re seeing the results with this highly talented big fella,” Williams said.

“I spoke to David this morning and they were so full of confidence.

“He walked in the yard and I said to his strapper that you could get a curry comb on him and make him look a bit shiny, but his performance was excellent, he got a great run, clear running and he launched late.”

Jolly said there was a number of options for Behemoth, adding he would call on Williams to get the jockey’s feedback as he was unable to be on course at Caulfield due to COVID-19 restrictions.

“It’s a good problem to have in that we could train him to go back in distance or step up,” Jolly said.

“We decided not to be as aggressive from the gate today as we were last time because of the better barrier draw, but the 1400 (metres) is a great distance for him.

“We’ve got options, he’s versatile and we can train him accordingly.

"We got him in a good holding pattern with the three weeks between runs which was a bit of a luxury.

“He’s a dream come true to think what he’s doing at the moment. I just wish I was there but it was great watching it on the couch with the family, too.

“It’s an amazing feeling winning these races with him now.

A five-year-old by All Too Hard from the Zedrich mare Penny Banger, Behemoth was a $6000 yearling purchase.