Beauty Generation primed to bounce back as gallop impresses Moore

The world’s top-rated miler impressed his handler ahead of Sunday’s (17 November) G2 Jockey Club Mile (1600m), in which the bay will aim to regain the winning thread following a rare blip at the course and distance last month.

That first defeat in 11 starts still represented a fine effort, however. In placing two and a quarter lengths third, the Road To Rock seven-year-old lugged 14lb more than the victorious Rise High and 18lb more than runner-up Waikuku, who re-opposes at the weekend.

“We’re going into the race with very high hopes that he’ll be winning, especially given the fact that he won't be carrying a massive weight this time: he’ll only be giving them five pounds,” Moore said.

“The way he just worked - we were really pleased with that gallop. The feedback from his work rider, he was very positive and said the horse was very full of himself.” 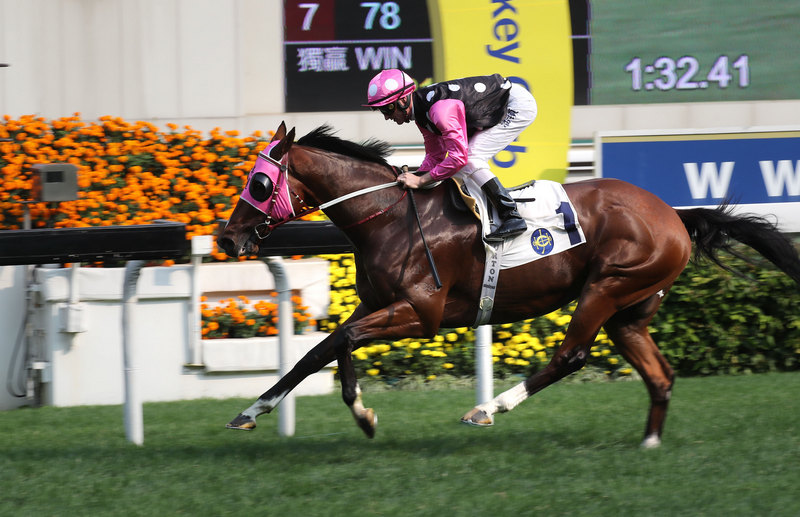 Beauty Generation sprang into stride at the 1800m starting point and galloped straight along the back under Romain Clavreul before easing down on the turn. But the Frenchman had to have his wits about him as he trotted home in front of the grandstand.

“Romain said that on a few occasions this morning ‘Beauty’ wanted to have a play with him and he had to be on his guard - he said he had to drop his leathers (stirrup straps) down in the straight because he thought he might try and throw him off!” Moore revealed.

Beauty Generation’s bullish demeanour after this morning’s fast work had echoes of the same day last year when Zac Purton guided the bouncing, head-tossing powerhouse back to the sand yard after his key workout. Following that display, the crack miler smashed Sha Tin’s 1600m track record in a remarkable display in which he hung out markedly through the Jockey Club Mile’s closing stages.

That wayward aberration was due to a foot issue and Moore reported no such ailments three days out from this final step-up race to a hoped-for third consecutive triumph in the G1 LONGINES Hong Kong Mile (1600m) on 8 December.

“He had that foot issue going into this race last year but there are no issues at all this time,” the handler said.

Last time out, Beauty Generation was unable to dictate the shape of the race with his usual destructive rhythm. Ka Ying Star took on the champ for the lead - along with Glorious Forever - prompting Purton to settle third behind that duo. The effort to pull wide on the home turn and quicken off an unsuitable tempo, combined with the epic weight concession, proved too much for the New Zealand-bred.

Hong Kong’s Horse of the Year will break from gate one in a smaller field of seven this time.

“Ka Ying Star (gate four) will probably take us on again and go to the front so I had hoped we’d draw wider and just drift across outside him, but from gate one Zac will have to see what happens from the gate and ride accordingly,” Moore said.

“If he’s pressed in the finish, if something like Waikuku can really push him in the last 200 metres, I think even the mile track record might be in jeopardy again if ground conditions prevail.”

Moore’s rising star sprinters Aethero and Thanks Forever also stepped out on the turf this morning ahead of their assignments in Sunday’s G2 Jockey Club Sprint (1200m).

“Aethero and Thanks Forever did the same as Beauty Generation: they galloped down the back and trotted back down the (home) straight. They worked well,” the trainer said.

“Neil Callan was very positive about Thanks Forever and he’ll strip a fitter horse on Sunday.

“Romain worked Aethero and he went particularly well, too. So the three of them all worked like winning chances going to those races.”