Beauty Generation showed last time out that any ‘has-been’ talk was premature but when the champ takes on Waikuku in Sunday’s G2 Chairman’s Trophy (1600m) he’ll be facing a rival who has had his measure the last four times they’ve clashed.

It’s safe to say that the weekend feature and its Group 1 follow-up, the FWD Champions Mile three weeks later, will determine Hong Kong’s champion miler title, perhaps even outright Horse of the Year Honours, two accolades that Beauty Generation has held in his grip for the past two seasons.

This time last year the New Zealand-bred was rolling with awesome force towards his eighth and ninth wins on the trot and Hong Kong’s record prize money record – he seemed invincible. Age catches up with even the most dominant of champions and the younger challenger has since closed the once wide gap, but on Sunday the John Moore-trained war horse will attempt to win the Chairman’s Trophy for a second time and prove that his last start triumph in the G1 Queen’s Silver Jubilee Cup (1400m) was not his final flourish.

“It was nice to see him bounce back and win that race last time. I think he deserved that. He’s been racing well throughout the season,” jockey Zac Purton said of the eight-time G1 winner who is two from six this term and has not finished out of the top three since he placed fifth in the 2018 Chairman’s Trophy.

Waikuku was not among the Queen’s Silver Jubilee Cup defeated. The last time he stepped into the fray was in January when he eye-balled seven-year-old Beauty Generation and went on by for a breakthrough G1 score in the Stewards’ Cup (1600m). But, despite the five-year-old’s apparent edge on his superstar foe, trainer John Size is not underestimating the threat posed by one of Hong Kong’s all-time greats. 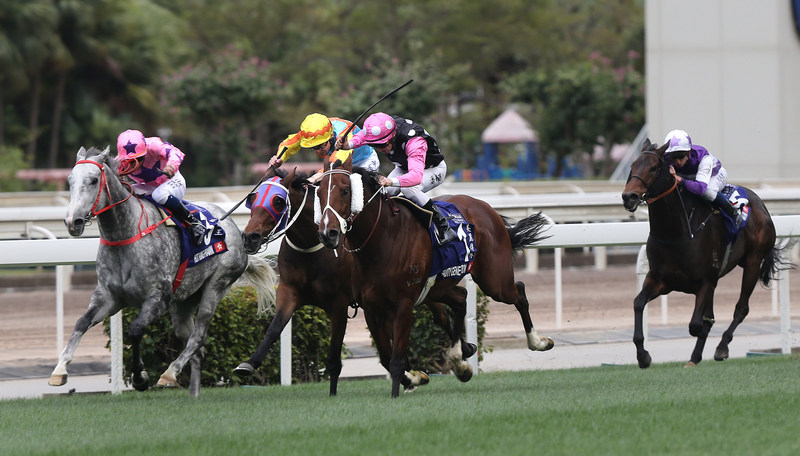 Moore is delighted with Beauty Generation’s preparation as he focuses one eye beyond the weekend towards an unprecedented third Champions Mile victory. The seven-year-old worked down the backstretch of the Sha Tin turf track on Thursday (2 April) morning under work rider Romain Clavreul and clocked 50.5s (26.5, 24.0) for 800m.

“He went down the back straight, just a half-mile on the turf to freshen up,” Moore said. “Romain said he’s jumping out of his skin and he even tried to dump him, he’s bucking and squealing, so that’s always a good sign. He’s fit and I weighed him midweek and he was 1143lb so he’s right on song.”

But Moore is mindful of Waikuku. Last year’s unlucky BMW Hong Kong Derby (2000m) runner-up has matured into a crack miler with a strong late burst; he had Beauty Generation behind him when second to Admire Mars in the G1 LONGINES Hong Kong Mile, when successful in the G2 Jockey Club Mile, and also when runner-up in the G2 Oriental Watch Sha Tin Trophy Handicap.

“Waikuku is the big danger, he’s the up-and-coming miler but he hasn’t raced in a little while so maybe he’ll just need the run with the Champions Mile in mind, but he’s drawn one and we’ve drawn six, so I’d expect he’ll get a nice sit in the box seat,” Moore said.

“In his heyday, Beauty Generation would have beaten Waikuku but we’re another year on. He’s not old but he’s getting on in age and he’s not the force he was that could just go those dominating sectionals. Now they’re starting to get closer but he’s in good order and he’s there to win.”

Size, meanwhile, is pleased with Waikuku’s preparation, having allowed him a couple of months to freshen up.

Joao Moreira holds Waikuku in high regard and the rider will attempt to notch a seventh win on the Irish import, having been in the plate for each of his previous 13 starts in Hong Kong.

“I think he could be the champion here,” the Brazilian said. “It’s very unlikely that he will be able to do what Beauty Generation has done though because Beauty Generation is an exceptional horse. But Waikuku is a horse on the way up and it’s so nice to be on a horse like this; you hope that he can just go out there and do his best.

“All he’s done so far has me extremely happy with him, I often go to the yard and look at him and he’s looking fantastic so I don't see why he wouldn't perform at his best this start.”

With rain showers forecast, the going at Sha Tin could be easier than usual but both camps seemed unconcerned by that prospect.

“There was little bit of cushion on Thursday and he loved it,” Moore said of Beauty Generation, while Moreira noted that Waikuku “has gone on a wet track before so I’m not worried about that.”