Beat The Clock will face select yet stiff competition when he attempts a second consecutive win in Sunday’s G1 Centenary Sprint Cup (1200m) but jockey Joao Moreira believes the John Size-trained speedster’s biggest threat could be a rival he knows all too well, stablemate Full Of Beauty.

Champion sprinter Beat The Clock has finished top three in all of his 23 career starts and the Brazilian ace has been in the saddle for 21 of those, including three wins at the highest level; but Moreira has also ridden Full Of Beauty on plenty of occasions, winning five times including a first-up score this season in the G3 National Day Cup (1000m), and when subsequently a short-head second to Seasons Bloom in the G2 Premier Bowl (1200m), both in October.

Last month, Moreira was aboard Beat The Clock for a big win in the G1 LONGINES Hong Kong Sprint (1200m) but Full Of Beauty’s running-on fifth was noted.

“Full Of Beauty was a bit unlucky last time,” Moreira said. “It looks like something happened in the gate, he’s done that before and he finished very close - so if he’s able to do things a little bit more proper he might be the one to beat.”

However, Beat The Clock is the mount to which Moreira retains an unwavering allegiance. The six-year-old has flourished across three seasons, the pair having combined three times at G1 level, capturing last April’s Chairman’s Sprint Prize too.

The Hinchinbrook gelding has earned connections a whopping HK$46,861,525 in the process. 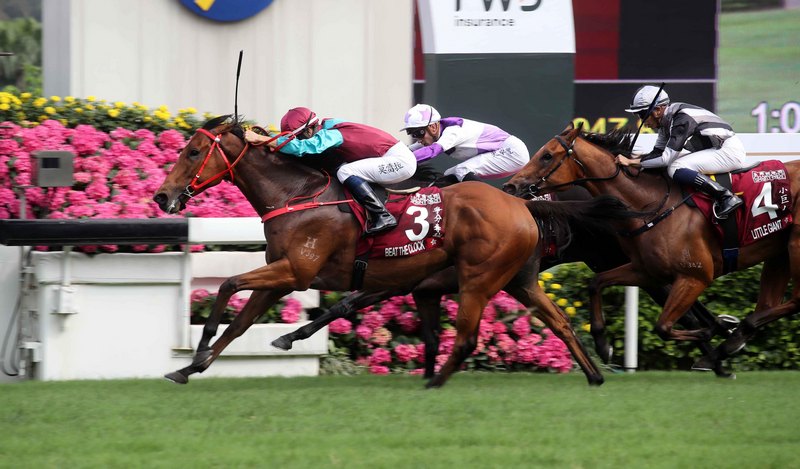 “He just doesn't like to run a bad race; he’s such a sound and nice individual,” Moreira said. “In some of the races he has placed in he could have nearly won – reasons like he was unlucky in the gate or off his splits he was not able to get there – but he is a winner and he likes to keep doing his best every time he steps out.”

Sunday’s test poses an opportunity for Beat The Clock to post his name alongside the likes of Silent Witness (2004 & 2005) and Sacred Kingdom (2010 & 2011) in becoming the sixth back-to-back victor of the Centenary Sprint Cup.

Moreira has been pleased with his galloper’s progression from last month’s International victory, pairing with the gelding in two recent barrier trials on the dirt, the latest alongside Beauty Generation over 1200m only seven days ago.

“His trial was good and I was extremely happy with the way he did it, he’s going into Sunday’s race fully fit,” he said.

Moreira’s fellow three-time champion jockey Zac Purton will take the reins on Full Of Beauty and the Australian shares his great rivals opinion.

“I don't think Full Of Beauty’s too far off them,” he said. “His runs have been solid; I think he’s just been a victim of bad gates and a bit of a slow start last time. I think with a good gate and the right run he could give them a bit of a fright.”

Purton is striking at 100% aboard Full Of Beauty after a win last February which was part of a dominant Sha Tin six-timer for the rider.

Sunday’s Centenary Sprint Cup field is dominated by Size-trained sprinters; the 11-time champion trainer will saddle four of the seven horse field, his other two charges being Hot King Prawn who returned from colic to finish second under Karis Teetan in December’s Hong Kong Sprint and D B Pin who won this race in 2018.

“He’s building up nicely, he’s had a solid grounding into the race, his last run in the Hong Kong Sprint was good, albeit a bit luckless, and he finished close to all his rivals he meets in the race on the weekend,” Shinn said.

“It’s going to be a tactical race as it’s a small field so I’m intrigued to see how he goes with the right run.”

“I’m taking him on face value - if he runs to his best he’s got good stats at the mile and he’s a proven Group 1 horse,” he said.

The seven-horse field also features Mr Stunning with Hugh Bowman aboard, Wishful Thinker with Christophe Soumillon up and Thanks Forever who gets the services of Grant van Niekerk for the first time.

Sunday’s 10-race card commences at 12.15pm with the Class 4 Helene Paragon Handicap (2000m) and also features the HK$10 million G1 Stewards’ Cup (1600m) in which Beauty Generation will attempt to defend his crown against the rising threat of Waikuku.