Be You 'bee-ing' himself and like brother on debut

Being the full brother of former top juvenile Be Bee, Be You had big shoes to fill on Saturday at Kranji, but he certainly did it in style with a brilliant win on debut - just like his big brother did three years ago.

Showing an abundance of speed, the newbie, or should we say 'new Bee', who is also owned by the Auric Stable like Be Bee, bounced straight out onto the bunny at barrier rise in the $75,000 Restricted Maiden race over 1200m.

Setting soft sectionals upfront, he never looked in any doubt of getting gunned down thereafter. 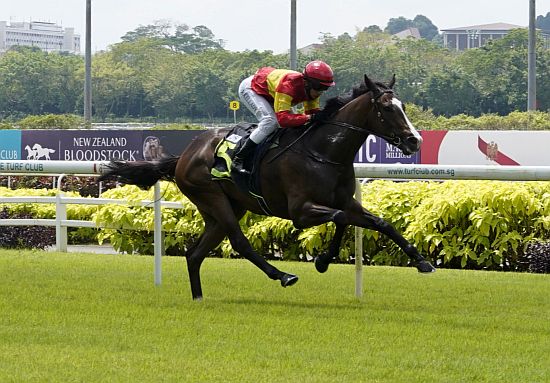 Be You (Matthew Kellady) off to a smart winning debut at Kranji on Saturday, picture Singapore Turf Club

By Showcasing out of the Fusaichi Pegasus mare My Other Woman, Be You extended nicely under Matthew Kellady’s hands-and-heels riding in the home straight to go and score by 1 ½ lengths from another newcomer Day Approach (Shafrizal Saleh) with Tiger Roar (Louis-Philippe Beuzelin) third another length away.

On looks, Be You could be the spitting image of Be Bee, with the familiar Auric red and yellow silks enhancing the impression further. The only difference might be Be You’s slightly whiter face, but otherwise, they clearly share a lot of traits, physically and talent-wise.

Baertschiger, however, made a big call by saying there could possibly be more upsides to junior.

“They’re very much alike, but I think Be You has more scope. I reckon he can go further, 1400m to a mile,” said the Australian handler.

“He’s still learning, like today, he jumped at that shadow at the 800m, but Matty had him back under control.

“He did a good job today, and here, I must also thank Vlad Duric as he worked him all the time, but couldn’t make the weight (52.5kgs) today.”

Baertschiger said Be You getting knocked down for NZ$170,000 at the Karaka yearling sale last year was not a case of Auric’s Jerry Sung begging him to buy him after the pedigree jumped out of the pages of the New Zealand Bloodstock catalogue.

“I rang Jerry two days before the sale, and he was not really interested at first,” recalled Baertschiger.

“But the next day, he called back and said he wanted to buy him!

“From Day 1, he always showed ability. He had one trial before COVID-19 and would have had his first race in April.

“We will now set him for the three-year-old races in December.”

Be You was backed down to solid $7 favouritism at his Kranji debut, presumably on account of that strong family reputation, but also his smart barrier trial form (won the last on July 30 by around four lengths).

Be Bee also made a winning start to his career in a Restricted Maiden race over 1100m in June 2017. He went on to claim the Group 2 Aushorse Golden Horseshoe (1200m) at his next start.

He mixed his form a little at his next campaigns, but did annex the Group 3 Singapore Three-Year-Old Sprint (1200m) the next season. Be Bee won three more times - once with Be You’s winning partner Kellady – with his last success coming in a Class 1 race over 1200m in January, 2019.

He did not make his presence felt at his two starts this year, before the COVID-19 three-month suspension, but has been working well on the training tracks in readiness for his comeback.