Baker keen to add to his 22 Australian Group 1's

Murray Baker and Andrew Forsman will roll out some of their highly regarded unraced three-year-old's as well as a few proven stars at Taupo on Wednesday, while they wait to finalise plans for an Australian-bound contingent.

The Cambridge trainers have accepted eight horses, including five debutantes, at the well-patronised Taupo meeting and beforehand they will have six runners in the two open trials, including The Chosen One and Quick Thinker, the stable’s main prospects in Australia.

“The Chosen One and Quick Thinker are both qualified for the Caulfield and Melbourne Cups, but, until we know what is happening with the spring carnival in Melbourne with all this COVID-19 going on over there, they’ll be going to Sydney to start with if we can finalise the travel arrangements,” Baker said.

“If they can get to Sydney and Melbourne doesn’t open up the borders at least they will have some good races to run in. There are so many good opportunities in Sydney.

“I’ve won 22 Group One races in Australia and I’d like to think I can win more. We’ll be trying, that’s for sure.

“We’re planning to have Aleisha Legg over there with the horses. This will be her 12th trip in about the last six years and she knows what to do.

“Obviously she will have to quarantine for two weeks in Sydney when she gets there and in that time Bjorn (Baker, son) can look after them as they will be at his stables.” 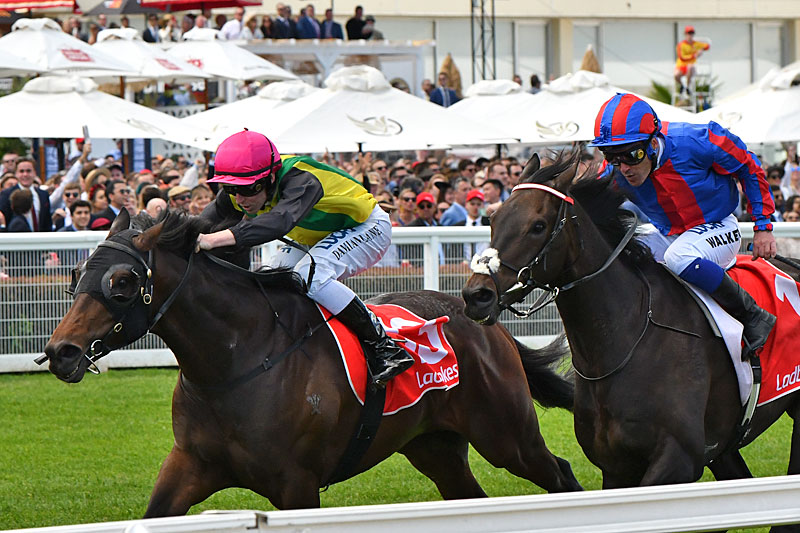 The Chosen One (NZ) and Damien Lane (pink), picture Quentinjlang.com

Baker and Forsman had hoped to also have Group One winner True Enough in Australia, but a slight setback has seen those plans scrapped.

“He got a leg infection and, though it’s not serious, it was enough to cancel the trip for him,” Baker said. “It’s a shame because he trialled up well at Te Rapa (second to Big Mike) and the winner had a big pull in the weights.

“He should be ready for the first of the weight-for-ages at Hastings (Gr.1 Tarzino Trophy, 1400m) next month. He’s nominated for all three legs (of the weight-for-age Triple Crown) down there, but I don’t think he’ll run in all of them. It’s too much travel.”

Baker and Forsman are considering also slipping the lightly tried and most promising Star Tsar into the small Sydney squad.

“I’d like to get him over there,” Baker said.

“He’s a five-year-old and only had four starts for two wins and two placings. He’s got a lot of ability and there will be a lot of opportunities for him in Sydney.”

Baker is very pleased with The Chosen One and Quick Thinker in the lead-up to their Taupo 1100m trial, in which they will clash with stablemate Aretha, while the stable will start Showbeel, Unition and Bonita Aurelia in the other heat.

“They’re both coming up well,” Baker said. “The Chosen One is that good southern breed that improves with time and we think he’s improved.

“He’s already won a Group Two and Group Three in Aussie and he’s up to winning a Group One over there.”

The Chosen One, a winner of more than $900,000 in prizemoney and last-start runner-up in the Gr.1 Sydney Cup (3200m), scored at the Te Rapa trials a couple of weeks ago and Baker expects him to run “a nice trial” on Wednesday to put him on target to have his first-up run in Sydney, possibly in the Gr.2 Chelmsford Stakes (1600m) at Randwick on September 5.

Quick Thinker has also proven himself in Australia, winning at Group One (ATC Derby,2400m), Group Two (Tulloch Stakes, 2000m) and Group Three (Ming Dynasty, 1400m) level in Sydney, and his other win was in the Listed Champagne Stakes (1600m) at Ellerslie in April last year.

“Like The Chosen One, he’s getting better with time,” Baker said.

“There are plenty of staying opportunities for him in Sydney, like the St Leger, Metropolitan, and Rosehill Gold Cup that’s worth $A500,000.”

Baker is looking forward to the race debuts of Suffused, Mind You, Aegon, Sweet Anna and Francesca at Taupo on Wednesday.

Suffused, a son of Choisir, has trialled three times for two wins and a second with his most recent performance being a decisive win over the highly regarded No Limits at Te Rapa last month, while Mind You (by So You Think) won the latest of his two trials, also on the same Te Rapa programme.

“Suffused could be a very good horse in the making,” Baker said. “He’s been showing plenty.

“Mind You goes well, too. He’s a natural galloper.”

Aegon will be the stable’s first runner on Wednesday and has also been successful at the trials, with two wins from five outings, but faces a wide draw, as does race seven acceptor Francesca, a winner of her only trial. The stable also has Telekinetic, a runner-up on debut last February, in Francesca’s race.

Baker believes Sweet Anna, who won the first of her three trials and has been placed since, could have a future over ground.

“She’s a promising staying filly. I like her,” Baker said.