Back-to-back wins for Exemplar as stablemate fails to deliver

High-profile British import South Pacific (GB) was overshadowed by his lesser fancied stable companion Exemplar (Ire) (by Galileo) for the second race running when the handsome grey 7-year-old led from start-to-finish to land the $135,000, VRC TAB Handicap (2530m) in the first race of the day staged at the Flemington meeting in Melbourne.

Narrowly defeated by Exemplar at his third outing in Australia over much the same course and distance in mid-July, South Pacific was backed as virtually unbeatable in today's staying feature but faded badly in the straight after receiving the run of the race — eventually only managing to beat one rival home.

Exemplar, on the other hand, was sent off an easy to back 6/1 chance despite his last start victory and was basically in charge of the contest from pillar to post.

Asked to set a leisurely pace by ace distance rider John Allen, Exemplar showed a decisive turn of foot entering the closing stages and never looked likely to be headed at any stage in the straight.

Double You Tee (by Written Tycoon) stayed on reasonably well over the final 600 metres to claim second, with Bertwhistle (by Al Maher) finishing third.

Speaking after the back-to-back victories of Exemplar, winning co-trainer Dave Eustace remarked: “It was great.

“I just really want to thank the team. These horses take a lot of work… These stayers; it’s a long process and to get them right is a great thrill.

“It’s great for [owner] Gerry Ryan and Tony back at the farm. They do an awful lot for the game and got a beautiful ride from Johnny.” 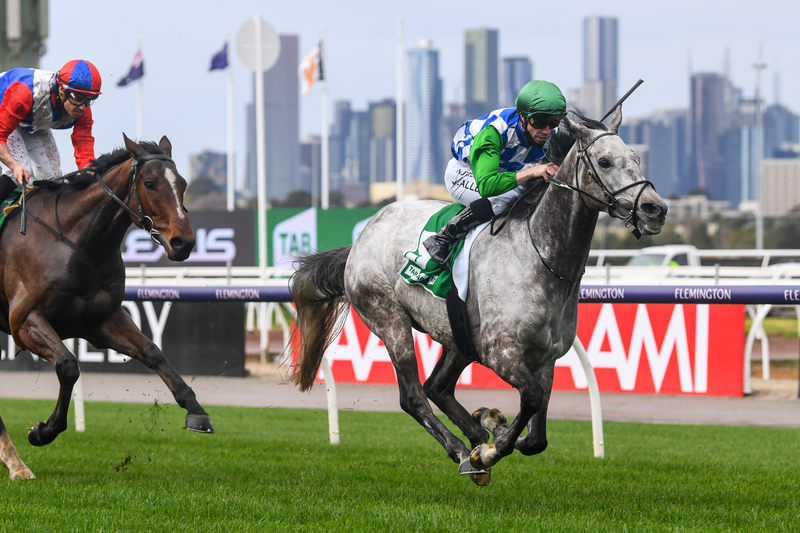 Not previously expected to be up to the standard of the black-type Melbourne Spring staying events, Eustace confirmed that a contest such as The Bart Cummings could now be on Exemplar's agenda, with a possible start in-between time.

“There’s a race back here at Flemington on the 12th [September]. Then a bit of time into The Bart Cummings. He’s a horse that’s clearly in good form. He’s very sound, he’s moving well and I’m sure we’ll have to think about the spring.”

Eustace added: “He’s been up for a while, but he hasn’t been over-raced. He was a horse that was supposed to go and win the maiden hurdle at Warrnambool, but he’s doing slightly different things now.

Asked about the rank failure of $1.95 favourite South Pacific, Eustace replied: “He changed legs just on quickening, and from then he didn’t look comfortable. That’s always a sign that things aren’t quite right.

“I’d say something will come to light. He travelled in a nice rhythm and was [then] on the wrong leg around the turn. Something’s not 100 percent there, I’d imagine.”

After another consummate distance ride, winning jockey John Allen observed: “Good effort again. I was quite confident he’d improve here from [winning] a few weeks ago — first run in a long time and got a little tired late. So he’s obviously taken the next step again. It was a good win.”

Allen suggested that races such as the Bendigo Cup and Geelong Cup could be within Exemplar's scope during the spring.