Bit Of A Lad is one of the toughest horses in one of the largest stables in the country and he proved why at Sandown on Sunday.

The Ciaron Maher and David Eustace-trained six-year-old brought up his first win of the jumps season with an eight-length romp under 70kg in the $100,000 Australian Steeplechase (3900m).

It was his first start since finishing fourth in the 5500m Grand Annual Steeplechase at Warrnambool on May 5.

“I think he ran in the first jumps last year and end up running in the last jumps of the season, so he’s a tough horse,” Maher said.

“I suppose that was the test today. He’d run in the Annual last start, come back (in distance) so we put the visor on and it’s just a great result.”

Georgethefifth, the $3.30 favourite, was under pressure early in the straight and was pulled out of the race before the last jump, while Slowpoke Rodriguez ($3.40) never looked a serious winning hope and weakened over the final 200m to finish last.

The Australian Steeplechase was the second feature steeplechase success for Bit Of A Lad, who won last year’s Brierly Steeplechase, and counts a Brendan Drechsler Hurdle among his jump wins.

The victory continued a stellar season for jumps jockey Shane Jackson, who won this year’s Grand Annual Steeplechase aboard Bit Of A Lad’s stablemate, Ablaze.

“He can be a little bit slow into gear and you can see early on in the race he was back, but he made that decision to go forward early – there didn’t look to be a lot of pace in the race – and I think that was what the winning move was,” Masher said.

Even though Bit Of A Lad has a busy season to date, Maher said his job on the features circuit was not yet done.

“He’ll just tick his way through the season,” Maher said. “I think he’s got three or four more assignments and he’ll finish off in the National and then have a well-earned rest I’d imagine.” 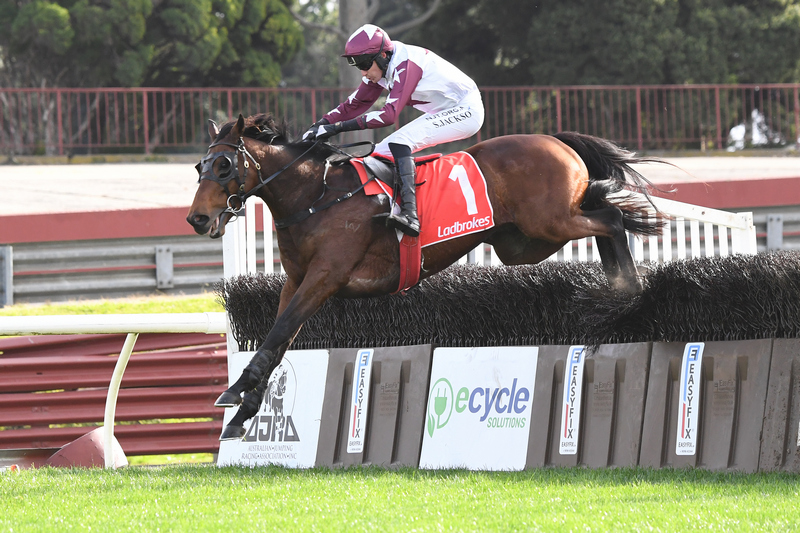 Bit Of A Lad and Shane Jackson, picture Racing Photos