Amade out to get campaign back on track

Trainer Phillip Stokes is confident he has Amade (Ire) back on track to be competitive in the Group 3 Geelong Cup. The Irish-bred, former French galloper will be lining up for his fifth start for Stokes in the 2400m handicap on Wednesday with the trainer saying the race will determine the stayer’s immediate future.

Stokes has hopes that the gelding can make the Group 1 Melbourne Cup field at Flemington on November 2, but currently Amade (Ire) is well down the list in the Order of Entry. The 8-year-old will need to win on Wednesday and get a penalty to move up the order, but that may still not be enough to get him into the Melbourne Cup field.

After a placing and a Flemington 2600m win in his first two starts for Stokes, Amade (Ire) has been comfortably beaten in his two runs this campaign. The imported gelding was given a pass mark by Stokes when eighth to Nonconformist in the Group 3 MRC Foundation Cup (2000m) at Caulfield on September 18, before being beaten more than 10 lengths when 12th to Grand Promenade (GB) in the Group 3 The Bart Cummings (2520m) at Flemington on October 2.

“He was disappointing last start,” Stokes said. “I feel his work on Friday suggests he’s working well and if he brings his best form, he can definitely be competitive.

“He did feel the track for whatever reason and was a bit jarred up after that last run, and I think we’ve rectified that. This is an important run for him going forward as we may have to reassess after this and maybe go to something easier.

“One thing for sure is the trip won’t worry him.”

Stokes said if Amade (Ire) failed to measure up to the Melbourne Cup, he may look at the Listed Sandown Cup (3200m) at Caulfield in late November and then to the Sydney Cup (3200m) next year. “He’s only had the four starts for me, and even though he’s an eight-year-old, he’s been lightly-raced and may improve with another prep under the belt,” Stokes said.

Amade (Ire) is currently a $23 chance with TAB in latest Geelong Cup betting. Tralee Rose (NZ), a last start runner-up in The Bart Cummings, is the $2.60 top elect over Hasta La War at $6.50 and Defibrillate at $7. 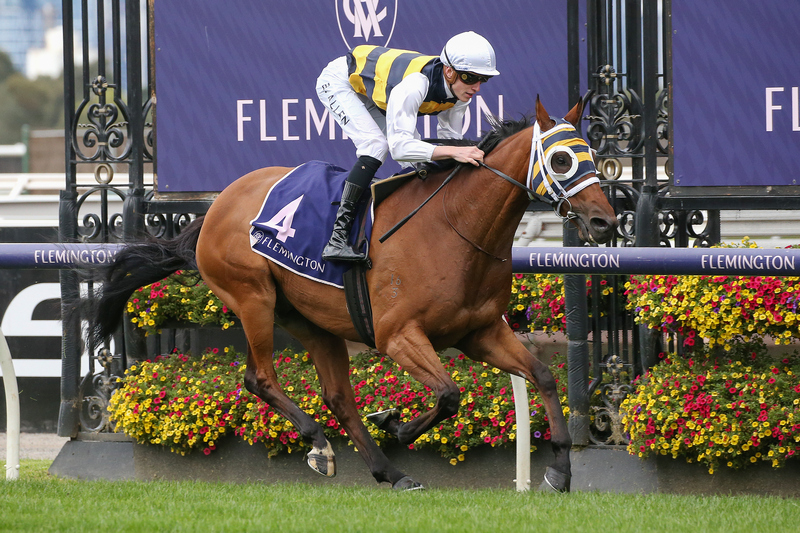 Amade (Ire) needs to win the Geelong Cup to be any chance of starting in the Melbourne Cup, picture Racing Photos