A rapidly run renewal of the $140,000, Listed, Kia Ora Stud Ortensia Stakes (1100m) at Rosehill in Sydney on Saturday played right into the hands of two ‘swoopers’ when Albumin (by Foxwedge) nudged out Surreal Step (by Sidestep) in a very close conclusion to the black-type sprint.

A contest which was a casualty of a host of scratchings from the initial 17 horse field, the Ortensia saw eight runners take their chance and the early sectionals being set by last start winner Embracer representing the Waterhouse-Bott stable.

However, no sooner had Embracer kicked for home in the straight and the contest quickly changed complexion.

Ridden back in the field off a very solid tempo, both Albumin and Surreal Step charged into the picture before fighting out the finish, with the former only just managing to do best on the post.

After claiming the early leader Embracer halfway down the straight and looking the possible winner entering the closing stages, Adelong (by Al Maher) held on for third. 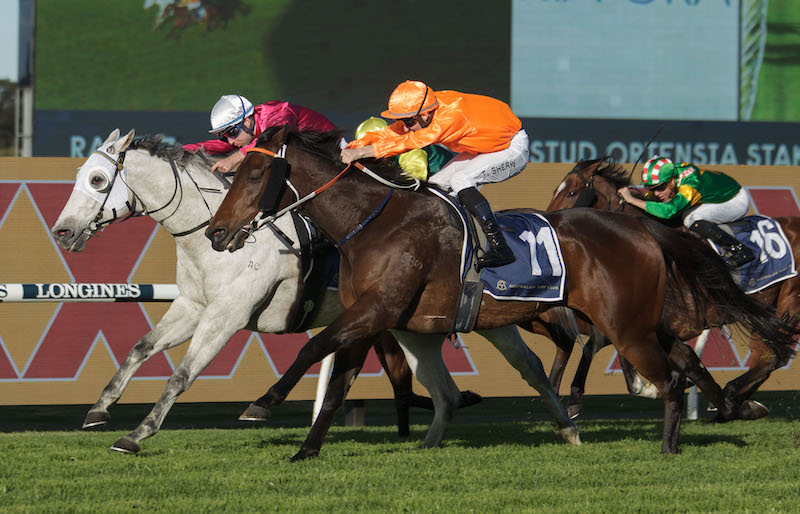 Near-white Albumin fights out the finish with Surreal Step, sportpix.com.au

The recipient of another driving Tommy Berry ride, Albumin saluted the judge for the first time since June 2019 when scoring over the same course and distance. A gelded son of Foxwedge, the 6-year-old took his earnings to $610,525 on the back of seven wins and seven placings from 38 career starts.

Runner-up Surreal Step lost nothing in defeat and looked to be ahead of the winner very soon after the winning post. A lightly-raced 4-year-old trained by Team Hawkes, the son of Sidestep was only having his second outing since early December and seems certain to be improved by the effort.

Albumin scored by a Nose, with one-and-a-quarter lengths separating Surreal Step in second and Adelong in third.

Trainers Gerald Ryan and Sterling Alexiou were all but resigned to dodging Saturday’s Rosehill meeting with Albumin until the long-term weather forecast for Melbourne changed their minds.

The six-year-old’s best form is on firm ground and with Rosehill rated a soft 7, the pair were leaning towards scratching him from the Listed Ortensia Stakes (1100m) to save him for an interstate assignment a week later. They even stopped short of booking a jockey after his regular rider Jay Ford accepted the mount on rival Adelong.

“Originally, we didn’t put a rider down when Jay couldn’t ride because all the intention was to scratch and run at Flemington next weekend down the straight,” Alexiou said.

“But the main owner lives in Melbourne and he said there is little to no possibility of it being dry down there next week, so he had to go around today.

“We brought four horses here today that probably didn’t handle wet tracks that had to go around and he’s got one on the board for us anyway.”