The Snowden trained Aim created a massive boil over in the $2m, Gold Coast Magic Millions 3YO Guineas (1400m) at the Gold Coast on Saturday with the Star Witness gelding winning for the first time since a 1200m at Randwick on December 21st 2019 with further sensation in the race of Ryan Maloney falling from the well supported Isotope.

Isotope had been backed into $2.15 on TAB fixed odds and the filly travelled well in seventh place on the rails for Maloney as the field turned for the main straight. Out wide Aim and James McDonald were very wide after leaving from barrier 15 with McDonald sending Aim forward from the 600m.

All eyes were inside as Maloney started to bring Isotope into the race, when suddenly the filly appeared to blunder at the 350m and Maloney was thrown to the turf, fortunately without injury,

The favourite was gone and then it was Aim out wide who had surged to the lead and the rest of the field were left chasing. Aim went to the line with a 1 3/4L margin over Amish Boy (Star Witness) and Hugh Bowman who had come from a similar outside barrier of 14.

Away Game (Snitzel) and Glen Boss were third, the margin 3/4L with Apache Chase fourth. Both Maloney and Isotope were not harmed from their incident. 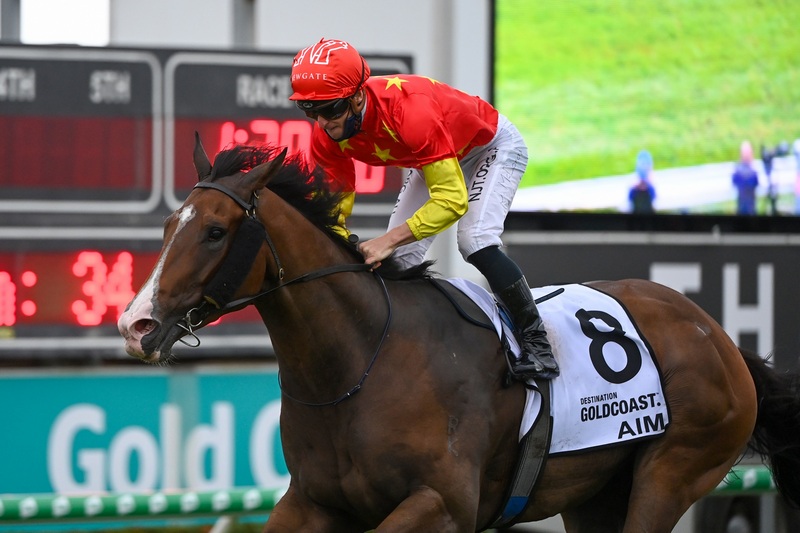 “We were pretty confident, I only wanted to get on one horse of ours coming up here and it was him,” said Paul Snowden.

“He just needed to get back on to firm going. He probably lost his way a little bit after his two-year-old season but he is back as a gelding this preparation and it is good to win one.".

“He was sold (to Hong Kong) and the money didn’t come through so it was just play on.”

“The speed was on from the start which made it a real testing 1400m but he was strong late,” said McDonald.

“This is my first ride on him, it is the first time I have ever seen him but he gave me a great feel today.”

Aim, out of the Smart Strike mare Vintage Strike, had been due to be sold to Hong Kong, however the sale was not finalised. Gelded after his two-year-old year when he was close at black type level ,but not close enough to claim a major race, Aim handsomely repaid connections with the Guineas win earning a stake of $1.16m.