A Vodacom Durban July treble for Do It Again?

Do It Again, a huge price at 11-1 for his history-making bid to win a third Vodacom Durban July, may gallop with Peninsula Handicap winner Belgarion at Summerveld on Monday as plans for Sunday’s racecourse gallop have had to be scrapped. 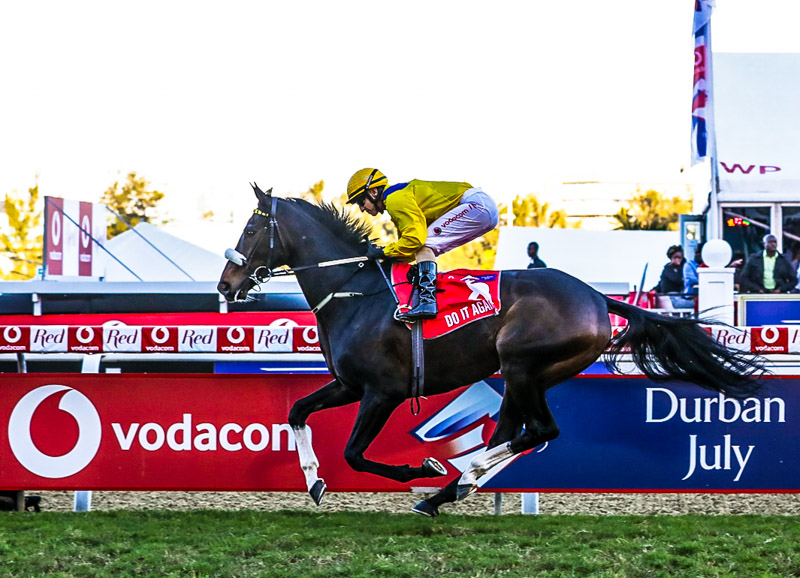 Do It Again, photo Liesl King

Justin Snaith said yesterday: “Belgarion has never been to (Hollywoodbets) Greyville and a gallop against Do It Again there would also have told punters where the latter is for the July.

“But I have been informed today that all course gallops have been cancelled. Obviously the authorities have their reasons, and I respect them, but I am hoping they will change their minds. If not, I will have to gallop the pair of them at Summerveld on Monday.”
Belgarion is 15-2 third favourite in the pre-nomination July betting with Hawwaam and Rainbow Bridge jointly heading the market at 5-1

Rainbow Bridge, beaten only four-tenths of a length in last year’s July and just half that when second to One World in the Sun Met, was entered but not declared for Sunday’s   Independent on Saturday Drill Hall Stakes.

Eric Sands said yesterday: “He galloped very well last week and I could have run him but he’d had a respiratory problem and I didn’t want to risk setting him back. He will gallop again on Monday and go for the Rising Sun Gold Challenge (June 28) and then the July.”

The five-year-old will be ridden in his KZN races by Warren Kennedy, running away with his first jockeys’ championship. Kennedy partners Rainbow Bridge’s Cape Derby winning half-brother Golden Ducat and Driving Miss Daisy for Sands in Sunday’s two Guineas races. “The distance will be a bit sharp for both horses but they have come on a lot,” said the Milnerton trainer.

The Adam Marcus-trained Vardy, winner of the L’Ormarin’s Queen’s Plate but badly hampered in the Met, is 11-10 favourite for the Drill Hall with last year’s Cape Flying Championship winner Kasimir next on 2-1.

Missisippi Burning, stable companion of Vardy and winner of the Cape Fillies Guineas, is 2-1 favourite with the sponsors for the World Sports Betting Fillies Guineas and the Snaith-trained Sachdev is 3-1 favourite for the colts’ equivalent.

Run Fox Run booked her ticket for the SA Fillies Sprint at Scottsville by proving much too good for the opposition in the Pinnacle Stakes at Kenilworth yesterday and coming away in the final furlong to beat 20-1 shot Fabian rather more easily than the half-length verdict might suggest.

Greg Cheyne, who rode her out with nothing more forceful than hands and heels, said: “She is special and absolute class. She knows what to do and when to do it. It’s a privilege to ride a horse like her.”

The Ridgemont filly’s only defeat came in the Cape Flying Championship on Met day when she was just over a length fourth to Russet Air (third yesterday)- and apparently there were excuses for that.

Brett Crawford explained: “She pulled up after the race with a snotty nose and that had to have had some type of effect on her performance. Certainly she couldn’t have been at her best.”

Cheyne won three of the eight races and the training honours went to Candice Bass-Robinson (also three) but the ride of the day was surely that of Morne Winnaar on the Glen Kotzen-trained Sockeroo in the 1 400m handicap.

He loomed up a furlong out but found his path blocked by the equine equivalent of the Berlin Wall. He switched right, right again and then a third time. On each occasion the gaps were closed as tightly as the jockeys’ face masks. With 100m to go he was still only fifth. Suddenly his prayers were answered and Winnaar grasped his opportunity as gratefully as Moses crossing the Red Sea. Even those who had backed the winner from 14-1 to 7-1 could hardly believe it.