Tarzino (NZ) - what a ride for the owners

What a ride the ownership group of Tarzino (NZ) have had with the Tavistock three-year-old colt storming, first the Group 1 Victoria Derby over 2500m at Flemington in the spring, and secondly dominating the Group 1 Rosehill Guineas over 2000m just two weeks ago. And that is before Saturday’s pinnacle of the $2m, Group 1 BMW Australian Derby (2400m).

There is much more to the ownership group’s ride than just watching the colt become potentially a duel Derby winner and earning an additional $1.2 million in stakes to add to his already considerable $1.517m gathered over his nine starts.

One aspect to keep trainer Mick Price on his toes is that his wife Caroline shares in the ownership along with himself, and as he commented back in the spring there is a sharp household interest in the performance of the trainer.

Another, sad but uplifting at the same time, aspect is that one of owners, Melissa Jurie, bought her share for her husband while he was alive, but suffering from cancer. Mrs Jurie promised her husband, who passed away before the Victorian Derby, that the horse would be a ‘Group winner of some kind’ as Price described it in the spring.

There had been offers for Tarzino from Hong Kong when his potential was evident, but Mrs Jurie did not wish to sell her share, which the other others owners respected and shortly after that Tarzino won the Victoria Derby. A Group winner indeed of the highest order.

Earlier this week Price described how others became involved in the group.

“Jim Bebedellis could not be here today (at the barrier draw) as he is out in Sydney making cappuccinos,” he said.

“His mate rang up who sells beds, and I did not even know them, and he said you have bought a horse and we raced one of the (family) stayers with Paul Cave. I reckon Paul Cave had a horse from that family and he said can we buy a share.

“I said I would get back to you and they are nice guys, he brings his Dad and they love it. I think that is fantastic for people who buy a horse and here they have a grand final event for them.

“They are always nervous I had to explain how decisions work when we change the colours. I said let’s get some black cats and walk under a few ladders, it does not matter,” he said. 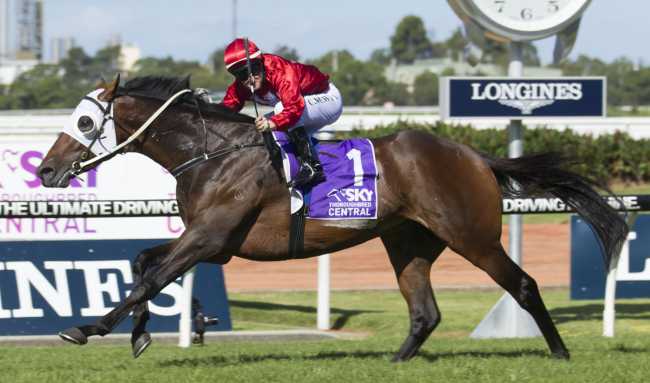 So then there is the story of why Price was having to explain to superstitious owners as to why a change of colours was not going to change the horse and his running ability.

In the Victoria Derby jockey Craig Newitt wore Price’s stable silks of navy and white halves and navy cap. However in the Rosehill Guineas Newitt had on the red and white gatecrasher silks of Victoria’s Rosemont Stud.

Rosemont’s Anthony Mithen and Nigel Austin bought into Tarzino after the Derby as Price explained.

“Mitho got included because we all sold a bit of our share down to include him in. It is like a home at stud for him in the future so I thought the opportunity was good, so did they and the price was good. So it just gave Rosemont and Nigel Austin and Mitho a bit of an opportunity and I was happy with that,” said Price

“He has to market the Rosemont brand and that is why it is important to him. Already he has some money back after the Rosehill Guineas so that was good to see,”

Rosemont Stud does not have standing rights under the buy in arrangement. If a ‘bigger offer’ as Price put it came to stand Tarzino in the future, then that was up for discussion with ownership group. In the meantime they share the ride with the colt.

Tarzino’s win in the Rosehill Guineas was emphatic and impressive. The colt won with 1 3/4L in hand without Newitt pressing him over Montaigne (NZ) and Jameka.

“Obviously I got a gauge on him in the Rosehill Guineas and nothing has gone wrong. We allowed that race to bring him on a bit, which it has, but he has had nice gallops since and this morning (Tuesday) he was good on the Kenso track and he handled that way good,” said Price.

“I have no negatives to put forward and he has had a good few days,” he added.

Price is very conscious of the feat of winning the two Derbies and the pressure it adds to the race.

“It does and I understand that, and they are never won until they are won, so I am aware of the enormity of the task, but I am happy that he is favourite, what do you put in front of him. I think Tally is a horse on the way up if he stays and D. Oliver on Jameka has got to be a bit of a chance,” he said.

“Anyway he is there to win.”