Trainer Yoshitada Munakata has echoed jockey Zac Purton’s concerns that the 2400m of Saturday’s BMW Caulfield Cup might be too short for Fame Game (JPN).

Munakata was at Werribee on Wednesday to oversee the Japanese stayer’s final gallop ahead of the $3.15 million Group 1 and admitted that although he was thrilled with the way the horse was progressing, he did have his reservations going into the race.

“The distance is a touch too short for him, I think he is better over further but that’s the distance of the Caulfield Cup and we just have to do the best we can over this distance,” Munakata said.

“It’s been five months since his last run so that is a bit of a concern of course but he will do his best and I’m sure he will run well.

“He’s in good condition and I’m very happy with him. Since it was his last gallop before the Caulfield Cup, he had a reasonably strong gallop. He worked home over five furlongs and it was a very nice gallop.” 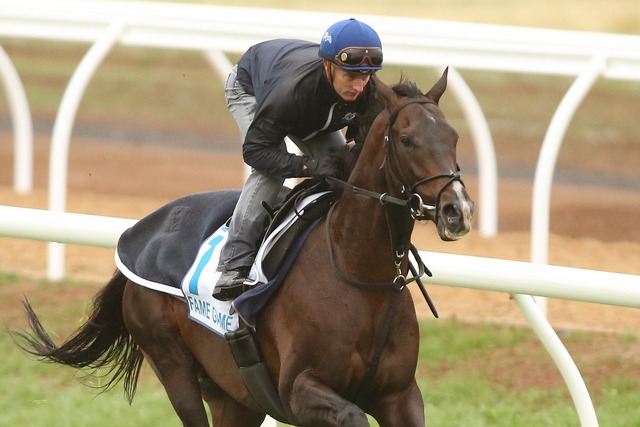 Fame Game hasn’t raced since finishing runner-up behind star galloper Gold Ship in the Group 1 Tenno Sho (3200m) at Kyoto in May.

Set to carry 57kg in Saturday’s Caulfield Cup, he is currently rated a $10 chance with CrownBet.

A horse that usually races in the second-half of the field, Munakata said they wouldn’t be changing his pattern after the six-year-old drew the inside barrier.

“It’s obviously better than drawing the outside gate and it is the shortest way home so we’ll just ride him the way that he feels,” he said.

Fellow Japanese stayer Hokko Brave (JPN) also rounded out his Caulfield Cup preparations at Werribee on Wednesday, with the eight-year-old rated a $15 chance after drawing barrier 19.