Third placegetter in the VRC Victoria Derby last November, Thunder Fantasy, has stamped himself a contender for the top autumn prizes with a strong first-up win in the $220,000, Group 2 Hyland Colours Autumn Stakes (1400m) at Caulfield on Saturday.

Thunder Fantasy was twice a winner early last campaign as well before stepping out over longer trips and showing his best form when third in the Derby to Polanski.

Polanski was a warm favourite for the Autumn Stakes but had to be scratched on race morning after reportedly breaking out with hives.

Thunder Fantasy was send off an $8 chance by punters with Rock Hero, twice a victor over Thunder Fantasy in the spring, replacing Polanski at the head of markets.

Rock Hero and Michael Rodd took it up as they turned for home but Thunder Fantasy with Mark Zara was soon breathing down his neck and pulled away to win it convincingly in the end with the margin 1 3/4L.

Rock Head (Fastnet Rock) and Rodd were second ahead of Late Charge (Hard Spun) and Vlad Duric, the margin a short neck. 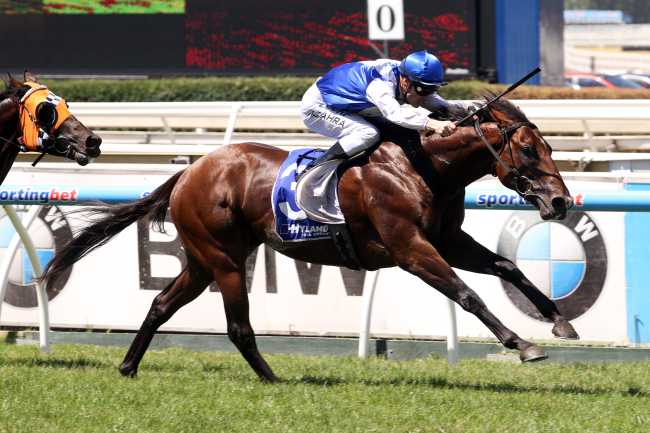 Dan Williams, on hand for the Anthony Cummings yard, pointed to big targets for Thunder Fantasy.

"We were pretty confident to be honest," said Williams.

"He's been pretty sharp over these shorter distances. I'm really happy with how he relaxed in the run and he showed a good turn of foot.

"He's in the Australian Guineas and he is in the [Australian] Cup as well."

Thunder Fantasy, a colt by Lucky Owners out of the Galileo mare Pink Pier, has now won three times from eight races and with the Derby third place he has earned stakes of $294,400 for owner Mr K M Chiu.