He may have been the smallest horse in the Group 1 $500,000 Raffles Cup over 1800m on Sunday but Flax showed he is a galloper full of heart with his comfortable victory in the Second leg of the Triple Crown Series.

Up on the speed throughout, Flax, ridden by Jose Verenzuela, careered away to score by three-and-a-quarter lengths from Deep Pockets (Joao Moreira) with Zac Influence (John Powell) four-and-three-quarter lengths away third.

Flax recorded a winning time of 1 min 50.03 secs on the soft rated track. 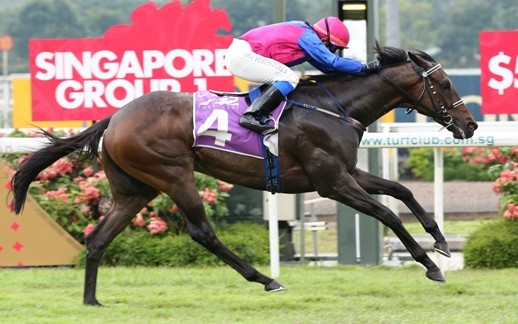 Verenzuela had Flax out of the barriers quickly and he was content to sit up on the outside of the leader Keep Way (Alan Munro) on settling down.

In a line behind the pair were Arowana Dot Com (Saifudin Ismail), Clint (Mark Gallagher – out very wide), Lizarre (Saimee Jumaat) and What Now (Barend Vorster) back on the fence.

Verenzuela allowed Flax to stroll to the front on straightening for home and the South African-bred gelding quickly opened up a winning break on the opposition.

Out of the pack emerged Deep Pockets who tried valiantly to run down Flax but it was to no avail as Verenzuela kept an eye on the infield screen and knew he had the race well within his keeping.

Zac Influence ran home gamely out wide on the track to cut Lizarre out of third place on the line.

Flax, who had finished third behind Chinchon in the International Group 1 Singapore Airlines International Cup over 2000m in May, appreciated the soft conditions in landing his first Group 1 success.

The diminutive gelding, who weighed-in at just 428kg for Sunday’s race, will be entered for the Group 1 $1.35 million Longines Singapore Gold Cup over 2200m on November 11 but is unlikely to line-up in the race.

“I’ll see how he is and will probably enter him for the Gold Cup just to see what sort of weight he will get,” said victorious trainer David Hill.

“He’ll be giving away quite a bit of weight to his rivals and I don’t think that will be fair to him. He’s a class horse and we’ll keep him ticking over and look to the SIA Cup with him next year.

“He appreciated getting out to this distance today and the little bit of cut in the track was also a plus for him.

“Jose said he thought he was going to win last time (when fourth in the Kranji Mile on October 7) but he just felt the ground was a bit too firm.

“He’s progressed nicely from that race into this race and I just wish he had a bit more condition on him.”

Hill praised the work his daughter Sammy does in preparing Flax for his races as the gelding has collapsed twice previously at the conclusion of his races.

“Sammy does all the work with this horse,” said Hill. “She’s got him nice and relaxed and has a very good understanding of him. She deserves a lot of the credit.”

The win of Flax gave Verenzuela his first Group 1 success in Singapore.

“I just love this horse, right from the first time I had the ride on him,” said Verenzuela.

“He’s a horse that just keeps going. He was up to his right distance and he loved the cut in the ground.

“It’s a great thrill to be associated with a horse like this. He was so well prepared for the race and I have to thank Dennis and Gael Evans for giving me the confidence with this horse.”

As has been the practice for Flax following his races, Verenzuela dismounted from the gelding at the turn out of the straight whereby he can be taken straight back to a cooling room to recover from his race.

“He hasn’t been a problem at all after his races of late,” said Verenzuela. “I just take my time coming back on him and let him recover.”

Winning owner Dennis Evans praised the work that Hill and his daughter have put into Flax, not only in getting him to victory in the Group 1 race but also in just getting him to the racetrack.

“The race looked pretty much a shoe in on paper but we know in racing that not everything is not a shoe in,” said Evans.

“We are naturally very happy to win this race but I have to thank David and Sammy for all their work they have done with this horse.

“They have done a great job in not only getting this horse to the racetrack let alone winning a Group 1 race.

“I also have to thank the veterinary services here at the Singapore Turf Club for the provisions they have in place for this horse after his races.

“It’s a great thrill to win a race of this stature.”

A six-year-old by Silvano from the Elliodor mare Bejewelled Spring, Flax was having just his 11th race start on Sunday and registered his sixth victory on top of two minor placings and prizemoney in excess of $800,000 for Newbury Racing.