Black Caviar's sire one of the great sale bargains

Overlooked in many discussions on great thoroughbred sale bargains of recent years is Bel Esprit, the sire of Black Caviar, the 3-year-old filly who suggested she is poised to be the sprint queen of the autumn when she retained her unbeaten record in recording a dominant win in the $202,000 Group 2 Australia Stakes at Moonee Valley on Friday night. 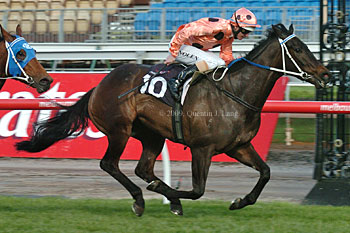 One of the first horses bred by Hunter Valley construction engineer Phil Gunter, resident owner with wife Leonie of the Llanilo Park stud near Coolmore at Jerrys Plains, Bel Esprit had unsightly front legs as a youngster and realised only $9,000 when sold to Macedon Lodge, Victoria through Baerami Thoroughbreds at the 2001 Inglis Sydney Classic yearling sale.

Now rejuvenating the iron constitution transmitting Njinsky male line as a sire at Lee Fleming’s Victorian breeding giant Eliza Park, this son of Coolmore’s world wide successful sire Royal Academy and the Vain mare Bespoken went on to be one of the best juveniles and 3-year-olds (accoladed a champion) of his generation.

They were the only years he competed and his 19 starts saw him finish in the first two in 12 stakes, including eight wins. He excited the nation when he won the first five of his six appearances at two, including the VRC Maribynong Plate (by four lengths) and the MRC Blue Diamond Preview (by 4.5 lengths) and Blue Diamond Stakes, before ending the campaign with a fifth as favourite in the Golden Slipper.

Although Slipper glory eluded Bel Esprit, his appearances at two suggested he was worthy of consideration on merit with his mercurial maternal grandsire Vain, one of the most brilliant horses bred in Victoria.

In earning $2 million, Bel Esprit went on to pick up five Group 1 cheques at three, a win in the Doomben 10,000 (1.3 lengths) and seconds in the VRC Newmarket, MRC Caulfield Guineas and Dubai Cup and MVRC Manikato Stakes.

Retired to stud in 2003 and now represented by four crops including current 2-year-olds, Bel Esprit has nearly 140 winners on the board, comprised by runners in Australia, New Zealand, Hong Kong, Macau, Singapore and South Africa.

He has supplied eight stakes winners, a score that is likely to improve dramatically in the near future following improved respect from quality breeders and stables. He is one of Australia’s busiest sires with each of his books for 2007 and 2009 being in excess of 250.

A son of the late eminent NSW breeder Jim Fleming (Tyreel stud) and a member of the ‘Flemings are Fabulous’ food store dynasty, Eliza Park stud founder and owner Lee Fleming has three good reasons to be joyous at the emergence of the Peter Moody trained unbeaten Black Caviar as a budding champion.

Successful in five Melbourne races, including four stakes, she is not only by Bel Esprit but her unraced dam Helsinge is half-sister by the Eliza Park sire Desert Sun (started off in New Zealand and supplied two times Australian Horse of the Year Sunline) to crack Flying Spur sprinter Magnus (won AJC Galaxy, second VRC Newmarket, Lightning Stakes, MRC Oakleigh Plate). Magnus is also on the Eliza Park sire strength, commencing his career in 2008 with116 mares and following with165 in 2009.

On the remorse side, Lee Fleming got rid of Black Caviar’s dam Helsinge, a mare he owned with R. Crabtree, before she went to stud. Now owned in Victoria by R. Jamieson, she went on to produce, however, two Bel Esprits as her first two foals, in order Black Caviar and her yet to be tested juvenile brother Moshe. Both Black Caviar ($210,000) and Moshe ($75,000) were sold through Adam Sangster’s Swettenham Stud, Nagambie consignments at the Inglis Melbourne Premier yearling sales.

She was one of 11 winners from the 12 foals produced by the unraced Vain mare Song of Norway. She was from Love Song, a mare of English ancestory but a product of the modest Denmark breeding industry. Like the dam of Kingston Town, Love Song was imported to Australia by Melbourne businessman David Hains.