On balance, and using all the evidence now available to us, it is probably safe to say Battaash handles York.

Prior to his third tilt at the Coolmore Nunthorpe Stakes on Friday there had been understandable doubts, so much so trainer Charlie Hills considered swerving the Knavesmire mission.

Thankfully, his combustible gelding came and he conquered, producing a sensational display that lowered the track record set by Dayjur in the same Group 1 showpiece 29 years earlier. 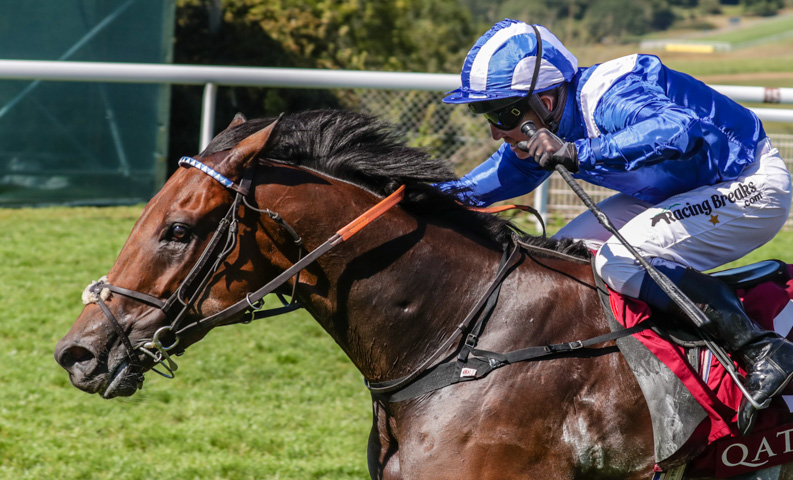 Dayjur became one of the sport's all-time great sprinters for Hamdan Al Maktoum, whose latest speed sensation may not yet have achieved the ratings of that star of old but does now hold the fastest ever time for York's five furlongs, having stopped the clock in 55.90 seconds, 0.26sec quicker than Dayjur.

He did that after destroying the Nunthorpe field with a surge just over two furlongs out that helped him and Jim Crowley to a three-and-three-quarter-length defeat of Soldier's Call. The Aidan O'Brien-trained outsider So Perfect took third but Ballydoyle's 13-8 favourite Ten Sovereigns was made to look slow relative to Battaash and managed only sixth.

"He loves York now, doesn't he?" said Hills, whose stable star had performed way below his best when fourth in the previous two Nunthorpes.

"To lower Dayjur's record is pretty amazing. I thought there would never be a faster horse than him but there obviously is now. Willie Carson said he thought this could be the next Dayjur and he was right. He's a superstar. He's always shown a great level of ability but now he's putting it all together.

"I was half thinking, 'let's miss this race and go straight to Ireland on Champions Weekend'. This is a difficult track and not all horses handle it. Having finished fourth on both his starts here the question of whether we should come back obviously did cross my mind, but Sheikh Hamdan said: 'No, I will be at York. I won't be in Ireland.' Today was fantastic. I'm chuffed."

Hills was chuffed and Battaash was quick, hitting a peak of 47.28 miles per hour. He will now seek to use that pace at the Curragh next month and then in the Prix de l'Abbaye, which yielded his only previous Group 1 success in 2017.

"He is so fast it's ridiculous," said Hills. "It's a case of getting the sectionals right and using his speed at the right moment. It's hard to ask a sprinter to sprint. It's the worst thing you can do. It's all about balance and getting the horse on a nice even keel.

"We do want him to be here in two and three years' time, so we don't want to be too greedy, but as he's in such good form this year I think we could still go to Ireland next, then the Abbaye and then the Breeders' Cup Turf Sprint."

Talk of the Breeders' Cup inevitably triggered talk of Dayjur's famous 1990 defeat at Belmont Park, where he would have triumphed on dirt but for jumping a shadow close to the winning line.

"Dayjur was more genuine and straightforward than this horse," said Sheikh Hamdan, who pointed to his head when adding: "Battaash is sometimes a little bit...

"The first time he came here he got mad and then next time he had a problem with his throat, so we gave him an operation and since then he has run well."

But will he be allowed to run at Santa Anita?

"Maybe," said Sheikh Hamdan, who believes sprinters prefer to gallop in a straight line, as opposed to around a bend. "He'll have had a long season by then because he started racing in May. We'll see how he is after the Abbaye."

It was then pointed out to the winning owner that the winning trainer is extremely keen to run in America.

"I know he is keen," said Sheikh Hamdan. "Trainers are always keen."

Indisputably true is that Crowley is keen on Battaash.

"I have never before had a buzz off a horse like that," he said. "When I woke up this morning I was excited about it and I was still excited driving to the track.

"When I asked him to go he finished off the race immediately. He was going so quickly I knew it would need a horse from another planet to come by him in the last furlong. It was unbelievable, my best winner ever. It's a real pleasure to be associated with him."

Then, reflecting on the Nunthorpe defeats in 2017 and 2018, Crowley became philosophical, and observed: "If at first you don't succeed, try, try and try again."

On a glorious afternoon when York's turf was scorched, Battaash did indeed try again. By doing so, he consigned a hoodoo firmly to the past.

Blink and you'll miss him!

BATTAASH shows his devastating turn of foot to win the @coolmorestud Nunthorpe Stakes, breaking the track record in the process! 😮#ClassicEbor pic.twitter.com/lLL9p6vtf9