Perth star Scales Of Justice made a triumphant return to racing on Friday night but celebrations were short-lived after one of the Group 2 Australia Stakes (1200m) contenders at The Valley, Manuel, had to be euthanised following a late fall in the race.

Manuel, who was ridden by Barend Vorster, lost his footing inside the final 100 metres of the race when angling for a run and he crashed heavily to the ground, breaking a leg.

Vorster was sitting up moments after the fall and was later seen gingerly walking with medical officers to be examined.

He was taken to hospital with a suspected collarbone injury, which forced a delay in the running of the final race.

The death of last year’s Orr Stakes winner cast a sombre pale across the meeting and certainly affected a number of connections and members of the Tony and Calvin McEvoy stable, who only moments earlier were cheering on race favourite Hey Doc as he tried to led throughout.

Hey Doc was run down late but showed he has returned well from a short spell following his Winterbottom Stakes win in Perth. He is on the path to the $2.9 million group 1 Al Quoz Sprint at Meydan on March 28.

As for Scales Of Justice, he will next attempt to add another 1400-metre Group 1 Caulfield race to his regime with the Memsie Stakes winner likely to aim up next at the Orr Stakes in two weeks.

Three-year-old colt Microphone ($4.80) took a sit in the race but failed to threaten late and was beaten 2.7 lengths into sixth spot.

Sir Rupert Clarke Stakes winner Begood Toya Mother ($6) also took a sit off the pace and after looming before the home turn, he faded to finish seventh, some 4.5 lengths from the winner. 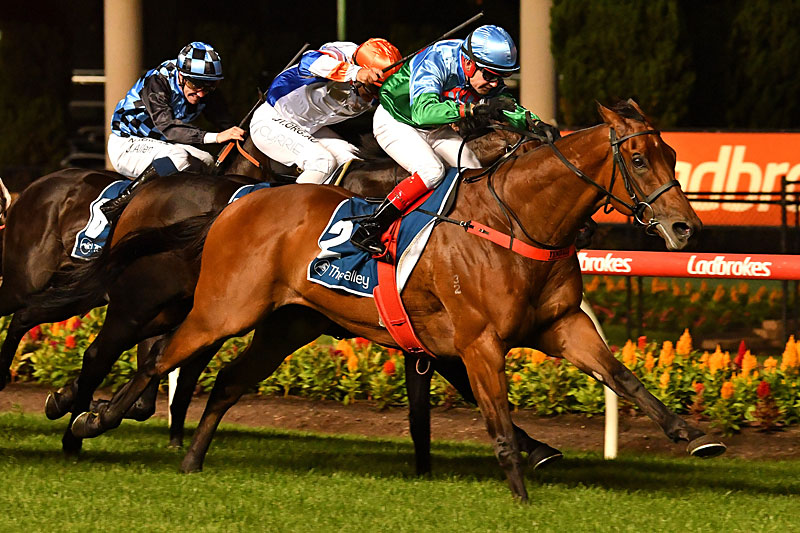