World class sport and incredible global growth underpinned a memorable 2017/18 racing season in Hong Kong, which concluded on Sunday with overall turnover of HK$124.2 billion, representing a 5.8% increase on the previous season.

A crowd of 31,903 turned out at Sha Tin for this afternoon’s season finale and enjoyed the exciting conclusion to a fascinating battle for the champion jockey title. Zac Purton sealed the premiership with his win on Rise High in the Class 1 Sha Tin Mile Trophy Handicap (1600m), holding off defending champion Joao Moreira, who rode a treble. The day’s turnover came in at HK$1.938 billion, the highest ever for an 11-race card, while commingling for the day set a record at HK$335 million.

Mr. Winfried Engelbrecht-Bresges, Chief Executive Officer at the Hong Kong Jockey Club, said: “We are delighted with another record season, one of our most exciting seasons both on and off the track. That excitement reached a thrilling climax this afternoon, with Zac Purton holding off Joao Moreira’s final push to win the jockeys’ championship. As well as great sport today, we also had record turnover for an 11-race meeting, despite receiving 35 millimetres of rain, and that shows the enthusiasm for our product.

“It is extremely competitive and exciting; we have world-class jockeys from right across the globe, world-class trainers, horses sourced from all over the world. We deliver the most international racing product, and, in terms of excitement, I don’t think any racing jurisdiction can match us on a race-by-race basis.

The CEO emphasised the Club’s strong financial position: “Our total gross margin of HK$5.48 billion is an increase of 6.3 percent. Our contribution as Hong Kong’s biggest taxpayer once again topped HK$13 billion for the second time, demonstrating the importance of racing to the Hong Kong community.”

Much of the growth across the season was due to the Hong Kong Jockey Club’s strategic positioning as a global commingling hub. The total amount wagered with commingling partners reached HK$16.5 billion; a massive increase of 154.8% on last season’s HK$6.5 billion.

Mr. Engelbrecht-Bresges said: “Commingling is quickly changing the global landscape and that is seen in the fact that it made up 13.3 percent of our season’s turnover this year compared to 5.5 percent last year. Today, we reached a new record of HK$335 million for a single race meeting, a truly extraordinary mark. It is now a significant driver to Hong Kong’s turnover and that is due to the ever-increasing international interest in our racing product, which is proving to be attractive as an exciting sports option founded upon the highest integrity.”

Also noted was the increase in simulcast turnover, with Hong Kong bettors wagering HK$3.94 billion on races from abroad, an increase of 12% on the previous season.

He said: “This trend comes at a time when our customers are showing a greater appreciation for international racing. The time is right for us to launch our World Pool concept, beginning with Royal Ascot next year, which will offer a strong value proposition to customers in the UK and Hong Kong, and further strengthen our position as the international hub of commingling.” 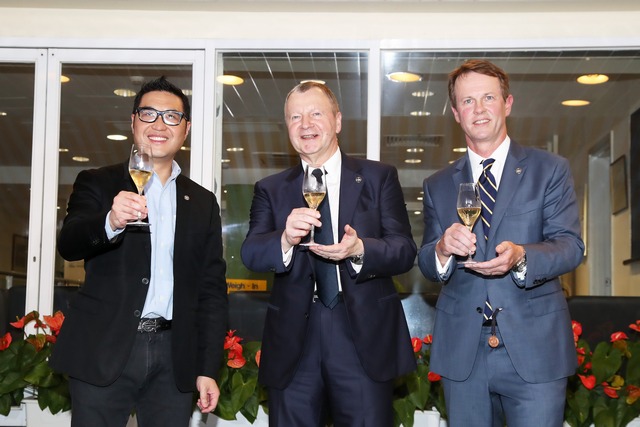 The CEO noted that there had been many spectacular moments during the 2017/18 season, with Beauty Generation taking honours as Hong Kong’s Horse of the Year in an open season.

“The Horse of the Year this time was a very tough competition and you could make a case for a number of horses,” Mr Engelbrecht-Bresges said. “This demonstrates how competitive Hong Kong racing is and, in Beauty Generation, we have a creditable winner. We saw exciting performances from the likes of Pakistan Star, Time Warp, Ivictory, Mr Stunning and Ping Hai Star, and Highland Reel’s performance in winning a second LONGINES Hong Kong Vase to end his career was a truly memorable moment. As for next season, we have some very good four-year-olds coming through the grades and I think we will see plenty from them.”

He also highlighted the calibre of Hong Kong’s horsemen, particularly champion trainer John Size, who won a 10th championship this season, and jockeys Purton and Moreira.
“I firmly believe that, in John Size, we have one of the best trainers in the world,” he said. “As for the jockeys, we had one of the most exciting fights for the championship in a very long time. I think it was a terrific competition between Zac and Joao, and it is this competitiveness which has driven both to excel.

“I would like to wish Joao all the best in his future endeavours in Japan. I’m sure that he will miss Hong Kong and his battles with Zac, but all the best for him as he follows his dream. Now, we have a new champion and we cannot measure how competitive Zac is. His performance in the closing stages of the season has been terrific and he is a worthy champion.”

The CEO also expressed his satisfaction at the Hong Kong system producing such local talent as jockey Derek Leung, winner of the Tony Cruz Award for the second consecutive year, and trainer Frankie Lor, runner-up in the championship in his freshman season.

Mr. Engelbrecht-Bresges said that Hong Kong’s feature meetings, the LONGINES Hong Kong International Races in December and Champions Day in April, will continue to grow in the season ahead, which will offer overall prize money of HK$1.22 billion across its 88 race meetings, an increase of 5% on this term.

“The LONGINES Hong Kong International Races continues to be one of the highlights on the world racing calendar and we are making further steps to ensure it remains the Turf World Championships,” he said. “We have raised the LONGINES Hong Kong International Races purse to a combined HK$93 million, which is a 10 percent increase.

“We are also very excited by the emergence of Champions Day, which proved a great success with our Champion Sprinter (Ivictory), Champion Miler (Beauty Generation) and Champion Stayer (Pakistan Star) winning the three feature races. We will further expand this by announcing a new sponsor soon.”

Looking ahead, Mr. Engelbrecht-Bresges is excited for the opportunities afforded by the opening of Conghua Training Centre. The integration of CTC into the Hong Kong system occurred last Thursday (12 July), when the first in-training horses arrived at the site on the Chinese Mainland.

“Conghua Training Centre is one of the biggest investments the Club has ever made,” he said. “The comments from top-class horsemen who have visited the site – from Michael Kinane, who visited a couple of months ago, to Derek Leung and Douglas Whyte, who rode work there on Friday – they are all very positive. Michael said it was one of the best centres he has ever seen, while Derek and Douglas appreciate what this means for the future of Hong Kong racing.

“With horses now heading up to Conghua, we can begin to invest in our Hong Kong training facilities, with HK$1.5 billion earmarked to upgrade the stables here at Sha Tin. This is in line with our long-term commitment to improving Hong Kong racing.”

Mr. Engelbrecht-Bresges thanked the Club’s Owners, Members, race fans, the racing media and the Club’s staff for their continued support.