Maximum Security makes his first start since being disqualified from victory in the Kentucky Derby when he lines up for Sunday's $150,000 TVG Pegasus Stakes at Monmouth Park.

With Maximum Security in the field and no clear leader in the 3-year-old division, the Pegasus competes for weekend attention with Saturday evening's "Downs After Dark" program at Churchill Downs, a card with five graded stakes, two of them Breeders' Cup "Win and You're In" events.

On the international scene, the feature is Sunday's Group 1 Prix Diane Longines at Chantilly, 2,100 meters for 3-year-old fillies.

Here's how it shapes up:

Trainer Jason Servis hemmed and hawed before giving Maximum Security the go-ahead for Sunday's Pegasus. The colt's blood work came back clean at midweek and Servis on Thursday finally acknowledged he "might have been over-reading things a little too much, trying to be overly cautious." He told Daily Racing Form, "He's going to run. The horse had a really good day today and I don't see a reason why we shouldn't run."

Servis has set the Grade I Haskell Invitational at Monouth July 20 as a second target for Maximum Security. After that, it's the Grade I Travers at Saratoga on Aug. 24, the "Midsummer Derby," where he once again would clash with many of the other claimants to divisional honors.

Maximum Security drew gate No. 2 in a field of six and was installed as the 1-2 favorite on the morning line for the Pegasus.

While the rest of the 3-year-olds watch Maximum Security at Monmouth, older horses will duke it out at Churchill Downs.

Gift Box, a 6-year-old son of Twirling Candy, jumped into graded stakes company in California in December after toiling in the allowance ranks on the East Coast. He won the Grade II San Antonio on Boxing Day at Santa Anita, followed that with the win over McKinzie in the Big Cap and finished second May 27 in the Grade I Gold Cup at Santa Anita.

Yoshida makes his return following a sixth-place finish in the Dubai World Cup. Seeking the Soul was eighth in Dubai and comes off an intervening third in the Grade II Alysheba over the Churchill Downs strip. Quip, winner of four of his eight starts, has not run since the Oaklawn triumph April 13 and faces tougher opposition here.

On the same nighttime program as the Stephen Foster, the $150,000 Grade III Matt Winn Stakes is for 3-year-olds at 1 1/16 miles on the dirt. The seven-horse field includes several refugees from the Triple Crown trail -- Limonite, Signalman, Nolo Contesto, Knicks Go and Mr. Money. Mr. Money is the 2-1 favorite after winning the Grade III Pat Day Mile on Derby Day in his most recent start.

Things haven't been breaking Bob Baffert's way of late and the silver-haired trainer will try to fix that by saddling three of the six 3-year-olds entered for Sunday's $100,000 Grade III Affirmed at Santa Anita. They drew the three outside gates -- California Derby winner Kingly in No. 4, Santa Anita Derby winner Roadster in No. 5 and three-time graded stakes winner Mucho Gusto on the outside. Mike Smith rides Roadster. The others: Visitant was second in the California Derby but makes his first start on real dirt; Manhattan Up was second to Mucho Gusto in the Lazaro Barrera Stakes in his last start; and Always Forgiven is a recent maiden winner. 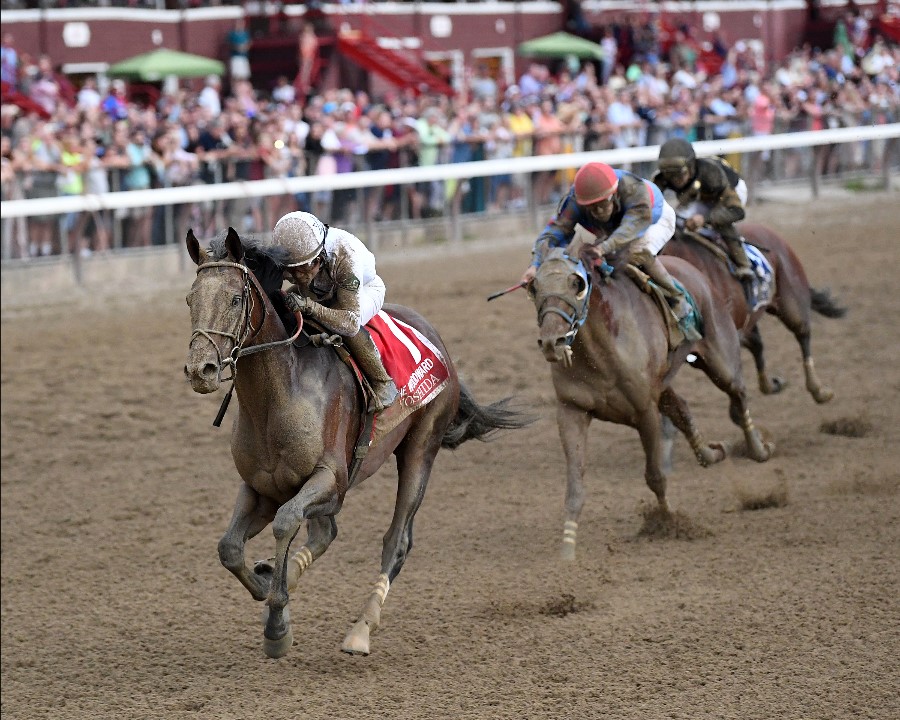 Yoshida, seen winning the 2018 Woodward Stakes, is among the favorites for Saturday's Grade I Stephen Foster at Churchill Downs, a "Win and You're In" race for the Breeders' Cup Classic, picture Chelsea Durand, courtesy New York Racing Association

Saturday's $250,000 Grade II Fleur de Lis at Churchill Downs, a "Win and You're In" for the Breeders' Cup Distaff, drew a field of six with half of those looking like serious contenders. Elate is the 8-5 favorite on the line after finishing second in the Grade II Azeri and third in the Grade I Apple Blossom, both at Oaklawn Park and both won by Midnight Bisou. She's a Julie is 2-for-2 this year, winning the Grade III Bayakoa at Oaklawn and the Grade I La Troienne at Churchill Downs. And Blue Prize, fourth in last year's Breeders' Cup Distaff, was fourth in the La Troienne in her first outing of 2019. Blue Prize won last year's Fleur de Lis.

Winter Sunset heads a field of 3-year-old fillies set for Saturday night's $150,000 Grade III Regret Stakes at Churchill Downs. The Tapit filly has two wins and two thirds from four starts, the thirds both in Grade III events. The other 10 range from Breeders' Cup competitors to recent maiden winners.

Another Broad and Goodonehoney are virtual co-favorites in a field of six for Saturday's $100,000 Obeah Stakes at Delaware Park. The 1 1/8-miles Obeah is the local prep for the $750,000 Grade II Delaware Handicap slated for July 13. Another Broad, a 4-year-old Include mare, exits a fourth-place finish in the Grade III Allaire DuPont Distaff Stakes at Pimlico and before that, won the Top Flight Invitational at Aqueduct. Goodonehoney, a 4-year-old by Great Notion, was last seen finishing third in the Serena' Song at Monmouth a month ago.

Sunday's $125,000 (Canadian) Grade III Trillium at Woodbine has a field of 11 to go 1 1/16 miles on the all-weather track. Last year's Woodbine Oaks winner, Dixie Moon, makes her second start of the year and drew gate No. 4.

Saturday's $250,000 Grade II Wise Dan Stakes, a Breeders' Cup "Win and You're In", drew a full and very contentious field. Among the 14 in the main body of the field plus one "also eligible" linemaker Mike Battaglia couldn't make anyone lower odds than 5-1 and has two at that figure -- Itsinthepost and Admission Office. Another three are at 6-1 on the morning line -- Inspector Lynley, March to the Arch and Cullom Road. Others are capable, too. The wild card is Chilean import El Picaro, a three-time Group 1 winner in his homeland who makes his first North American start for Ignacio "Nacho" Correas IV.

Already in the books: Eons broke last of four in Wednesday's $50,000 Stanton Stakes for 3-year-olds at Delaware Park, moved to challenge at the furlong marker and got home first by 1/2 length. Credit Swap finished second but was relegated to third by the stewards for interfering with Five Star General, who inherited place money. Regally Irish was a distant last. Eons, a Giant's Causeway colt, ran 1 1/16 miles on firm turf in 1:43.94, scoring his third career win under Trevor McCarthy. The Stanton is the local prep for the $200,000 Grade III Kent Stakes to be run on July 6.

Sunday's $75,000 Possibly Perfect at Santa Anita isn't a big deal in and of itself but with the Breeders' Cup slated to run here in November, it's worth a look. And the names worth noting include Zaffinah, Pantsonfire, Lynne's Legacy and Lemoona. All have been mixing it up in graded stakes company in Southern California.

Nine signed on for Sunday's $300,000 Grade III Poker at 1 mile on the Belmont Park greensward. Chad Brown brings Ticonderoga, a 5-year-old son of Tapit who hasn't had much success at this level but tries to reverse his luck cutting back in distance. Most of the others look at least as well equipped. Dr. Edgar, who drew outside, comes off a second in the Grade II Fort Marcy and seldom runs out of the money. Races like this are helping make turf racing more popular in the United States.

With Royal Ascot locked and loaded for its Tuesday start and the Asian racing centers gearing down for the summer, not much is on tap this weekend.

The one Group 1 event is the Prix de Diane Longines for 3-year-old fillies at Chantilly. The heavy antepost favorite is the Aga Khan's homebred daughter of Pivotal, Siyarafina, undefeated in three starts. She won the Group 1 Saxon Warrior Coolmore Prix Saint Alary at Longchamp in her last outing.

The New Zealand Government confirmed the Conghua Equine Disease Free Zone maintains a health status equivalent to that of Hong Kong. The decision means that horses that have been in Conghua no longer are required to achieve 180 days continuous residency in Hong Kong prior to export to New Zealand.

HKJC Executive Director Andrew Harding said the approval "greatly enhances our horse movement arrangements with New Zealand and will be of considerable assistance to racehorse owners."

And we note with great sadness the passing of John McEvoy, a masterful editor and columnist for Daily Racing Form for many years, a welcome fixture in Chicago-area press boxes, handicapper extraordinare, successful mystery novelist in his post-DRF years and a general all-around nice guy.

Mr. McEvoy passed away Sunday at age 83. Services are June 29 at St. Mary's in Evanston, IL.